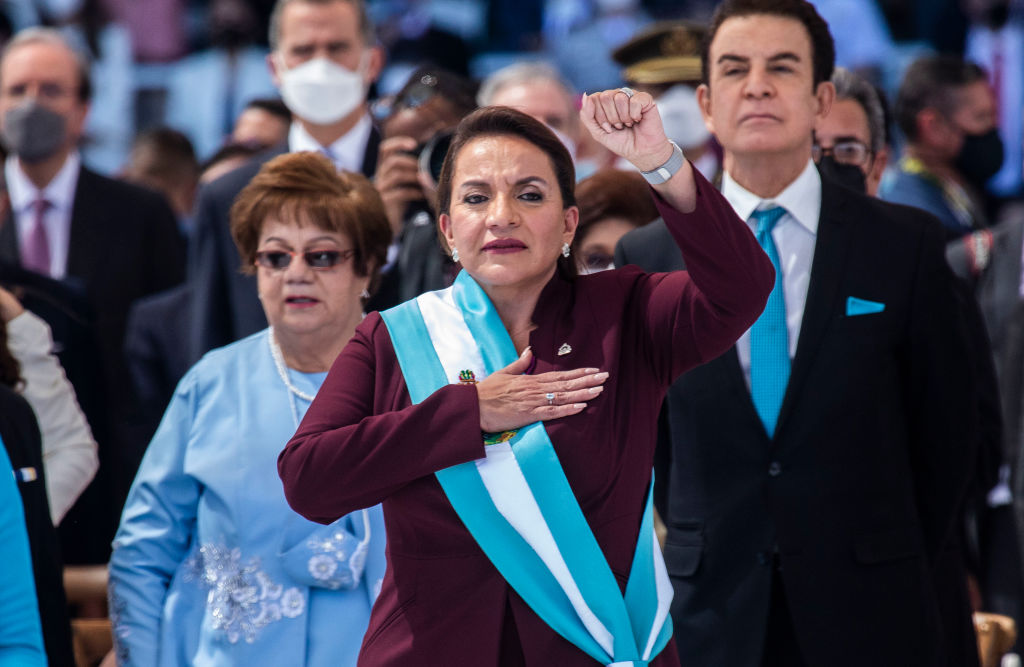 It’s a historic new era for Honduras, where the people managed to defeat Juan Orlando Hernández’s narco state and elect Xiomara Castro, the country’s first-ever woman president, and a progressive to boot. As presidential candidate of the left-leaning Libre Party, Xiomara Castro won a landslide victory and was inaugurated on January 27 in a ceremony at the National Stadium, attended by thousands of enthusiastic supporters.

Turning the traditional Spanish activist slogan from “Sí se puede” (Yes we can) to “Sí se pudo” (Yes we did), Hondurans inside and outside the stadium heaved a sigh of relief that the twelve-year nightmare of the National Party’s rule had come to an end. The transition from the 2009 coup — in which Castro’s husband, former president Manuel Zelaya, was ousted from the presidential palace and spirited out of the country in his pajamas — to Xiomara Castro donning the turquoise and white presidential sash in the presence of her husband was, as the master of ceremonies declared, a historic “return of legality.”

For a tiny Central American country of less than 10 million people, Castro’s inauguration was an international event, with attendees including US vice president Kamala Harris, the King of Spain Felipe VI, and Argentina’s popular vice president, Cristina Fernández de Kirchner. Throughout the continent, the Latin American left celebrated her victory as giving momentum to the “second pink tide” of progressive governments sweeping the region, a tide that will soon include Gabriel Boric in Chile and, hopefully later this year, Brazil’s Luiz Inácio Lula da Silva and Colombia’s Gustavo Petro.

Castro’s agenda for cleaning house is vast. She called for “no more death squads, no more silence on femicides, no more hired killers, no more drug trafficking, no more organized crime.” She even used the term “democratic socialism” to describe her agenda.

But Castro faces intense challenges going forward. She inherits one of the most violent countries in the world, where the majority of homicides are connected to gangs, organized crime, and drug trafficking; and collusion between government officials, state and private security forces, paramilitary groups, and business leaders is widespread. Honduras is also a nation with a biased and corrupt judiciary that routinely fails to bring perpetrators of violent crimes to justice.

Castro also inherits a nation battered by crushing debt, immense inequality, coronavirus, and recent natural disasters such as intense rains, droughts, and hurricanes. Castro said, “I receive a country bankrupted after twelve years of dictatorship. We are the poorest country in Latin America. That explains the caravans of migrants fleeing northward, risking their lives.”

She pledged free electricity for the country’s poorest citizens and a reduction in fuel prices. But given the bare government coffers, her policies will be constrained by the dictates of foreign donors — especially the United States. Castro will also be constrained by the Honduran Congress, which is in the midst of an intense power struggle that has muddied the waters of her victory lap.

During the elections, the Salvation Party of Honduras (PSH) agreed to support Xiomara Castro in exchange for the positions of vice president for PSH leader Salvador Nasralla and congressional leader for PSH congressman Luis Redondo. But twenty-one deputies from Castro’s Libre Party broke away and colluded with the conservative National Party to elect Jorge Cálix as the head of Congress. A pathetic spectacle of pushing, shoving, and shouting on the floor of Congress was followed by two separate swearing-in sessions. Now there are two separate congresses.

Charges of constitutional violations have been filed by both sides, and criminal charges have been filed against Redondo for usurpation of public functions and falsification of documents. In an effort to solve the crisis, Castro offered Cálix a cabinet position, but he turned it down, reportedly because of opposition from the rest of his coalition.

It is not clear how the congressional crisis will evolve, but it has strengthened the conservative forces in Congress and, with the Libre Party so divided, the task of governing and passing a progressive legislative agenda will be even more complicated.

There are, however, measures that Castro can take on her own, such as addressing the plight of women in a country that has Latin America’s second-highest rate of femicide (the killing of a woman by a man because of her gender). According to the National Autonomous University of Honduras, a woman is killed, on average, every twenty-three hours.

Castro framed her entire speech with a message to the nation’s women. She opened by declaring, “The presidency of the republic has never been assumed by a woman in Honduras. We are breaking chains and we are breaking traditions,” and closed with a pledge: “No more violence against women. I am going, with all my strength, to close the gap and create the conditions for our girls to fully develop and live in a country free of violence. Honduran women, I will not fail you. I will defend your rights — all your rights. Count on me.”

Women’s rights groups have been working with members of Castro’s transition team to draft a violence against women law that will address the difficulties of bringing violators to justice; she also advocates shelters for women who are survivors of domestic violence. While Castro is a strong advocate for women’s rights and sexual diversity, issues such as abortion or equal marriage are a bridge too far in the conservative, Catholic country. Also, the congressman Castro is advocating for as head of Congress, Luis Redondo, is anti-abortion, anti-LGBT, and does not have the support of Honduran feminist groups.

The issue of abortion is more complex. Castro wants to legalize abortion in the case of rape, when the mother’s life is at risk, or when the foetus is not viable. But when a similar measure came to a vote in 2017, only eight of the 128 legislators voted in favour. To make matters worse, last year, conservatives in Congress raised the threshold needed to modify the country’s total abortion ban to two-thirds of Congress.

Castro has also called for amnesty for political prisoners and justice for the many Hondurans who have lost their loved ones at the hands of the police, the army, paramilitaries, and hitmen, often for opposing illegal logging, mining, and construction of hydroelectric dams.

Castro is also calling for accountability for the abuses of outgoing Honduran president Juan Orlando Hernández (JOH). JOH’s brother has been sentenced to life imprisonment in the United States for smuggling large quantities of cocaine into the United States. During his trial, the president’s name came up more than one hundred times for complicity with a local cartel.

The popular clamour for JOH to be extradited and tried in the United States was evident during the inauguration. When Kamala Harris was introduced, the crowd broke out in a raucous chant of “Take JOH back, take JOH back!” implying that the US government had backed the scoundrel and should now hold him accountable.

But JOH won’t be going to jail any time soon. The very day of the inauguration, he was sworn in as a Honduran representative to the Central American Parliament — a tradition for Central American ex-presidents that, unfortunately, will likely guarantee him diplomatic immunity for the next four years.

Lastly, Castro will have to contend with Honduras’s giant neighbour to the north. The United States is Honduras’s largest donor and trade partner, and the US military maintains a foothold at the Soto Cano Air Base. Vice President Harris’s appearance at the inauguration was taken by many Hondurans as a positive sign that President Joe Biden has a stake in making Castro’s tenure successful — if only to stem the mass migration that has dogged his presidency. But they also saw Harris’s presence as a sign that the United States is closely watching President Castro and will try to keep her in line.

Castro immediately asserted her independence by returning the Venezuelan embassy in Tegucigalpa to Nicolás Maduro’s government (it had been usurped by the US-supported fake president Juan Guaidó). On the other hand, it is rumored that US pressure stopped Castro from immediately switching allegiances from Taiwan (a big contributor to projects in Honduras) to China, as she had proposed on the campaign trail. Castro’s next four years will likely be a delicate dance between keeping good relations with the United States and integrating more into the Latin America left.

For the moment, millions of Hondurans are basking in the “Xiomara glow.” “She is a forceful woman who has fought alongside us,” said human rights lawyer Priscila Alvarado, as she left the inauguration elated. “We have hope and faith that she will govern for the people and with the people. And millions of Hondurans who voted for her will be there to back her up.” (IPA Service)