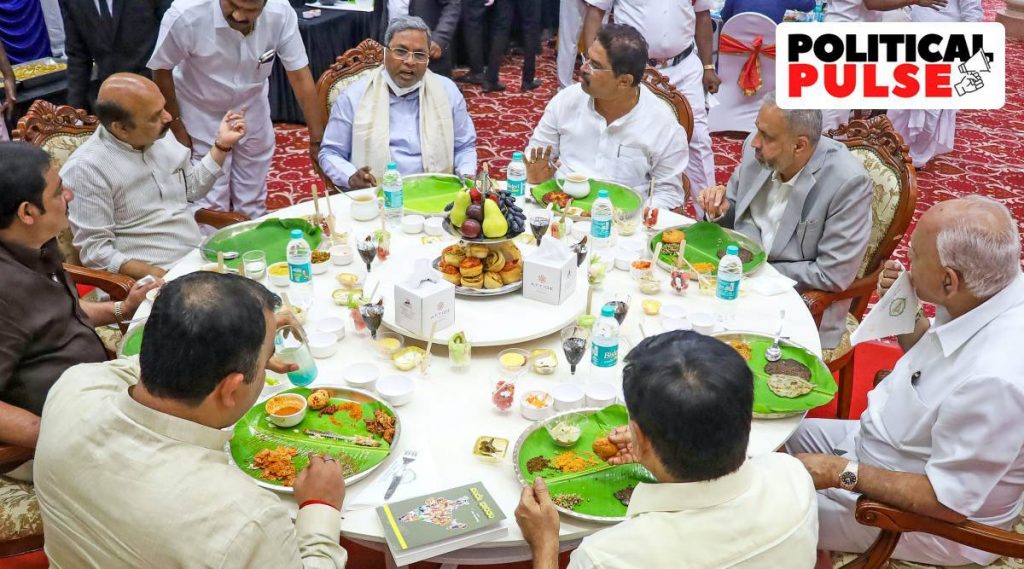 The BJP in Karnataka is leaving no stone unturned in achieving the permanent marginalization of Muslims in this once cosmopolitan state. A determined march towards realizing (more legitimacy and respectably than in 2018) to the BJP in 2023 has begun. The Bajrang Dal, Jangjaruti Samiti, and the Sri Ram Sene, despite minor squabbles with the ruling party, are joined by ordinary Kannadigas to enable this rapid political, social and economic disenfranchise. An ever lengthening list of accusations against Muslims finds a credulous and receptive audience— for allegedly depredation in the past (building mosques on the site of temples), for plans for the future (the community devious demographic designs) or for merely existing.

After months of attacks—via threat of actual violence, or through multiple court cases and government orders on hijab, halal, azaan, and the Muslims commerce at Hindu jatras—comes the latest mode` by which the Muslim abjection is ensured. In February, Harsha Hindu, a member of Bajrang Dal was murdered in Shivamogga. Initially, the police stated that the murder was a “localized crime stemming from long standing communal rivalry” and cited his communal record—five cases of assault and attempt to murder with communal overtones, including participation in a mob attack on Shivamogga’s Muslims traders in December 2020. But soon, the police—instead of investigating the murder—managed to find a larger Islamic conspiracy. Chief minister B Bommai presented the family with a cheque of Rs. 25 lakhs from the state funds. Similarly, in April, the death of a young man, Chandru, in a road rage case was given communal overtones by the political leadership, despite police assertions to the contrary.

Karnataka, it seems, has gone beyond the assertion that a Hindu can do no wrong to conviction that Muslim can do no right— even in representations. The play—Jotegiruvana Chandira—or the Moon will be With Us— loosely derived by Jayant Kaikini from the fiddler on the roof– had been performed for the past one- and- half decades without incident. It became “unbearable” to a small group of Bajrang Dal activist of Sorab taluk, Shimogga district on July 3. They terminated the performance because it portrayed Muslims in a good light. The police, who were at first unaware of the reasons for the disruptions, nevertheless upheld it, even giving the Dal time to think of other equally illegal “reasons” for stopping the performance. That it portrayed an inter-faith alliance? Or that no play talking good of Muslims can be performed in a Lingayat-owned hall? How does it matter since we have heard nothing since?

Even more surprising was the up-complaining acquiescence of the audience to this abrupt end to their entertainment. For sometime now, despite a small, spirited and vociferous push back by some Kannadigas, there has been wide spirited acceptance of, and even active agreement with, the stand of the Hindu Right. The “nuisance” posed by azaan, the unacceptability of the “cruelty” of halal, the unfairness of Muslim stalls at Hindu festivals, (or indeed of any kind of successful Muslim business, WIPRO exempted), and the necessary redressal of unfair “weightage” given to Jainism, Buddhism and Muslim rule in Karnataka text books appear now to be a vocalized common sense of large section of Hindus.

Scrubbing public memory clean of Karnataka’s syncretic traditions, whether practice (as being attempted through claims to the Paduka Puja at Bababudangiri) or in ending “salam mangalalarthi” in the name of Tipu at Kollur Mookambikaka or in text book representations, has been made easy.

Hindu claims to tolerance, a commitment to gender equality, and other noble virtues are also missing.. In March, to buttress the righteousness of its decision on the hijab ban, the Karnataka High Court quoted at length B R Ambedkar’s lament about the deplorable fate of veiled Muslim. Thus, patriarchy is made coterminous with one religion, while the majority shoves its own foundational inequality behind Ambedkar’s shoulders.

The increasing communalism of the Hindu right drowns out the allegation of corruption and depredation involving leading political rights of the BJP, the ruling party.. We hear no more, for instance, of “sikri” or Srikrishna, the young master mind behind massive crypto- currency scam after he was arrested and released on bail within days. Minister K S Eshwarappa has now been cleared of culpability for suicide of one underpaid PWD contractor, despite his suicide note and contractors’ anger about the unbearable burden of the 40 per cent bribe allegedly demanded by the state’s ruling party. Daily denials are issued about the industrial-scale rigging of examination to recruit 545 police sub-inspectors. (IPA Service)