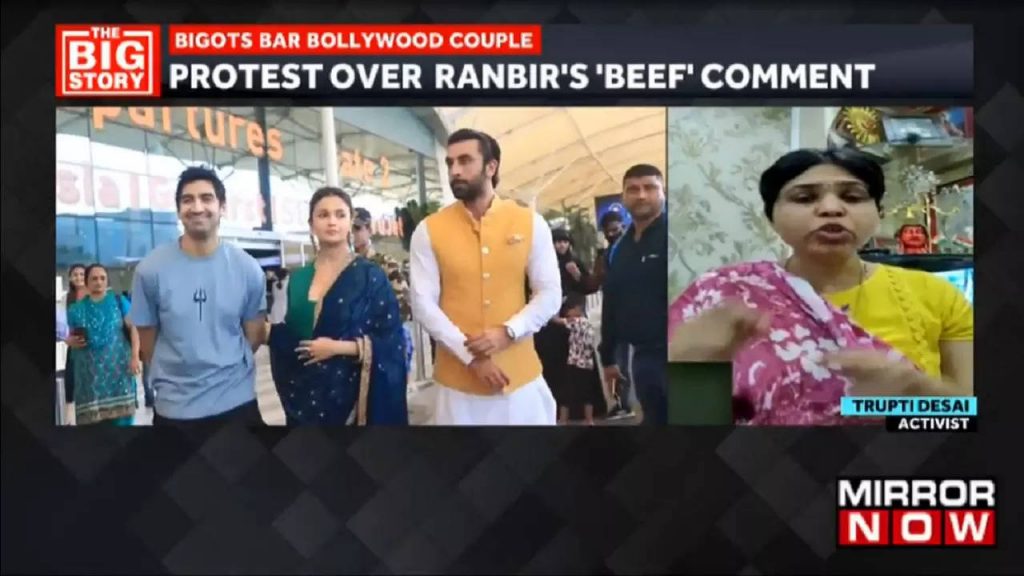 The only real-time missile that can possibly stand up to the filmic ‘Brahmastra’ is the Brahmos, an Indo-Russian collaboration. But Brahmos doesn’t face a boycott like #Brahmastra does though on the eve of its worldwide release, trade analysts are painting a rosy picture of its “first day, first shows” showing, quite unlike the fates of #Liger and #LaalSinghChadda which went under without creating any trace of a slipstream.

Actors Ranbir Kapoor and Aaliya Bhat’s ‘Brahmastra’ has the Hindu right on their back and it’s scary. This same batch of people had in recent days drowned not one, not two, but three and four Bollywood flicks. And Brahmastra releases September 9 with the Damocles Sword hanging low over its head. Much to their disgust, #BoycottBrahmastra and #BoycottBrahmastraMovie have been trending with a vengeance.

Which is what it’s all about. The Hindu right accuses Bollywood of fudging Hindu culture and belittling Hindu gods. And Bollywood bigwigs including actors and directors laughed at the suggestion. They didn’t take the accusations seriously, till now.

For the makers of #Brahmastra, the past few weeks have been sleepless. They are looking for an elusive ‘Blockbuster’. #Brahmastra was a movie in the making for eight years. #Brahmastraismulticolour laser show, say those who wouldn’t mind if the film bombed at the Box Office.

#BoycottBrahmastra and #BoycottBrahmastraMovie are trending amid reports that producer Karan Johar has “bought” the attention of film critics to declare #Brahmastra a “super-duper” hit. KJo has deep pockets and the deep faith of a secular. For him money is not a problem. So much so, the Hindu right, which is at the back of #BoycottBrahmastraMovie, is feeling the pressure of the dollar speaking. A couple of pro-Brahmastra hashtags are giving out mixed signals and KJo’s counteroffensive appeared to be working in the last two days.

Social media was suddenly not all against #Brahmastra. Some of the overzealous went to the extent of associating #Brahmastra with the #BharatJodoYatra. In their book, just like ‘Bharat Jodo Yatra’ would unify India, so would #Brahmastra, a secular initiative that will bring all of the peoples of India, both on-screen and off the screen together.

‘KJo’ had pumped in over Rs 500 crore in the making of Brahmastra, which needs to be recovered. A fate similar to Aamir Khan’s #LaalSinghChadda will bleed KJo, enough that he never repeated a similar bravado. If #Brahmastra flops, KJo would henceforth count his pennies before he risked his pounds.

The Hindu right’s economic boycott has hit Bollywood where it hurts. The Hindu right says ‘Bollywood’ is a D-Company blot with an ISI plot to bring about long-term changes in India, paint it a deeper shade of the green that envelopes Pakistan; that “Dawood’s Money” finances Bollywood, and the “Islamisation of Bollywood” is well-past the danger mark. That ‘Salaam-wallekam beats ‘Ram-Ram’ in almost every Bollywood movie made.

Bollywood is a business. And box office hits make all the difference to the film fraternity. Yet a handful of fast operators control the industry and the system. For some reason, Bollywood chose to tag with Urdu poetry, and the Mughlai in both lifestyle as well in its messaging. Clips of Amitabh Bachchan singing praise of Mughal culture and Mughal conquests dot Social Media. And Bachchan Sr., is a crucial cog in #Brahmastra. If the film bombs, “Bila No.786” will be one of the reasons.

In the “new Bollywood”, producers will steer clear of some actors and among them Amitabh Bachchan. Now there is also Ranbir Kapoor, whose love for beef didn’t digest well with Hindu vegetarianism. Ranbir Kapoor and his wife Aaliya Bhat could do with a happy repaste of their choice!

There’s also a lesson for political parties in the travails of Bollywood brought about by the right-induced #BoycottCulture. When these folks slap boycotts on people and films and products, it actually works. Post the boycott of Ajmer Sharif following the Kanhayalal beheading, most of the city’s commerce was brought to a standstill.

It’s a test for the secular parties, a glimpse of which was seen in the Uttar Pradesh elections. Like it or not, if the BJP polarises and persuades the majority Hindus to vote BJP, it will be a kind of reverse voting osmosis. For a longtime, voting en bloc has been associated with Muslims voting for the Congress, and the Samajwadi Party. The #BoycottBollywood is proof that the tables can be turned. (IPA Service)

Women Can’t Wait For Another 300 Years For Gender Equality
Posting....