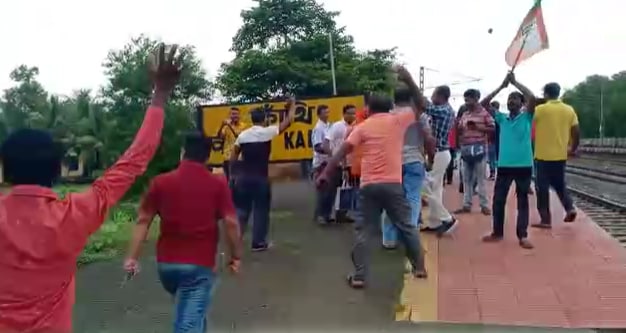 The Calcutta High Court on Tuesday sought a report from the West Bengal Home Secretary over the allegation that BJP supporters were forcibly prevented from attending its march to Nabanna programme. A division bench comprising Chief Justice Prakash Shrivastava and Justice R Bharadwaj also directed the state government to ensure the protection of the BJP state headquarters in Kolkata.

The bench directed the state authorities to ensure that no unnecessary arrest is made and no person is unnecessarily detained in connection with the rally. The court directed the state Home Secretary to submit a report by September 19 over the allegations made by the BJP that its supporters were forcibly prevented from attending the rally.

The bench observed that peace and tranquility are required to be maintained. The petitioner in his PIL claimed that BJP workers were forcibly prevented from attending Tuesday’s rally and party leaders were attacked.

Streets of West Bengal turned into a battlefield on Tuesday with BJP workers clashing with the Bengal Police during their ‘Nabanna Cholo’ march to the state secretariat to protest against the ruling Trinamool Congress (TMC) government.

Several police officers and saffron camp members, including leaders Mina Devi Purohit and Swapan Dasgupta, were reportedly injured in the clashes between BJP and the Bengal Police during the protest march while top Bengal BJP leaders were also detained on Tuesday. Sources say Mina Devi Purohit is critical.

Leader of Opposition in Bengal Assembly Suvendu Adhikari, the party’s Hooghly MP Locket Chatterjee and senior leader Rahul Sinha were among those detained during the march. The police used tear gas and water cannons to disperse the agitators, who tried to go past the barricades that were put in place at several points in the city and its adjoining areas.

The ruling Trinamool Congress will move a motion in the assembly against the “hyperactive” drives by central agencies like the Central Bureau of Investigation and the Enforcement Directorate in West Bengal.

A short session of the assembly will be held from September 14 when the motion will be moved. Assembly Speaker Biman Bandopadhyay said on Monday that a proposal on the motion has already been submitted in the assembly.

“There will be a discussion in which members of both the treasury benches and the opposition will participate. An atmosphere of tension and fear is being created in the state. The central agencies’ officials are reaching the residences of people at odd hours. There will be discussions on this matter,” the Speaker said.

The decision to move the motion was taken at a working committee meeting of the assembly on Monday, which was attended by several ministers and MLAs of the ruling party, besides the Speaker and the deputy speaker, Asish Bandopadhyay. However, none of the BJP legislators, who are members of the working committee, were present at the meeting.

TMC on Tuesday in a tweet slammed the BJP by saying a “bunch of rioters and hooligans who neither understand peaceful protest, nor allow peaceful coexistence”.

“We condemn this brazen attempt to destroy public peace and damage to Government property. Mamata Banerjee who is in Medinipur for administrative meeting stated that BJP did not have people in rally,” the TMC said.

The real face of @BJP4Bengal.

A bunch of rioters and hooligans who neither understand peaceful protest, nor allow peaceful coexistence.

We condemn this brazen attempt to destroy public peace and damage to Government property. pic.twitter.com/Q090FULaO6

No move for single opposition leader at national level: Yechuri