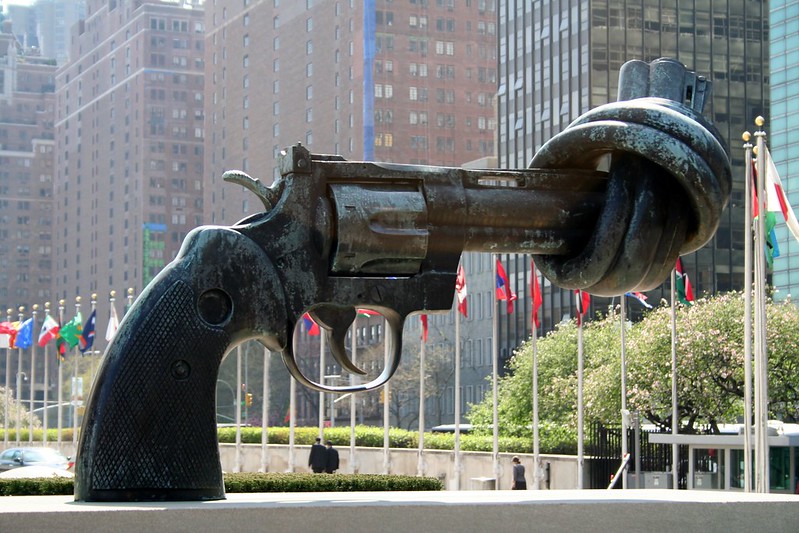 The investigations into murder of Punjabi Singer Shubhdeep Singh Sidhu, popularly known as Moosewala in the Punjab state of India should not be limited only to tracing the murderers and members of the gangs involved, or that how was the AK 94 gun used to kill was procured by them? This is time to think beyond that and pin point the manufacturers and traders of the small arms who in the so called modern day civilized society are dealing with something that is made solely to kill.

Moosewala case has come to limelight because he was a popular singer. Otherwise there are hundreds of gun violence killings taking place around the world every day. It is atrocious to hear about firing by school children in the USA. The children who should be studying and playing are instead carrying guns and are on a firing spree killing their own mates !

Killer gangs have been associated with drug smugglers and other mafia groups around the globe. Guns are sold to various groups illegally worldwide and are used for creating internal strife, ethnic conflicts and to create instability. Rwanda, Somalia, Afghanistan are few recent examples of such blatant use of small arms. Women and children are the worst sufferers in such situations.

Despite demands for banning illegal trade in small arms, such trade continues to flourish. Sales of weapons and military services by the world’s 100 biggest arms companies reached a record $531bn in 2020, an increase of 1.3 per cent in real terms compared with the previous year, according to the Stockholm International Peace Research Institute (SIPRI). World’s top 100 arms producers increased their sales — even in the pandemic year of 2020 when the global economy was contracting. United States has 39% share in the arms exports, Russia 19%, France 11% and China 4.6%.

The International Physicians for the Prevention for Nuclear War (IPPNW) has been in the forefront of raising awareness about the harmful effect of the gun violence. At the  8th Biennial Meeting of States of the UN Programme of Action (UN PoA) on Small Arms and Light Weapons at the UN headquarters in New York City the IPPNW expressed anguish at that even after over two decades of the international agreement of 2001 to reduce human suffering the goal has not been realized. Health effects of the horrific gun violence that continues worldwide range from death to physical injury to mental and emotional consequences that can last a lifetime.

IPPNW has advocated for decades that gun violence is a public health crisis, not just a police and security issue. The IPPNW in the statement submitted to States Parties of the UN PoA said that “IPPNW is a non-partisan federation of national medical groups in 55 countries representing tens of thousands of health professionals who share the common goal of preventing nuclear and armed violence. We urge delegates to the BMS 8 to understand and accept that small arms violence is a preventable public health crisis as determined by the World Health Organization. Limiting access to guns, and stemming the illegal gun trade, are two preventable measures. Another is reducing demand for guns”.

Gun violence changes the life of the effected persons and their families. The injuries affect their ability to work and function in society, often both physically and mentally. Gunshot survivors have an increased risk of mental illness, including depression, Post-Traumatic Stress Disorder, suicide and substance abuse disorders. The risk of developing or worsening chronic illnesses such as heart diseases increases due to the stress of recovery. Intimate partner violence, coupled with guns, poses an even more significant risk to the health and well-being of women and men. Survivors of intimate partner violence have higher rates of at-risk pregnancies and sexually-transmitted diseases.

To many worldwide, the threat of gun violence has become a “way of life.” Living in this culture of fear can lead to negative health effects similar to those who have sustained a gunshot wound. The most important aspect of gun violence that should never be forgotten is that every case is a face, a family, and a community, and sadly, a long journey of rehabilitation and significant expense, from the individual to the government levels.

Gun violence has to be treated like a public health issue and managed in the same way as other diseases such as polio and smallpox, by identifying the problem and its impact on society, its risk factors, and developing interventions, policies and programs aimed at targeting those risk factors.

The IPPNW has pointed out that arms control measures need to be part of a wider spectrum of policy solutions – intersecting security, crime, human rights, health, and development.  As such, healthcare professionals and policymakers can be powerful allies in armed violence prevention worldwide.

The IPPNW has been proactively advocating complete check on the manufacturing of guns and their trade. For this the organisation has carried awareness campaigns in different parts of the world. In June 2013 the IPPNW organised a protest march outside the gun making factory Heckler & Koch near Villingen-Schwenningen in Germany.  The slogan is “make toys not guns”.  (IPA Service)