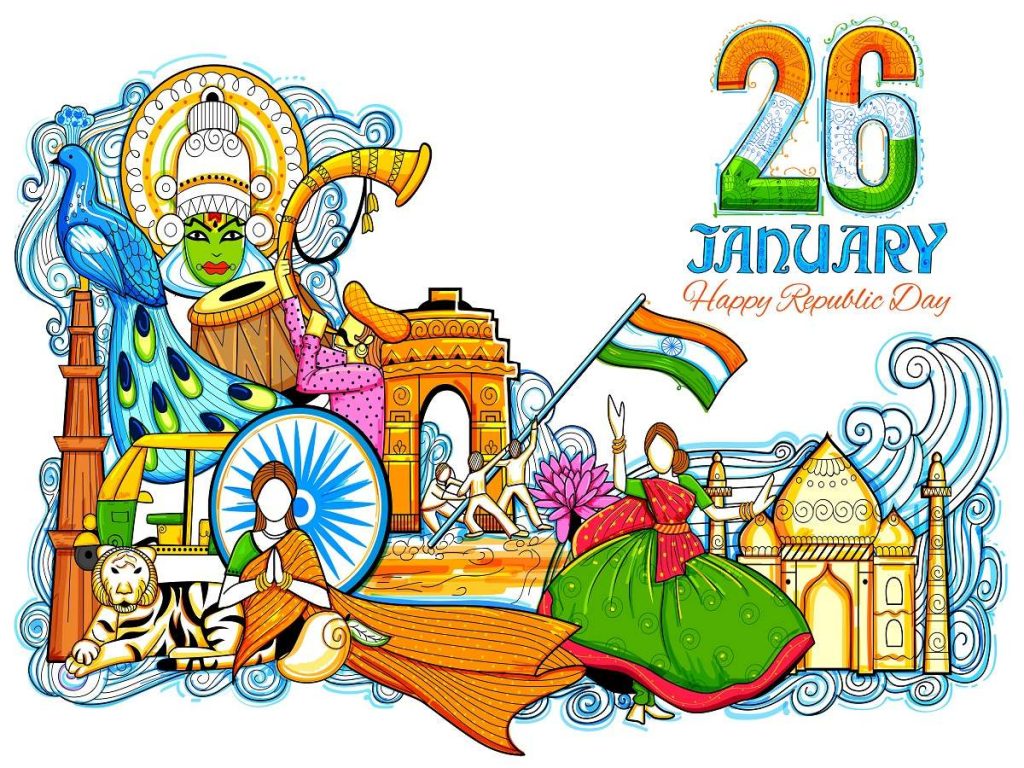 On the 75th year of independence, India has just celebrated the 72nd anniversary of her becoming a Republic. ‘We, the people of India’ will naturally look back to the sagas of struggle waged by our predecessors for the liberation of this great country. The foundation of the Republic and the Constitution is the outcome of those immense struggles and sacrifices. Various streams of thoughts and paths of resistance came together around the common cause of freedom. The fight was unique and consistent that the mighty British imperialism was forced to pack up and return.

The colonial oppressors used the venomous weapon of ‘divide and rule’ to sustain their unwanted hegemony over the freedom-loving people of India. Religious fundamentalism was used by them as a tool to meet their ends. Since those days, India’s secular values came under attack from the forces of religious fundamentalism and obscurantism. As a result, the country was divided into two with the support of the imperialist masters. India’s commitment to democracy, secularism, sovereignty and socialism are not at all accidental. It is the sum and substance of a great struggle against a foreign rule which lasted for about 190 years. A free and prosperous India was the promise of the freedom movement. At the call of that promise people fought and won the battle.

Even after this Republic Day the confrontation between religious fundamentalism and secular democracy remains the decisive factor in national life. The RSS-controlled BJP that rules the country has only superficial allegiance to the founding principles of the Republic. Time and again they spit venom against the cardinal ideas of the Constitution. According to them, secularism is a western concept, democracy is unwanted, and socialism is alien. All their programme and policies are moulded in the framework of this philosophy of hatred.

Today the fascist philosophy of RSS-BJP poses the biggest challenge before India and her people. Fascism knows how to hoodwink the people by hiding their real face. The history of fascism is full of false promises that they placed for the people in order to capture political power. Once they got it, all the promises are thrown to the winds. ‘Sab ka Vikas’ was the watch word of Prime Minister Narendra Modi on his journey to political power. But hunger and poverty, tears and sorrows of the poor are not at all taken into consideration during his governance.

The pandemic days revealed the bitter reality hidden in the ‘Sab ka Vikas’ programme. Hunger and sorrow that engulfed the poor man’s India is beyond imagination. Even before the pandemic, malnutrition and child deaths were haunting the country. According to the State of Food Security and Nutrition in the World (SOFI) report, which is said to be the most authentic evaluation of hunger and food insecurity in the world, food insecurity increased by 3.8 percent in India between 2014 and 2019. By 2019, 6.2 crore more people were living with food insecurity than those in 2014. The number of food insecure people galloped from 42. 65 crores in 2014-16 to 48. 86 crores in 2017-19.

Also, India accounted for 22 per cent of the global burden of food insecurity, the highest for any country in 2017-19 says The Hindu dated August 24, 2020. As per the National Family Health Survey (NFHS) report of 2015-16, 50.4 percent of pregnant women were anaemic, 8.8 lakh children under five years died in 2018 in our country (The State of the World’s Children report-2019, UNICEF). This report pointed out that malnutrition is the cause of 69 per cent under five deaths. The Global Hunger Index 2021 talked about an India that lowered its position to 101 among 116 countries, from its 94thposition in 2020. We are placed lower than Pakistan, Bangladesh and Nepal. The pandemic has only worsened the situation. It made the lives more miserable for the under-privileged.

The workers in the unorganised sector which constitute more than 90 per cent of the workforce were the badly-affected victims. The country cannot forget those scenes of the large-scale exodus of the migrant labourers, who were walking hundreds of kilometres to reach their native villages to save themselves from poverty and death. Dead bodies of the poor were seen floating on the Ganges during those days. The government has not kept an exact data of those who died during Covid, no matter whether due to lack of food or shortage of oxygen cylinders. While the shock waves of the pandemic undermined the living standard of the working masses, statistics say that the super-rich could register 35 per cent growth in their profits. When the rehearsal for the Republic Day celebrations were in progress, 145 people died in the capital city itself in severe cold waves.

On the face of these living realities what can the people of a sovereign democratic county do? They would naturally think about their future and try to find out ways for rectification in its path of growth. Azadi ka Amrit Mahotsav urged the citizens of India to take up that task on their shoulders. It is their paramount right and duty to strive for a new India, where the basic structure of the Constitution is safeguarded, where democracy, secularism, national sovereignty, and socialist goals are protected from all sorts of attack.

The biggest threat today at this historic juncture is that the attempts to undermine the Constitution emanates from within. In a true democracy rights and duties are inseparable. The British colonialists also tried to undermine people’s rights by putting emphasis only on duties. At the 75thyear of independence, the RSS-BJP is trying to borrow the colonial theory of ‘duty at the peril of rights’. ‘We the people of India’ understand the nefarious designs behind the government move. We tell them that it is our duty to struggle for our rights. Only that struggle can save India and her secular democracy. (IPA Service)

Privatisation Of Financial Sector Jewel LIC By Modi Govt Must Be Stopped
Posting....