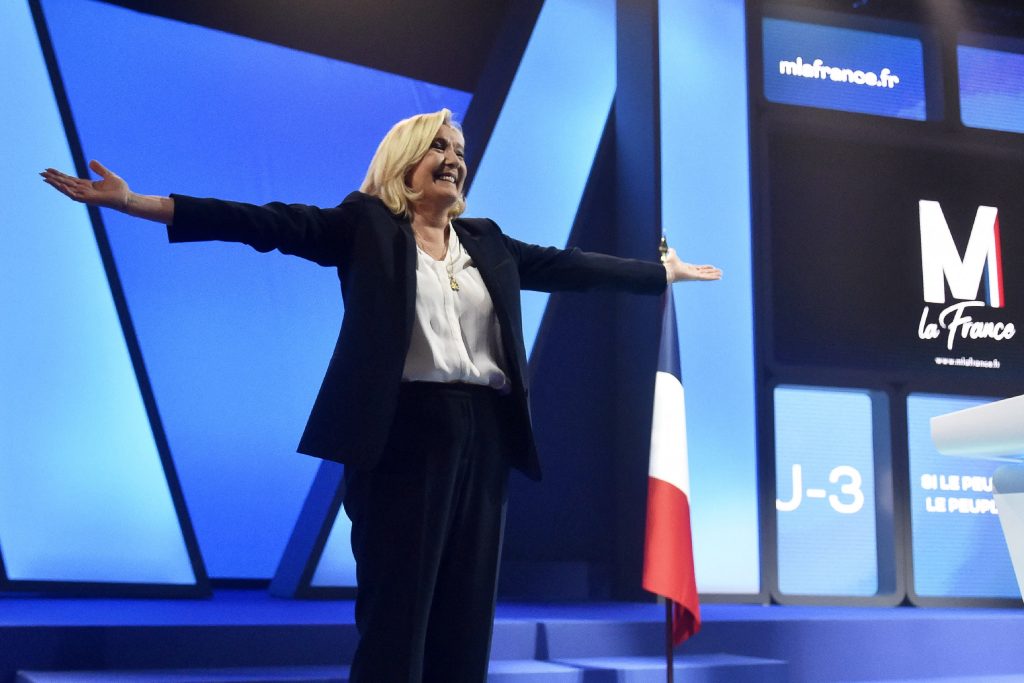 Incumbent President Emmanuel Jean-Michel Frédéric Macron representing La République En Marche had a slight edge over the far right Marion Anne Perrine “Marine” Le Pen of National Rally in the first round of French presidential poll held on Sunday – having received 27.6 per cent and 23.4 per cent respectively. Almost neck to neck were the conservative Francois Fillon and the so-called far left Jean-Luc Antoine Pierre Mélenchon of La France Insoumise got 20 per cent and 21.9 per cent respectively. . The second and final polling when the voters are to vote for either of Emmanuel Macron and Marine Le Pen is due on 24 April.

The results cement the idea that France has moved beyond the traditional left-right divide that has dominated post-war politics, and inching toward a battle pitching anti-immigration nationalists, represented by Le Pen, against pro-European progressives who are open-minded on the issue of globalization. Small wonder, the candidate of Communist Party of France failed to receive even 3 per cent of votes reflecting the voters chagrin towards official Marxist party in the year 2022.

Apparently, the possibility of Macron’s reelection to remain in the Élysée Palace, the seat of the French President is high. But the reality seems grim as Le Pen has chances of fetching Fillon’s total votes and if that happens she might edge out Macron in the final act of the poll drama. The adversarial factor for the far-right challenger Le Pen is her longtime camaraderie with Russian President Vladimir Putin is in a disadvantageous state when the overwhelming majority of Europeans are getting increasingly hateful of the ‘neo-Hitler’ Putin. Le Pen’s cozy relations with the Kremlin and party loans from a Russian bank may act a negative factor towards success.

However, NATO and the European Union will be on tenterhooks for two weeks after ultra-right directly challenges Macron, more so as Le Pen has triggered alarm by stating her desire to pull the EU’s only nuclear power out of the alliance’s integrated command structure. Her slogan is “so as to be no longer caught up in conflicts that are not ours.” In the intervening fortnight, the debate on 20 April will turn into a decisive encounter where Le Pen will leave no nerve unstrained to project a more polished image in contrast to her shaky performance confronting Macron five years ago.

If Le Pen makes it to the Elysse Palace in the second round, she will cause a potential damage to the functioning of the European Union. Her party, NR , has dropped its proposal to quit the EU, the free-movement Schengen zone and the euro. But it is very unlikely that she will give up albeit temporarily her Euroskeptic stance. She might reduce France’s EU contributions and promote a coalition with rightwing regimes of Hungary and Poland. Her supporters were upbeat on Sunday chanting “We will win” and singing the Marseillaise.

Le Pen’s somewhat spectacular performance is due to her protracted campaign for months, touring villages and small towns in a low-cost campaign to reach out to the ordinary French, and her early focus on cost-of-living issues has clicked as inflation and increasing fuel costs hit French budgets. Projecting herself as a champion of the poor and the downtrodden against the elites, Le Pen promises to “give their money back to the French” with a range of generous proposals such as ‘cutting income tax for young adults and slashing VAT on fuel, a measure that is bound to appeal to those who backed the Yellow Jackets protests in 2018 and 2019 against fuel taxes’. Non-Left French people seem convinced, that her economic proposals are sustainable.

Macron has a tough task of winning over Mélenchon votes. Much will now depend on which candidate can pick up the support from Jean-Luc Mélenchon on the far left, which came third in the first round with a vote of 21.9 percent. His voters appear to be split over whom to back in the second round of voting. According to IPSOS, half of Mélenchon’s voters don’t have any choice between Le Pen and Macron, while the other half is split between Macron and Le Pen, with a preference for Macron. So Macron has a hardening task for two weeks.

Although Mélenchon himself called on voters not to cast a ballot in favor of Le Pen in the second round, he didn’t endorse Macron.“[We have] to choose between two evils that are terrible for us and that aren’t of the same nature. Every one of you will face his conscience,” said Mélenchon in his concession speech. Nonetheless he stated emphatically – at least relatively- “We must not give a single vote to Marine Le Pen.”

Macron in his campaign asked the electorate “Do you want a France that speaks of full employment and is serious about paying its social state?” Mélenchon’s supporters term this as ‘essentially vague sans direction’.

IPSOS aside, Macron might scrape through with 51 per cent of the vote in contrast to 49 per cent for Le Pen. The margin of error is too small to predict who will clinch the victory. (IPA Service)