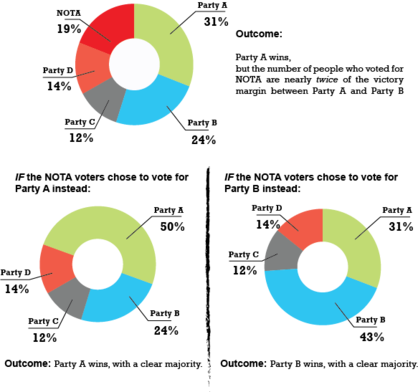 National Employees Pension (1995) Co-ordination Committee, headquartered in Nagpur and affiliated to the Bharat Pensioners Samaj, has shot a letter to the President of India, Chief Justice of India, Prime Minister and all the chief ministers stated that its members unanimously resolved to push the ‘NOTA’ button in the elections of Lok Sabha and state assemblies in protest against non-implementation of the Bhagat Singh Koshiyari Committee recommendations in 2013 to raise minimum pension from the present one of less than Rs 1000 to Rs 3000 along with dearness allowance. The slogan is ‘No Koshiyari, No Votes”.

Mr Koshiary who headed the committee is presently the Governor of Maharashtra. Former chief minister of Uttarakhand .he was a member of both Lok Sabha and Rajya Sabha for different terms. The committee, comprising 10 MPs from amongst both houses of the Parliament was set up for Betterment of lives of unorganised workers and retired employees by way of providing funds through budgetary allocations. The panel was constituted in 2010-11.

The 1297-word letter, signed by its general secretary Prakash Pathak took up cudgels for 30 lakhs’ pensioners who have been ‘getting pension less than Rs 1000 a month from the Employees’ Provident Fund Organisation out of employees’ contribution to the Contributory Provident Fund. ‘This is the only Pension in the country which is not revised or increased since last 20-21 years, though the pensions of MPs, MLAs, MLCs, Central Government employees, State Government employees etc is periodically revised and increased. Non- Contributory pensions like Shrawan Bal pension Yojana, Rajiv Gandhi Niradhar pensions etc are also periodically revised’, it stated.

Slanted towards the BJP, Mr Pathak in an email to this correspondent said that since 2012, the National Democratic Alliance has been supporting the NEPCC. The latter’s frustration is reflected in its letter that accuses the present government at the centre of going back on the commitment to implement the Koshiyari Committee recommendations. It has staged dharna and called on the Delhi office repeatedly, but ‘the Government of India never taken any cognizance of our problems, of the old aged pensioners’., it laments.

Mr Pathak in an email reply disclosed that the national organisation approached Nitin Gadkari, Prakash Jawadekar and some other BJP MPs/ministers who then took up the case. They contacted non BJP MPs since 2008 like Sharad Paxar, Mallikarjun Kharge and N.K. Premchandrana as also former RS member D Raja, presently general secretary of CPI and members, Central Board of Trustees such as AITUC general secretary Amarjit Kaur, ‘but no one is taking up this matter seriously’, alleges Mr Pathak At the same time, the BJP MPs and central ministers whom NEPCC banked on with optimism too disappointed them as they did not effectively pursued despite passage of nine years from submission of Koshiyari panel report containing specific recommendations. The letter snaps fingers at the present regime under the Prime Minister Narendra Modi without directly naming him. Which is why the frustration is explicit.

The NEPCC leader has not spared the Supreme Court in the long letter for denial of justice. Pointing out at violations of Articles 14 (“The State shall not deny to any person equality before the law or the equal protection of the laws within the territory of India.”) and 21 (“No person shall be deprived of his life or personal liberty except according to a procedure established by law.”) of the Constitution of India, it regrets, ‘instead of protecting our constitutional rights, causing injustice to us’ the apex court ‘itself is violating the cannons of natural justice and passing the orders in the favour of the Government of India’. It refers also to the Article 300 that empowers the Union government to sue any authority for denial or abrogation of rights.

NEEPC mentions the SC judgment in R C Gupta versus Regional Provident Commissioner, EPFO, Himachal Pradesh, in October 2016. Pathak expresses his resentment over revision of earlier judgment that the EPFO made a commitment to implement but subsequently filed a review petition against this order which the apex court ‘ very illegally allowed without giving opportunity of hearings to the opposite parties and violating the cannons of natural justice. As per Under the pension scheme (relevant Act of 1995), it is for the operators of the scheme to invest amount deposited so that after the retirement of the concerned employee the invested amount would keep on giving sufficient returns so that the pension would be paid to the concerned employee not only during his life time but even to his family members after his death.

While the rationale of protest letter has solid legal and moral basis, EPFO pensioners whose reaction were sought on exercise of ‘NOTA’ option, over a dozen of them called this an arbitrary option. Whom to vote for is an individual option, they argue.. Senior advocate of the High Court of Calcutta and one of the oldest functionaries of the People’s Union for Civil Liberties Ajay Datta said very bluntly, “Whether the pensioners should exercise NOTA option ought to be decided by secret ballots. Seems the leadership is afraid of votes going against the ruling NDA.’ (IPA Service)

J&K’s Baby Steps To Economic Progress Are Both Ironic And Humbling
Posting....