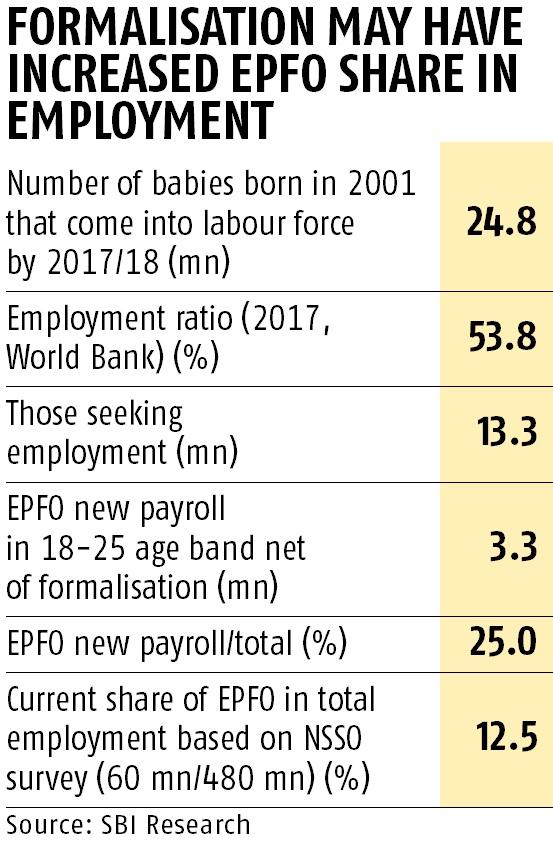 The pace at which India is moving forward in providing social safety net for workforce is too slow to cover entire workforce in years to come. The monthly provisional data just released by the Employees’ Provident Fund Organisation (EPFO) reveals that the situation is still volatile since exit and entry from and into the scheme remains frequent and progress of formalization of the workforce is too slow to cover the entire workforce in foreseeable future under this social security provision meant for providing retirement benefit and pension in old age.

As per the data, EPFO added 15.29 lakh net subscribers during January 2022, an increase of only 2.69 lakh compared to December 2021. However, among the 15.29 lakh net subscribers only around 8.64 lakh new members have been registered under the social security ambit of EPF and Miscellaneous Provisions Act 1952 for the first time. If we compare it with the entire labour force participation in the country which have been hovering around 400 million for quite some time with about 90 per cent of them are employed in informal sector, the process of formalization can certainly be said to be too slow. It means even the employed persons will have to wait for years to come for such a social security cover.

As for volatility of the labour market is concern, it is evident from the data that even from the formal sector employment approximately 6.65 lak net subscribers exited from the EPFO, but were considered to be rejoined on the basis that they instead of opting out for final withdrawal of their deposits they continued their membership with EPFO. That is the system of government’s counting, which needs to be understood rather allowing the government to conceals the very volatility the formal labour market is plagued with.

The payroll data also indicate the declining trend in the number of members exited from the EPFO membership since July, 2021, just after the second wave of the COVID-19 was receding. There is thus a hope in for the future and exit from the membership may further reduce. However, the number is still high that reminds us about the volatility that is far from over even after the third wave of the pandemic is over.

The provisional estimate of net payroll still gives a dismal picture, which is an indication of dismal performance of the Modi Government. The number in January 2022 was just 15.29 lakh, still lower than 15.52 lakh during September 17-18. It peaked to 78.58 lakh in 2019-20, fell to 77.08 next year. The worse came in April 2021 with 7.27 lakh and the worst next month in May with 4.68 lakh net addition. Then the number again started increasing and by September 2021, it reached 12.03 lakh only to slip sharply again to 9.33 lakh in October 2021. It has been steadily increasing since, but the pace is too slow, and at this pace we cannot cover entire employed workforce (around 400 million) under the social security system of the EPFO even in decades.

Age-wise comparison of payroll data shows that the age-group of 18-25 years has registered the highest number of net enrolments with 6.90 lakh additions during January 2022, which is around 45.11% of total net subscribers addition during the month. This is followed by the age-group of 29-35 years with an addition of around 3.23 lakh net enrolments. It certainly indicates that many first-time job seekers are joining organised sector workforce, but the number is still low.

State-wise comparison of payroll figures highlights that the establishments covered in the states of Maharashtra, Haryana, Gujarat, Tamil Nadu and Karnataka are in lead by adding approximately 9.33 lakh subscribers during the month, which is around 61% of total net payroll addition across all age groups. It shows the availability of formal jobs for all the other states combined is just 39 per cent. Modi government must therefore plan for availability of the formal jobs spread evenly in all states of the country not only concentrated only in five states.

Gender-wise analysis indicates that net female payroll addition during the month is approximately 3.20 lakh. Share of female enrolment is approximately 21% of the total net subscribers addition during the month of January, 2022 with an increase of 57,722 net enrolments over the previous month of December, 2021. It is too wide a gender gap in the formal workforce in the country.

Industry-wise payroll data indicates that ‘expert services’ category (consisting of manpower agencies, private security agencies and small contractors etc.) constitutes 39.95% of total subscriber addition during the month. In addition, growing trend in net payroll additions has been noted in industries like Expert Services, Engineering Contractors, Trading (Commercial Establishments) and Building & Construction industry etc. The data clearly revealed the increase higher skills based jobs in the formal sector. Modi government should therefore need to take care of non-skilled workforce and make provisions for them that they should also get formal jobs with social security and retirement benefit schemes such as the EPFO, and are not left out.

It should also be noted that the labour participation rate in January 2022 had come down to 39.9 per cent from 40.9 per cent in December 2021 and 43.3 per cent in January 2019. The month also witnessed the employment shrinking 39 lakh within a month. The unemployment rate had also remained high at 6.6 per cent with 66 lakh frustrated employed just left the job market because there were none. It is in this backdrop, one should read the EPFO data, which obviously need overhauling to widen its scope and ambit to cover entire workforce in the formal sector and speeding up formalization of informal workforce so that they can also get the retirement benefits and pension under this scheme. (IPA Service)