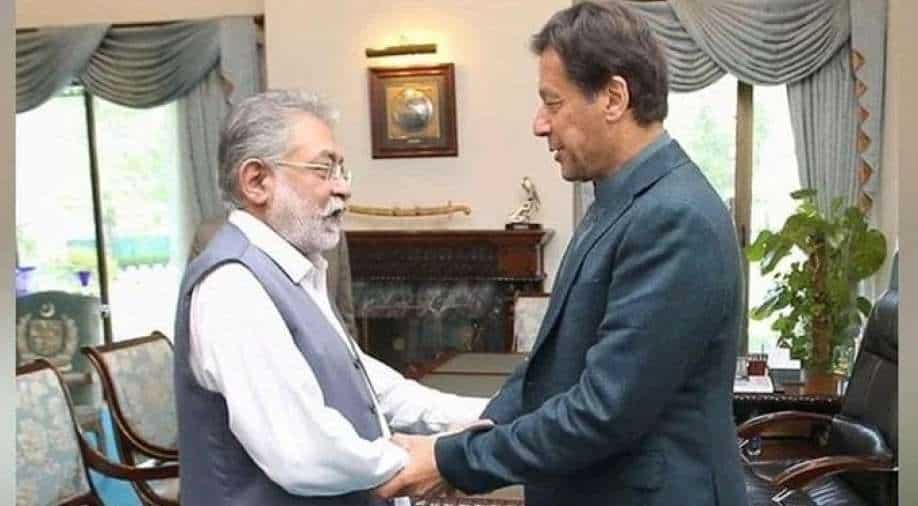 The more the Prime Minister of Pakistan Imran Khan Niazi zooms in on 25 March (if not earlier),the fateful voting for no-confidence motion at the National Assembly, the more rattled is the hierarchical order of the main ruling party, Pakistan Tehreek-i- Insaf, headed by the PM. As if sensing that his prime ministerial existence is threatened, Imran Khan seems to have forgotten that once he was committed to play with a straight bat when he led the Pakistan Test cricket team and now swinging with a cross bat to stay on.

With some 20 members defecting to the opposition, Pakistan PM Imran Khan’s ruling PTI , the future of federal  government has entered a zone of uncertainty. The PTI strength being reduced to 155 MNAs in the PTI kitty, political analysts in Pakistan too sense uncertainty of PTI’s continuance in future, especially with King Khan at the helm. In contrast, the opposition comprising the PML(N) and smaller allies  are  assured support of  from over  more than 160 MNAs.

King Khan’s discomfiture is due to miltablishment’s reported move to ask the former  cricketer to step down, although the PM is a pet of Pak army top brass. General Qamar Javed Bajwa, has sounded Imran Khan to step down after  the ensuing  conference of the Organization of the Islamic Cooperation in Islamabad  this month. Fresh grist to the mill of political cauldron is the suggestion to the premier from one of the founders of PTI and an MNA Najeeb Haroon, a doyen among Pakistan’s civil engineers, who feels that the PM’s quit gesture will ease  current political turmoil. “The country can no longer sustain instability and PM Imran Khan must shed his stubbornness and somebody else from within the party be brought forward as the prime ministerial candidate,” he told a leading TV news channel of Pakistan.

Whether Imran Khan will gracefully step down is to be awaited. There is, however, no sign of his willingness to give up the schism inside the PTI. Which is why he keeps lambasting the Opposition which tabled the no-confidence motion. He branded the Pakistan Peoples Party co-chairperson Asif Ali Zardari, Pakistan Muslim League (Nawaz) president Shehbaz Sharif and Jamiat Ulema-e Islam (Fazlul)  Pakistan chief Maulana Fazlur Rehman as “three stooges” from the opposition , accusing them of “stealing” for years and facing corruption cases.

“The judiciary, Election Commission of Pakistan and the nation are observing the situation. The veil has been lifted from the eyes of the nation… opposition leaders would “badly lose this match” , he added. But King Khan is irrepressible. Spearheading the Opposition, he stated that people would not trust them.”Your children will be unable to find spouses and they will be ridiculed at school. You are destroying the future of your children by accepting this money.”

However, dissidence inside the PTI is raging. Dissident lawmakers of PTI  are coming out into  the open. Unnerved PTI party bureaucrats resort to vitriolic language to shame them. Education Minister of Punjab Dr Murad Raas wrote on Twitter “Sindh House has been turned into a Political Brothel. Political prostitutes are running in and out of this Brothel. Head Pimp – Asif Ali Bemareee. ”Strangely enough, the .throwing away of political etiquette in Pakistan’s parliamentary polity wasn’t kick started by Dr Raas. It was initiated by an Imran-adherent Aalia Hamza, PTI’s MNA and parliamentary secretary for commerce, industries and production. She abused PTI dissenters as ‘worse than prostitutes.’ She added. Sindh House was operating ‘like a brothel…. ‘pimps are sitting there.’

‘Imranocracy’ has been brewing for nearly two years. The first expression of anger had burst out through the petition en masse from women journalists in 2020 when they also called on the PTI government to act against trolls associated with the ruling party who indulged in abusive campaigns, sometimes even resorting to threats of murder and sexual violence. There was no positive response from the government. On the contrary, abusive campaigns were aggravated. Signatories were witch-hunted. Pity was that the PTI bureaucracy inspired the attackers against the journalists who were critical of PTI governance.

The premier had smelt a rat in even end-January this year and had lost his cool in a TV programme Aap Ka Wazir-e-Azam, Aap Kay Saath, he awkwardly warned his opponents in and out of PTI. In case, he would be out of power, he would make their life hell. “You will not find a place to hide if I took to the streets…I will just need to nudge people and others will be running to London as well to join the ones who already are there’ he quipped.

The dramatic turn against Imran Khan took place a week ago when a dozen of MNAs expressed their lack of confidence in him. The miltablishment that pushed the PTI supremo off the grace, is half inside and other half in the wings – a sign of quit notice to King Khan. It was evident when the

Pakistan Army spokesperson told the media last week that the military would remain neutral. A visibly angry Khan retorted at a rally in Khyber-Pakhtunkhwa:: humans take sides and “only animals are neutral”. The Army ignored Khan’s barb. (IPA Service)