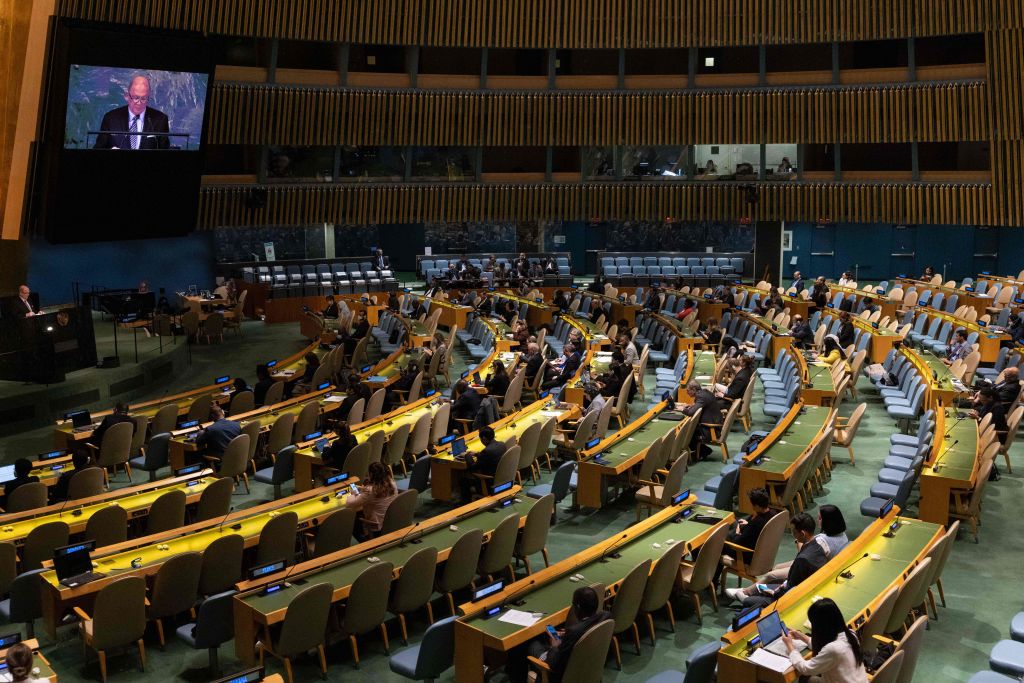 Immoral, illegal, archaic, coercive, intimidating, criminal, absurd, reckless, brutal — even genocidal. These were some of the adjectives used by global leaders at the United Nations as they took to the podium at the United Nations General Assembly to rail against US policy toward Cuba. Then yesterday, November 3, for the thirtieth year, the General Assembly voted nearly unanimously — 185–2 — to support a resolution presented by Cuba calling for an end to the US embargo (also known as the blockade).

As was the case last year, this year, the only two countries supporting the embargo were the United States and Israel, a state that is beholden to the United States for the $3.8 billion it receives every year in military and arms spending to continue its fierce repression of Palestinians. The annual condemnation of the United States’ unilateral coercive measures against Cuba shows how out of touch the United States remains in the face of an international commitment to eliminate its economic warfare policies against countries that pose no military or nuclear threat.

It is hard to get such overwhelming agreement at the United Nations about anything, especially for resolutions that condemn the US government. The United States is normally able to use a carrot-and-stick approach to get significant support for its positions, particularly from small countries beholden to US foreign aid. But in the case of Cuba, US strong-arming doesn’t work.

Even steadfast allies like Canada, the United Kingdom, Australia, and Japan vote against the United States when it comes to the longest-standing comprehensive sanctions regime that has existed. The United States has acknowledged that the embargo is difficult to sustain because of lack of cooperation and agreement by other countries, which continue to openly challenge its legitimacy.

In support of the UN resolution, Colombia said that Cuba has served as a guarantor of peace talks between armed groups and the Colombian government for forty years, noting that the United States has chosen to ignore this record when it ironically and cruelly placed Cuba on the state sponsors of terrorism list — precisely because of Cuba’s role in brokering peace talks in Colombia.

Cambodia stated that the embargo prevents Cuba from being able to implement the 2030 Agenda for Sustainable Development goals, adopted by all UN member states (the UN estimates the embargo has cost Cuba at least $130 billion, or $15 million a day). Kenya called the embargo inhumane. Vietnam denounced the embargo as a violation of the UN Charter and the principle of self-determination. The Philippines expressed concern about the increasing extraterritorial reach of the embargo.

Mexico condemned the cruelty of intensifying the embargo throughout the pandemic and called out unilateral sanctions as illegal, especially when their goal is to push for political changes in an otherwise sovereign nation. The representative from Eritrea said opposing the embargo was not a question of sympathies or ideologies, but a matter of defending justice, international law, and the elementary sense of humanity: “To oppose the blockade is to act on behalf of the hundreds of thousands of families who are victims of a logic of domination that is inconsiderable in the twenty-first century.”

Country after country spoke against the particularly harmful effect of US policy during a global pandemic and recession, and how the extraterritorial reach of the embargo affects nations around the world whose populations are restricted, punished, and limited by it.

The US embargo — which consists of a number of laws passed over the years designed to eliminate all economic, political, social, and cultural ties and relations between the two countries — has been codified into law by Congress. But administrations have varying degrees of leeway in how they interpret, enforce, and enact these laws.

President Barack Obama loosened restrictions and sought a path toward diplomacy, while Trump eliminated these openings, undoing all the gains made by Obama. President Joe Biden, despite campaigning on a message much more aligned with Obama’s administration, has instead adopted Trump’s policies. The tightening of sanctions by Trump — including throughout the COVID-19 pandemic — remain current Biden policy. Biden’s messaging and justification for these measures mirror Cold War administrations and sound more like McCarthyism than a candidate who campaigned on diplomacy.

The severe economic, energy, and humanitarian crisis Cuba is facing today has its roots in US policy and the intensification of the embargo. The embargo’s explicit policy goal is to bring poverty, hunger, and devastation to the Cuban people, and the US admits that it is doing just that — even as it justifies the embargo’s continued existence as a response to the hunger and poverty in Cuba.

President Biden has called Cuba a “failed state.” Yet any nation that spends hundreds of millions of dollars to cause hunger and poverty in another sovereign nation, holding that state hostage until it cries “uncle” and surrenders, must have its own legitimacy questioned. Those are antics of torture, not foreign policy.

Given the embargo’s cruel rationale and impact, human rights organizations have long condemned the United States’ ongoing enforcement of it as a violation of the Cuban people’s human rights. The embargo severely limits the Cuban government from accessing the materials, resources, financing, food, medical equipment, and supplies it needs to ensure the well-being of its people.

The embargo is a policy of economic punishment and isolation against an entire people based on ideological differences in how people should elect their own governments and how those elected should govern. That kind of sanctions regime has been deemed collective punishment and illegal under international law, particularly when provoking political change is the objective. In addition, these unilateral coercive measures violate the UN Charter itself and the principles that hold up the UN system, including sovereignty, multilateral cooperation, and self-determination.

With Latin America undergoing a massive shift by electing progressive governments to power in most countries in the region — thereby rejecting the isolationist and neoliberal policies of their predecessors — there is significantly reduced tolerance toward a sixty-year-old failed US policy of trying to overturn the Cuban government. This year’s Summit of the Americas, which was hosted by the United States, was a political disaster, in large measure because of Biden’s insistence on excluding Cuba, Venezuela, and Nicaragua from the meeting. The region continues to reject policies of isolation, especially of its own.

Just this week, eighteen former leaders and heads of state from the Americas — including former presidents of Brazil, Colombia, and Bolivia — sent a letter to President Biden asking him to recognize the enormous difficulties Cuba is facing, including the devastation from Hurricane Ian, and move from a policy of embargo to one that respects the public aspiration to make Latin America and the Caribbean a zone of peace.

In speech after speech, world leaders expressed their exasperation at having to condemn this policy year after year, with no acceptable US response. The representative of Equatorial Guinea challenged the United States to live up to its self-image: “If the United States is the bastion of democracy, then it must listen to the assembly’s overwhelming voices, which have unanimously and repeatedly called for the lifting of the embargo.” The Jamaican representative expressed the global tiredness at delivering this annual message to the United States, saying, “Let’s hope that this is the last time we have to debate this issue.” (IPA Service)