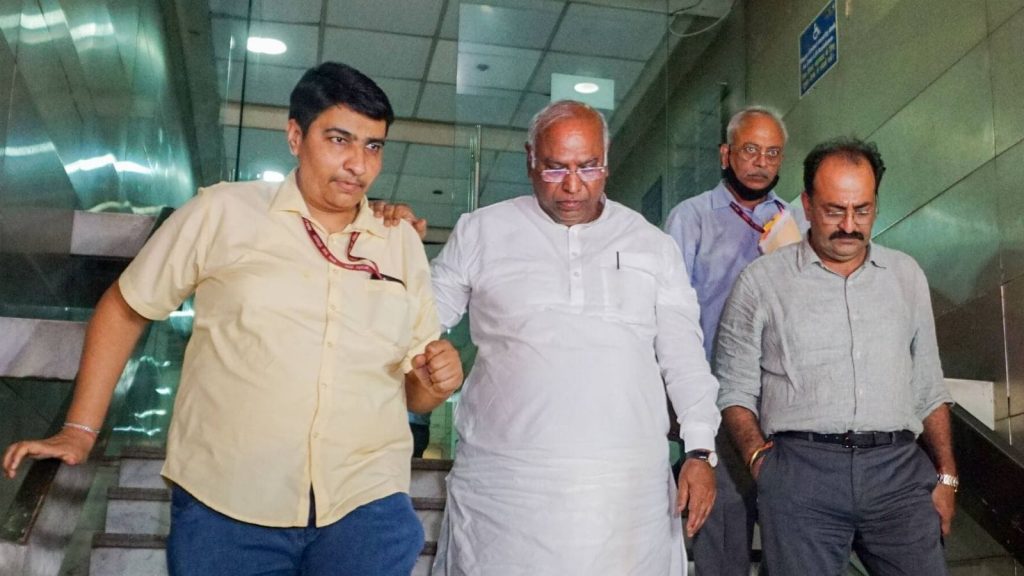 The Enforcement Directorate (ED) on Thursday searched the office of Congress-owned Young Indian in Delhi as part of the ongoing probe in the National Herald case. The searches, which lasted for more than six hours, were conducted in the presence of senior party leader Mallikarjun Kharge at the Herald House building. The grand old party slammed the summons issued to Kharge right in the middle of the Parliament session.

The 80-year-old Kharge, who is the principal officer of the company, reached the Young Indian office at around 12:40 pm and met ED officials who had sought his attendance during the searches. He was also quizzed by the probe agency.

The appearance of Kharge before the officials of ED and its action in the money laundering case led to a political slugfest between the Congress and the BJP in Parliament after Kharge told the Rajya Sabha that he was summoned to appear before the probe agency at 12.30 pm.

“It’s been 6.5 hours and our senior leader and LoP Mallikarjun Kharge, who was summoned by ED in the middle of (the Parliament) session, is still with the ED. It is regretful. He was supposed to host a dinner at 7:30 pm for the Opposition’s vice-presidential candidate Margaret Alva. This is pure harassment. The Modi government has created this drama before Congress’s protest rally tomorrow in all states against inflation, unemployment, and GST on edibles. Many security forces were deployed yesterday outside Sonia Gandhi’s residence and AICC’s HQs,” said Congress general secretary Jairam Ramesh.

#WATCH| It’s been 6.5hrs & our senior leader & LoP Mallikarjun Kharge, who was summoned by ED in the middle of (Parliament) session, is still with ED. It’s regretful; he was supposed to host a dinner at 7:30pm for Opposition’s VP candidate Margaret Alva: Congress MP Jairam Ramesh pic.twitter.com/IAd7CXqGtV

Reacting on summons issued to him, Kharge said in the Upper House of Parliament that this was an attempt to “frighten and intimidate” the Congress and wondered if democracy would remain alive. Supporting him, his party said the summons during the working hours of Parliament was a “black chapter of democracy” and an “insult” to the legislature.

Launching a scathing attack on Prime Minister Narendra Modi, Congress leader Rahul Gandhi said he is “not afraid of Narendra Modi” and will not be “intimidated” by the ED action in the National Herald case.

Meanwhile, Union minister Piyush Goyal, who is the Leader of the House in the Rajya Sabha, termed Kharge’s charge “baseless” and maintained that the Centre does not interfere in the functioning of law enforcement agencies. He asked the Congress leaders to face the law “instead of running away”.