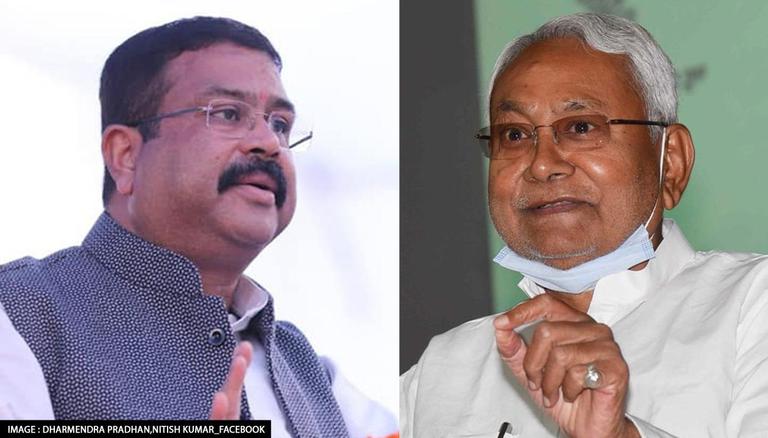 Senior BJP functionary and union education minister Dharmendra Pradhan met Bihar Chief Minister Nitish Kumar in Patna on Tuesday. According to sources in the BJP, the meeting is being deemed important in the context of the upcoming Presidential polls. Moreover, in the wake of the battle of words between the ruling JD(U) and ally BJP lately and massive protests in Bihar over the recently announced Agnipath scheme, Pradhan’s announcement after the meeting, that Nitish would remain the chief minister of Bihar till 2025, is being considered significant. The former Bihar BJP in-charge, Pradhan, indicated that the discussions with CM Nitish Kumar were centred around the ensuing presidential polls.”We have fielded a tribal lady, who has a distinguished track record as a former minister in Odisha and as Jharkhand governor. We are glad that the entire NDA stood united when she filed her nomination papers,” Pradhan added. The buzz is that Nitish had expressed his apprehension at Bihar BJP leaders criticising JD(U) and Pradhan in turn had reportedly delivered this to the state BJP leaders.

CONGRESS DISTANCES ITSELF FROM MANISH TERWARI ON AGNIPATH

The Congress has distanced itself from Manish Tewari, the party’s Lok Sabha MP from Sri Anandpur Sahib in Punjab, over his article in a prominent English-language newspaper that pitched the central government’s ‘Agnipath’ recruitment scheme as a part of defence sector reforms, a stance that is in direct contradiction to the party’s official line of opposing the initiative. On Wednesday, the Congress party’s communication head Jairam Ramesh took to Twitter to oppose Tewari’s stand, and said: “Manish Tewari, INC MP, has written an article on Agnipath. While @INCIndia is the only democratic party, it must be said his views are entirely his own & not of the party, which firmly believes Agnipath is anti-national security & anti-youth, bulldozed through without discussion.”Tewari, however, quickly pointed out that on Twitter: “The tag line of the article does say – The views are personal. I wish @Jairam_Ramesh ji would have read it right till the very end.”The Agnipath scheme envisions recruiting soldiers between 17.5 and 21 for a period of four years, at the end of which only 25 per cent of each batch will be retained for regular service. For 2022, the upper age limit has been extended to 23 years. The policy, announced in June, was met with widespread agitation across India, many of which turned violent, led by armed forces aspirants now deprived of a long-term career option. The Congress had also observed a peaceful satyagraha at Jantar Mantar in New Delhi and also in various states on the issue on June 20.Congress MPs had taken out a peaceful march from Parliament against Agnipath and a delegation of senior leaders submitted a memorandum to President Ram Nath Kovind requesting him to withdraw the controversial scheme.

In the wake of Western Uttar Pradesh recently witnessing extensive protests against the Centre’s new soldier recruitment scheme Agnipath, the Rashtriya Lok Dal (RLD) has launched a series of yuva panchayat in the region to engage with the youth. RLD chief and Rajya Sabha MP Jayant Chaudhary addressed the first such gathering in Shamli on Tuesday, and said, “By introducing Agnipath, they are seeking revenge for the farmers’ agitation in UP, Haryana, and Punjab. Now they are filing FIRs against the youth. This is the beginning. Next in line will be police recruitment.”Jayant added that Agnipath would “take away the security and prestige attached to an Army job.” RLD insiders say 11 such yuva panchayats will take place till July 16 in different cities of Uttar Pradesh with the sole aim to activate its cadre to back the counter movement, a strategy it wants to replicate in mounting pressure on the government to withdraw Agnipath.

Recently held Lok Sabha by-election results, with BJP conquering two of Samajwadi Party’s strongholds in Rampur and Azamgarh, have surprised observers. In the Azamgarh by-polls, BJP candidate Dinesh Lal Yadav aka ‘Nirahua’ defeated Samajwadi Party’s candidate Dharmendra Yadav by a margin of 8,679 votes. It’s crucial to note that the BSP candidate, who came third, polled over two lakh votes eating into the SP vote share. The BSP has not been contesting by-elections as a protocol in terms of policy and what made party supremo Mayawati to field a candidate, needs to be looked into. In Rampur, BJP candidate Ghanshyam Lodhi won with a margin of over 40,000 votes. Political observers claim that Azam Khan has played an important role in the outcome of the poll. Addressing a press conference in Lucknow, Chief Minister Yogi Adityanath described it as “the double victory of the double-engine government of the BJP.” The victory in the “challenging battles”, he said, has a “far-reaching message for the 2024 Lok Sabha polls.” Meanwhile, SP spokesperson Abdul Hafeez Gandhi charged the BJP for misusing the machinery. “Also, during the by-polls, the electorate usually votes for the ruling party. There are still two years left for the next Lok Sabha polls and perhaps people don’t want to antagonise this vindictive government,” he said. The BJP’s victory in Rampur and Azamgarh, considered difficult seats for the party, is significant as these were earlier held by Samajwadi Party stalwart Azam Khan and its president Akhilesh Yadav, both of whom resigned after being elected to the state assembly.

Trinamool Congress chief Mamata Banerjee calling for jihad against BJP in a public speech on Tuesday has enraged the opposing Bharatiya Janata Party leaders. Banerjee said that July 21 is the Martyrs Remembrance Day, and it would also be the day to declare jihad against the BJP. The Trinamool Congress commemorates July 21 as a day of martyrs. It was this day back in the year 1993 some 13 Congress youth workers died in a police firing during a protest march led by Banerjee. The West Bengal Chief Minister was a part of the Indian National Congress then. While inviting everyone to participate this year on July 21 for the gathering, she added that the day wasn’t marked by the party for two years due to pandemic-related restrictions, but she wanted a massive participation this year. Meanwhile, West Bengal Governor Jagdeep Dhankhar on Wednesday asked CM Banerjee to withdraw her alleged comment declaring that the Trinamool Congress will observe 21 July as ‘a day of jihad against the BJP’. Taking to Twitter, Governor Dhankhar said, “The statement has no place in a society governed by rule of law, and least expected from one under constitutional oath to abode by it. Taking strong exception to this, have written to CM to withdraw the statement and respond.” In another tweet, he said that “declaring “Jihad” against a political party is constitutional anarchy and decimation of democracy that cannot be countenanced. Am sure wiser counsel will prevail & Hon’ble CM would regretfully withdraw the statement earliest. Such a pernicious stance is antithetical to democracy.” The governor wrote the letter after a BJP delegation, led by Leader of Opposition Suvendu Adhikari called on him to seek constitutional intervention for her statement allegedly made at a programme in Asansol on Tuesday. There has been no word from the chief minister’s office. But Mamata Banerjee’s party, Trinamool Congress, has responded.TMC spokesperson Jay Prakash Majumdar said that the most common interpretation of jihad is protest and that is what Banerjee meant. (IPA Service)