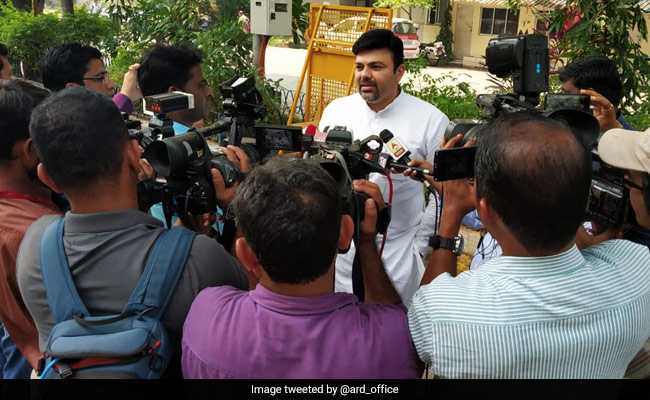 Alleging “imposition” of an outsider in the state, Maharashtra Congress leader Ashish Deshmukh today wrote to Congress president Sonia Gandhi announcing his resignation from the post of General Secretary of the Maharashtra Pradesh Congress Committee. Calling it an injustice on Congress workers, Deshmukh objected to Uttar Pradesh leader Imran Pratapgarhi being named the party’s pick from Maharashtra. Another senior Congress leader from the state, Nagma, had yesterday expressed disappointment on Mr Pratapgarhi being chosen for the upper house.

“Imposing an outside candidate will not benefit the party in terms of growth. This is injustice towards general Congress workers in Maharashtra,” he said, adding that he will continue to work with the Congress party “as a loyal Congress worker” and fulfil his commitments.

The Congress list of Rajya Sabha candidates that was released yesterday, causing massive resentment in the ranks, named 34-year-old Imran Pratapgarhi, the Congress minority department chairperson and a poet, a candidate from Maharashtra.

In 2019, Pratapgarhi had contested the Lok Sabha election from Moradabad on a Congress ticket but lost his to the BJP candidate.

Deshmukh has argued that fielding a local leader would have strengthened the party but the leadership has chosen to bring in a political lightweight from another state instead.

Pawan Kheda, who is from Rajasthan and was widely seen as a shoo-in from the Congress, was not on the Rajya Sabha list. “Maybe there is something missing in my penance,” he tweeted yesterday morning.

Responding to his tweet, Congress leader Nagma expressed her disappointment at Mr Pratapgarhi being considered over her. She wrote, “Our 18 years of penance also fell short in front of Imran Bhai.”

She also posted: “Sonia Ji, our Congress president, had personally committed to accommodating me in Rajya Sabha in 2003/04. When I joined the Congress party on her behest we weren’t in power then. Since then, it’s been 18 years, they didn’t find an opportunity. Mr Imran is accommodated in RS from Maha. I ask, am I less deserving?”

SoniaJi our Congress president had personally committed to accommodating me in RS in 2003/04 whn I joined Congressparty on her behest we weren’t in power thn.Since then it’s been 18Yrs they dint find an opportunity Mr Imran is accommodated in RS frm Maha I ask am I less deserving

Sources close to the G-23 or Group of 23 “dissenters” in the Congress have also raised many questions about the choice of candidates for the upper house of parliament. The party has chosen “outsiders” in Rajasthan and Chhattisgarh as well, the two states where it is in power.