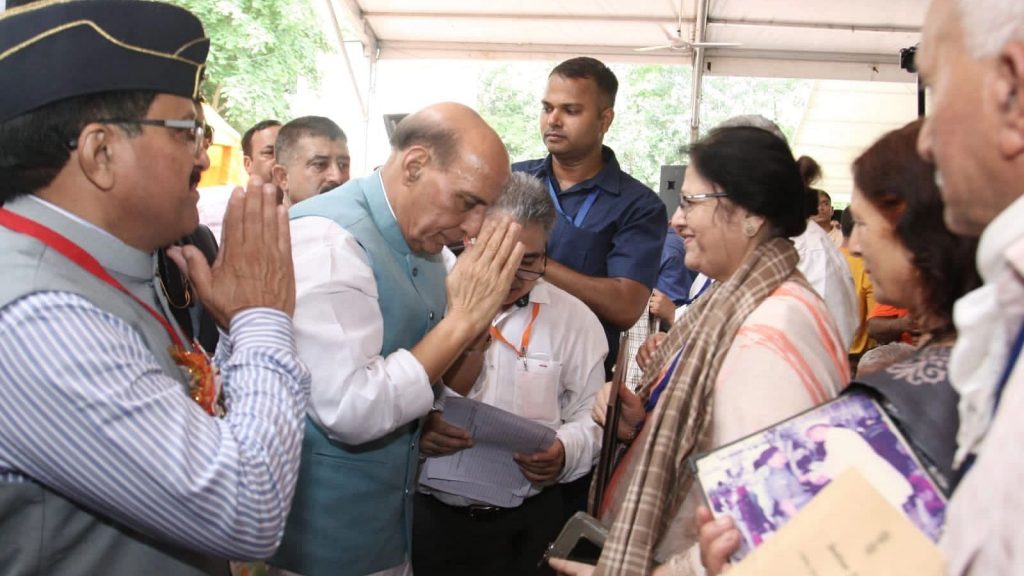 Raksha Mantri Rajnath Singh on Kargil Divas reiterated that Pakistan Occupied Kashmir (POK) will be returned to India, and that POK remains an integral part of India. We’ve heard this before, umpteen number of times, more and more after the Bharatiya Janata Party came to rule at the Centre. Prime Minister Narendra Modi in one of his Independence Day speeches during his first term, spoke of getting back not only POK, but also freedom for ‘Balochistan’.

The Balochs have been waiting.  And so have Indians, across the country. But POK remains Pak territory, and China cuts through POK and Gilgit-Baltistan with CPEC. Ministers in the Modi government do get the POK sickness oftentimes, usually whenever they’re at or near the Line of Control, which demarcates and separates POK from India-administered Kashmir.

The Pakistanis call POK Azad Kashmir, and talk of Kashmiris living in POK in the third person, giving the impression to all and sundry who cared to listen that Azad Kashmir is an “azad” country under the protection of the benign Pakistanis. For 75 years, POK’s Kashmiris have been led to believe that the wolves are all living on this side of the LoC.

Defence Minister Rajnath usually limits himself to “kadi nindha”, whenever he feels too agitated about an issue that touches India’s interests. And he doesn’t usually walk into controversies. But POK doesn’t need an explanation. For far too long, Indians have been fed the crap that POK is India’s territory! If so, what’s it doing in the enemy hand?

On November 1, 2019, Congress leader Kapil Sibal showed the mirror to the Modi government, stating that “mere talk” will not get back POK to India, asking if the Modi government had a “plan” with “concrete steps” to take back POK. Also reminding Modi and the Raksha Mantri that making statements alone wouldn’t work. “When are we getting POK is important, how is the Prime Minister going to get it, he must tell us all about it.”

Kapil Sibal might as well have saved his breath. November 1, 2019, when he spoke, there wasn’t an election in the offing. The Modi dispensation usually raises “nationalism” only when there are elections in some or the other part of India.

Kashmir, POK, Pakistan and elections go hand in hand. And, ever since the change in government in 2014, China has been added to the menu card. Diverting attention to POK when the PLA intrudes is a pattern that has worked for the BJP, and the Modi regime time and again. And nowadays the murmurs are loud of the Chinese PLA building infra, an entire village, “inside India”.

And it doesn’t have to be heavyweight cabinet ministers with plum portfolios to raise POK. Even an MoS will do. In January this year MoS Panchayati Raj Kapil Patil told a rally in Bhiwandi, Thane, to get out of the “mindset of onions and potatoes”.

“Modi hadn’t become PM to bring down the prices of onions and potatoes… Something will happen by 2024. POK will get integrated into India. Should not be a problem in hoping that. Only Prime Minister Narendra Modi can do all these things,” Patil told the crowd.

Could be he was repeating what must have been discussed in cabinet meetings. Let’s not forget the juggernaut of Modi & Shah live, dream and act elections. The fact that the two cannot do much about elections in some or the other part of India calls for tactical shifts like diverting attention to issues like POK which are emotive.

Hand the tricolour and a couple of nationalistic slogans like the “Harghartiranga” one, and it pays in spades. Among the Union ministers who never tire of “bringing back POK” is the ever reliable Dr. Jitender Singh who also happens to be from Jammu. Every year, Dr. Singh brings alive POK, and then kills it for its next birth the next year.

Knowing that the Prime Minister will not bring up POK, not as long as the “vishwaguru” adrenaline pumps in his veins, it becomes the duty of Raksha Mantri Rajnath Singh to come clean on POK. Children throughout India are being brainwashed with the lie that POK is an integral part of India.

The map of India that school children are taught from is a falsehood perpetrated on impressionable minds. It’s time Prime Minister Narendra Modi got out of his election mindset. Even his staid, serious and diplomatic EAM S. Jaishankar has said that POK is part and parcel of India, and that “one day we’ll get physical jurisdiction”. But like Kapil Sibal asked, “When, does Modi have a concrete plan?” (IPA Service)