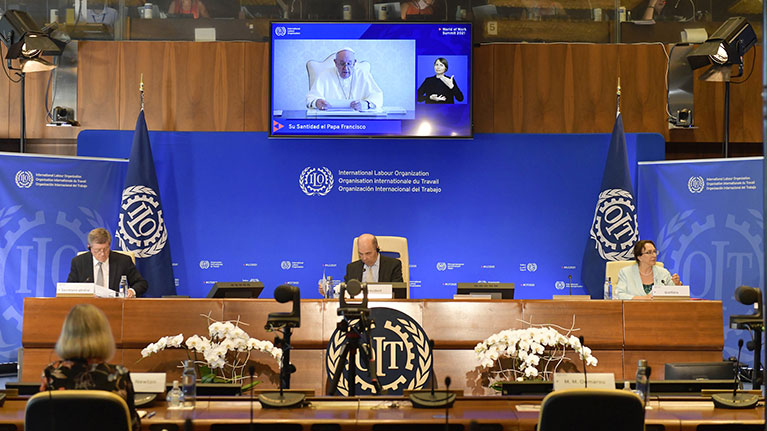 Prime Minister Narendra Modi led ruling establishment have earned a “censure” for India during just concluded 17th Asia and Pacific Regional Meeting (APRM) organized by International Labour Organization (ILO) at Singapore. It was held during 6-9 December 2022 to discuss and devise ways and means to bolster efforts to achieve social justice and decent work for all, the areas in which Modi government’s performance have been all along deplorable during the last 8 years of their rule.

The meeting had brought 388 delegates – including 22 ministers and vice-ministers – representing governments and workers’ and employers’ organization from 35 countries in Asia, the Pacific and Arab States region, but unfortunately there was no representative from 10 Central Trade Unions from India.

It may not be out of place to mention here hat Modi government has been ignoring the principle of tripartite approach in matter of workforce in India. Indian Labour Conference (ILC) is legally the highest tripartite body of the country for issues related to workforce. However, government has not organized any ILC meeting since 2015, and has denied to have a national employment policy for the country as recommended by the ILC in 2013. The Union Government got even four controversial labour codes passed in the parliament of India without consulting the ILC or the CTUs in 2019 and 2020. The labour codes were termed by the government as the much needed biggest labour reform in the country, which the joint platform of 10 CTUs call anti-labour and pro-corporate and fear their implementation would bring modern day slavery. Ever since the codes were passed, CTUs are agitating against them and even resorted to all India strike actions.

It is not a secret that Modi government do not like the CTUs. Union Government did not even invite the CTUs to participate in the Singapore Meet of the ILO, in spite of the CTUs’ request letters to the Union Minister of Labour and Employment to include them in the India delegation. Union Minister of Finance have invited them for pre-budget consultation on November 28 for the Budget 2023-24, but gave only “3 minutes of real time” to every CTU to voice their concerns or give suggestions. CTUs, finding this attitude deplorable, had boycotted the meeting.

The entire episode of the Modi government not inviting the CTUs for the ILO meet has been understood by all national and international stakeholders only in this backdrop of strained relationship between the Union Government and the CTUs. When the government ignored the 10 CTUs, they raised objection with the ILO on such a mistreatment by the ruling establishment of India that favours only BMS a member of the RSS-BJP family.

The Credentials Committee in its report said that the Committee received an objection from ten Indian trade unions (AICCTU, AITUC, AIUTUC,CITU, HMS, INTUC, LPF, SEWA, TUCC and UTUC), alleging that the Government had not invited them to the Meeting and had not facilitated their participation therein. The ten trade unions further indicated that despite their repeated solicitations, the Government facilitated the participation of only one union – Bhartiya Mazdoor Sangh (BMS) – that was close to it.

In a written communication addressed to the Committee at its request, the Government explained that the BMS was the largest trade union in the country, with the highest verified representation of all recognized trade unions. Therefore, in accordance with article 1(5) of the Rules of Regional Meetings, and in the spirit of giving voice to more workers, it nominated the Workers’ delegate and adviser from the BMS. The Government further stated that the invitation to the Meeting had only specified one Employers’ delegate and one Worker’s delegate. Had there been scope for more participants to be nominated, it would have been in a position to consider others as well.

In this regard, the Committee noted that article 1(5) of the Rules of Regional Meetings specifically foresees that several most representative organizations may exist in a given country. The Committee further recalls that according to the Advisory Opinion No. 1 of 1922 of the Permanent Court of International Justice (PCIJ) and subsequent case law of the Credentials Committee of the International Labour Conference, where several most representative organizations exist in one country, the Government must, pursuant to the terms of article 3(5) of the ILO Constitution, which contains a similar obligation as regards nomination of non-Governmental delegates to the Conference, aim to effect an agreement among them.

The Committee has also rejected the claim of the government of India that there was no further scope of increasing number of participation and recalled that Employers’ and Workers’ delegates represent, respectively, all the employers and all the workers in a country, and not just their respective organizations. Consequently, where several representative organizations exist, Governments must take them all into consideration and, ideally, proceed to the nomination of the non-Governmental delegates and advisers by common agreement.

Moreover, the Credentials Committee notes that governments were specifically requested to share the invitation letter to the Meeting with the employers’ and workers’ organizations with a view to constituting a tripartite delegation to the 17th APRM and that no limitation was imposed on the number of representatives that could be nominated.

17th APRM concluded with delegates endorsing Singapore Statement that urges governments and social partners to ensure labour protection for all through the promotion of freedom of association and the effective recognition of the right to collective bargaining among others. (IPA Service)