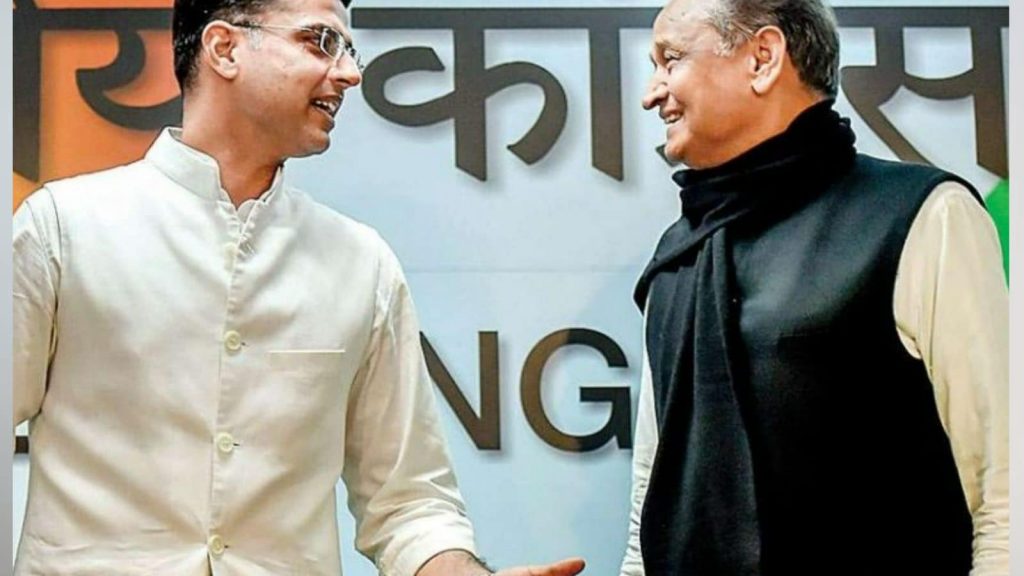 Rajasthan Chief Minister Ashok Gehlot on Thursday stirred up a row with his former deputy Sachin Pilot again, calling him a “gaddar” (traitor) who cannot replace him as he had revolted against the Congress in 2020 and tried to topple his government.

The remark drew a sharp response from Pilot who said that it was unbecoming of Gehlot to make such “baseless” allegations, and that it was not the time for “mudslinging”.

Gehlot’s comment came as Pilot’s camp is pushing Congress to make him the chief minister. In an interview with NDTV, the CM reiterated his stand on the matter and said the Congress High Command cannot make Sachin Pilot the Chief Minister. “A gaddar (traitor) cannot be Chief Minister…a man who doesn’t have 10 MLAs, who revolted against his own party”.

Alleging that Pilot had conspired with the BJP to topple his government in 2020 and had distributed money in an attempt to buy MLAs, he said the Congress can replace him with any of its 102 MLAs in Rajasthan except Pilot if the top leadership feels that the prospects of the party would improve in next year’s Assembly polls.

“The MLAs will never accept someone who has revolted and has been dubbed as a ‘gaddar’. How can he become the chief minister? How can the MLAs accept such a person as the chief minister? I have proof that Rs 10 crore each were distributed to the MLAs holed up in a Gurugram resort for toppling the Congress government in Rajasthan,” Gehlot said.

Pilot, who on Thursday walked alongside Rahul Gandhi and Priyanka Gandhi Vadra in the Bharat Jodo Yatra in Madhya Pradesh, hit back. “This is not a time for accusation. No one should be this insecure. Under his leadership Congress has lost battle twice. Nothing is permanent in politics, and we should work together to defeat BJP,” he said.

“It does not look good for a senior leader like Ashok ji, who has such a vast experience, to make such baseless allegations. It is not time for such mud-slinging. The effort on our part should be to work together unitedly so that we can have government in Gujarat, where Ashok ji is senior observer, and repeat the Congress government in Rajasthan,” he told news agency ANI.

The AICC stepped in to do some damage control, saying Gehlot’s differences with Pilot would be “resolved” in a manner that strengthens the party.

In a statement, AICC general secretary communications Jairam Ramesh asserted that the focus right now should be on ensuring the success of the ‘Bharat Jodo Yatra’.

“Ashok Gehlot is a senior and experienced political leader. Whatever differences he has expressed with his younger colleague Sachin Pilot will be resolved in a manner that strengthens the Congress party. Right now it is the duty of each and every Congressman and Congresswoman to make the already hugely successful Bharat Jodo Yatra even more impactful in the north Indian states,” Ramesh said.