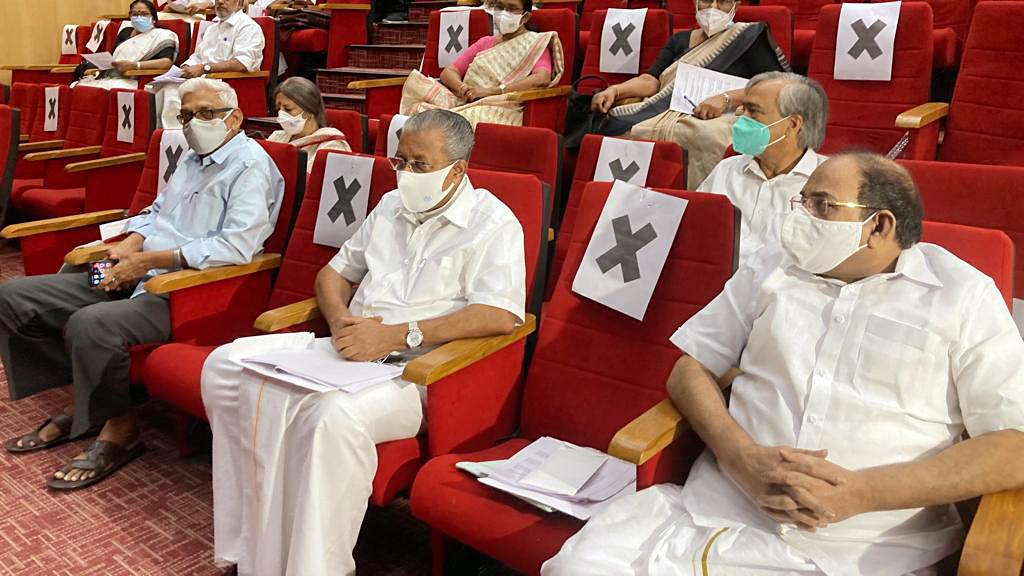 The 23rd Congress of the CPI(M) is taking place in Kerala, which made history for democratically electing a communist government six decades back in 1957. Since then, all through these years, Kerala has remained a unique centre of the left and democratic movement in our country. The pre-eminence that Kerala achieved on this score is based on the innumerable struggles and movements launched by the people, which immensely contributed to the freedom movement and subsequently, during the post-Independence period, for creating an alternative Communists-led model of development, which is people-centric.

Dear Delegates, your Congress is taking place at a critical time, when the country is facing unprecedented attacks from the rightwing forces on the very fundamentals of Indian Republic. However, the future is not bleak as the masses — workers, farmers, women, youth, students and other sections of the working people — are in no mood to take the anti-people and divisive moves lying low. They are out on the streets to safeguard their hard-earned rights.

After the financial meltdown of 2008-09, the rise of rightwing authoritarianism became a global phenomenon as neo-liberal pro-corporate forces captured power in many parts of the world. Those forces are bent upon destroying the progressive, inclusive and scientific achievements of humanity. Fascist forces have already expanded their bases alarmingly in Germany and other European countries, taking advantage of the unrest due to falling living standards, growing unemployment, inflation, etc. We see a steep arms race once again, fuelled largely by the US military industrial complex. The latest in the series of imperialist advances is the attempt by imperialist forces led by the US and NATO to de-stabilize peace and security, at the cost of the lives of both Russians and Ukrainians. In our neighbourhood too, there is massive unrest and instability in Afghanistan, Pakistan, Sri Lanka, Bangladesh, Nepal and Myanmar. It appears that each country is in turmoil for different reasons but the nefarious designs of international finance capital can be traced everywhere. This, of course, is being resisted in many a country, particularly in Latin America.

Dear Comrades, more than seven decades after Independence, poverty and extreme inequality continue to plague our country. The situation has worsened in the last few years. Our country has seen a sharp decline on almost every development indicator, including fundamentals like the Hunger Index. The concentration of wealth at the top of the society is taking alarming proportions while millions suffer in penury and deprivation. The COVID-19 crisis has exposed the unequal nature of the much-trumpeted growth.

The BJP government under Narendra Modi is engaged in subverting the basic values that define our nation. Secularism, democracy, federalism, welfare-state and the independent character of our foreign policy are all being subverted. All institutions like Judiciary, Election Commission and the Parliament are being undermined. Watchdogs of our polity like CBI and ED are being used to intimidate political opponents contrary to their mandate. The BJP-RSS never subscribed to our representative democracy and now they are subverting the constitutional bedrock of our Republic.

The unilateral abrogation of Article 370, bringing the discriminatory CAA, pro-corporate Farm Laws, Labour Codes are examples of the high-handed authoritarian Modi government. The BJP is using their parliamentary majority to undermine the Parliament itself and making it subservient to the whims of the ruling party, snatching its role as the supreme deliberative institution of the nation, which is expected to represent the sovereign will of the people. Whoever questions the government and its policies is being slapped with sedition and the draconian UAPA. Those, who look at the functioning of the government critically, are dubbed as anti-nationals and terrorists with the help of a compliant media. Activists working for marginalized sections and for human rights are being attacked with the might of the state apparatus like in the Bhima-Koregaon controversy.

Rationality, scientific temper and constitutional morality, which are to be the stepping stones of our secular democratic republic, are being dismantled systematically.

Alongside dismantling the foundations of the Republic, the BJP-led Union government is also ruthlessly pursuing the neo-liberal economic policies in the face of stiff resistance in the Parliament and on the streets.

Disastrous impacts of demonetization and GST continue to hurdle any prospect of economic recovery. The public sector, which mitigated the economic disaster of 2008 and made the country self-reliant, is being privatized. Latest are the plans to sell away Railways, LIC and public sector banks. Public sector banks are being looted and cheated with the blessings of the ruling party to the tune of tens of thousands of crores of rupees by a select group of cronies. Economic offenders are being allowed to run away to foreign countries. Unemployment is on a five-decade high and masses are reeling under inflation. Modi government’s pro-corporate policies have benefited a few corporate houses with alarming concentration of wealth and creating unprecedented inequality.  The very names of Adani and Ambani have become synonymous with cronyism.

Religious and caste-based distinctions have flourished under the BJP-RSS regime. The RSS and its affiliates continue to polarize the society on communal lines and create an atmosphere of fear, hatred and divide. In their aggressive move, the RSS-BJP combine is not only taking steps to rewrite history but also to redefine Indian Nation. They claim that they are in the process of building a Hindu Rashtra, which was emphatically rejected by Dr Ambedkar at the time of making the Constitution. The Manuvadi RSS is full of contempt for the idea of Annihilation of Caste as propounded by Dr Ambedkar and continues to represent and perpetuate the ideology of caste hierarchy and discrimination.

Under the leadership and mindset of the RSS, attacks on Dalits and Tribals have increased manifold. Caste atrocities are on increase with impunity. The Left should intensify its struggles mobilising anti-caste forces.

Similarly, the institution of patriarchy is getting strengthened under the same Manuvadi agenda, which looks at women as inferior beings and belittle their effort to achieve equality and justice. While fighting against the BJP-RSS combine uncompromisingly, our struggle should include gender issues. Comrades like Geeta Mukherjee and others struggled for women’s reservation and representation and gender equality. It is on us now to carry that baton forward.

We should be aware that the Communist movement in India is almost a century old now and remains an important contributor and conscious-keeper in shaping and changing the political course in the country. We should remain conscious of our historical role in shaping the agenda for the country. From fighting the British imperialists to the inequalities of the Indian society, today communists, who have been and remain at the forefront, gave every popular movement a progressive ideological agenda. During these hundred years or so, Indian society has undergone major churnings and our future programme should be based on the constantly-evolving political situation around us.

While applying Marxism to Indian conditions, Communists have to intensify the struggle on the issues of caste, class and patriarchy. Revolution in India is to intensify class struggle against all forms of exploitations and enslavement for social justice, equality and socialism.

We, the Communists, should build popular movements on issues such as education, health, employment and housing to the people, particularly for the toiling people.

Comrades, It is the Left alone that can ideologically challenge and defeat the RSS providing an alternative. Our struggle should combine forces – all progressive, secular, democratic sections of the society – to uproot the discriminatory regime and cleanse the society of the hateful ideological influence of the RSS. We must not forget that the Left in co-operation with other secular, democratic and regional parties is equipped to play that role and as such, it is our historic responsibility. Our Party has been consistently saying that reunification of the Communist movement on a principled basis is the need of the emerging situation.

This is the challenge before us, to prove that we are dangerous for the RSS.

We should engage in introspection on how to achieve the unity needed to politically and ideologically defeat the RSS. The ongoing 23rd Congress of the CPI(M) and the upcoming 24th Congress of the CPI in October 2022 are the best platforms for us to introspect, discuss and debate all those issues and come up with concrete actionable programmes corresponding to the realities of our times.

Comrades and friends, I am certain that the deliberations of the 23rd Congress of the CPI(M) will contribute in the consolidation of Left unity and popular struggles against the RSS–BJP combine.

I wish the 23rd Congress of the CPI(M) all the success.

## This was the address given by the CPI general secretary D. Raja at the inaugural session of the CPI(M) Party Congress in Kerala on April 6.