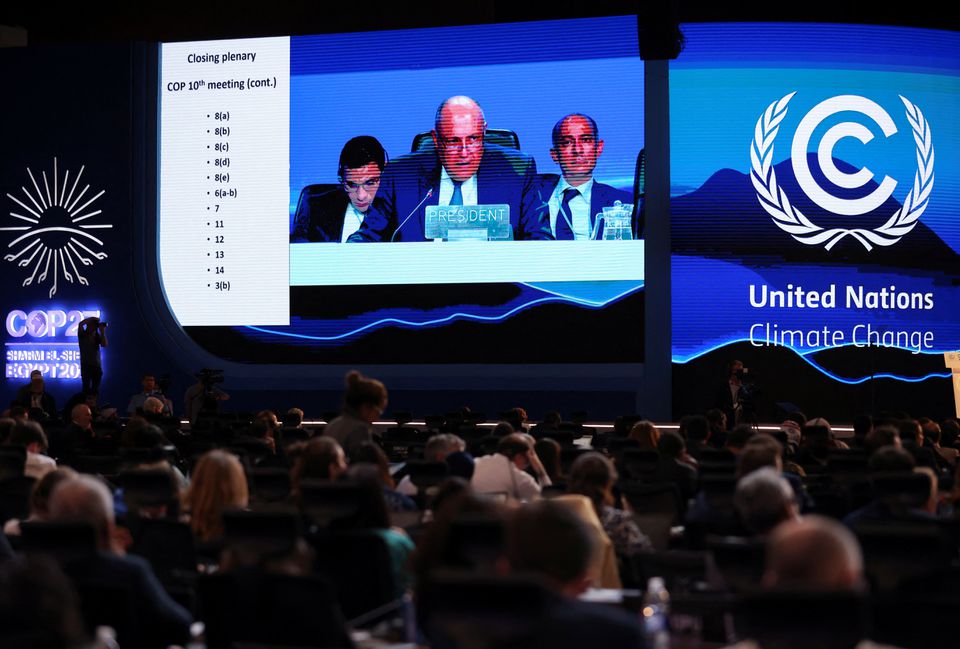 Outcome of CoP27 makes a history in agreeing on setting up a loss and damage fund to help the developing countries, but failed to agree on greater actions to successfully deal with the rising temperature of the Earth, that the Paris Agreement of 2015 has set to limit to 1.5 degree Celsius. The world finally settled for a very weak agreement on preventing the climate crisis.

Achieving an agreement to set up a loss and damage fund is just the beginning. G77 plus China has said, “We hope that when the fund becomes operational, it can reflect the level of urgency and the needs of developing countries. A big responsibility is now in the hands of the committee that will design the fund.”

After very tense negotiation rounds that ran over the Friday deadline and went through the night, the participating countries finally agreed to set up a fund to help poor developing countries being battered by climate disasters. The final draft text of the overall agreement was released early in Sunday and a session approved the text’s provision to set up a “loss and damage” fund.

It was a historic victory for the developed and poor countries that have been suffering a range of climate disasters in the sense that they have been demanding for such a fund for the last 30 years since the UN Framework Convention on Climate Change was signed in 1992. However, the deal signed by the parties has actually delayed approving a wider deal to outline the global resolve and action that could be binding on all countries so that the world can successfully fight the climate crisis from the rising temperature of the Earth.

The deal has left, rather pushed out from the deal, many of the most controversial decisions even on the fund into the next year. Countries have decided on a “transitional committee” that would go into the issues and finally make recommendations for countries, which would put at the COP28 climate summing in November 2023 for adoption.

The deal can also be said to be historical victory of the most vulnerable poor and developing countries because their demand for a separate “loss and damage” fund have all along been resisted by developed countries who have simply refused the demand. They have rather creates several other mechanism for financial assistance to rescue and rebuild disaster stricken countries. The suffering countries were being provided limited cash instead to help them cut greenhouse gas emissions and build defences against climate disasters. Such helps were like drop in the ocean. Therefore, developed countries agreement to set up such a fund in principle is a step forward, a historical, in mitigation of part of disaster loss and damage. It should be noted that EU, US, UK and other developed countries had all agreed in principle to the proposal for setting up a loss and damage fund.

However, over emphasizing and celebrating the victory by telling the world as Mohamed Adow, director of energy and climate at the thinktank Power Shift Africa, has said that COP27 had done what no other COP has achieved, should be interpreted cautiously, since the agreement has actually delayed the binding agreement to contain the ever rising greenhouse gas emission that is the real culprit behind the rise in temperature.

The bitter conflict between the rich and the poor nations during the negotiation rounds has sufficiently indicate that the rich countries were big in commitment but doing only a little. At one time, even the Secretary General of the United Nations had said that there were efforts of “greenwashing” and countries are doing less than they have committed in COP26 in Glasgow, which meant the world was not on track to achieve net-zero by 2050. The second and the third largest emitters China and India had officially declared to achieve net-zero by 2060 and 2070.

While the most vulnerable island nations demanded compensation from even China and India, both the countries have thwarted the bid to be clubbed them together with the developed countries. Both the countries argued that they are still developing countries. Moreover, India said that its historical contribution in the emission is just about 4 per cent, and the world will not have any climate crisis if it stick to per capita emissions at India’s level. On the other hand, the rich countries argued that rapidly growing countries such as China, India, and oil producers such as Saudi Arabia and other petro-states should contribute to the loss and damage fund rather than receive from it to repair climate “loss and damage”.

The rich countries had also wanted to ensure that the countries receiving cash from the fund are the most vulnerable, rather than those with big economies that are still classed as “developing” under the UN Framework Convention on Climate Change 1992. It should be noted that India has been implementing climate measures almost on its own and with little financial and technological help from the developed countries. It is in this background India will need to work hard in bargaining in the coming months to ensure food, fertilizer, and energy security for its citizens while adopting climate change measures.

Majority of the countries including the UK fought hard during the negotiation talks to keep alive the global vow made last year at COP26 in Glasgow of limiting global warming to 1.5 degree Celsius above the pre-industrial level. Some nations had even threatened to unpick this commitment, weakening the temperature goal and removing the requirement made last year for countries to update their emissions-cutting plans each year. The very attitude is a serious concern for the global fight against climate crisis.

Moreover, the agreement has nothing in it that would strengthen the weakening efforts on emission reduction in polluting countries and mobilize greater financial and technological resources, and the efforts in this direction were not consented upon by developed countries. Even the proposal to phase-down all fossil fuels, which was originally put forward by India and supported by many countries, failed to make into the final agreement. Last year phasing down of coal was agreed upon, but it has become a mockery of an agreement since several countries are expanding coal-based electricity generation plants.

Agreement has taken note of the fact that the world requires $4 trillion every year as investments in renewable energy until 2030, low carbon development path require $4-6 trillion every year, and developing countries need $5-6 trillion by 2030 to fulfill their climate promises to reach net-zero target. However, only $100 billion is being delivered by developed countries to developing countries every year. COP27 final agreement thus has achieved only a little, and the world needs to do much more to avoid the catastrophic climate change in near future. (IPA Service)

Siddhartha Mukherjee’s Third Book ‘The Song Of The Cell’ Is A Masterpiece
Posting....