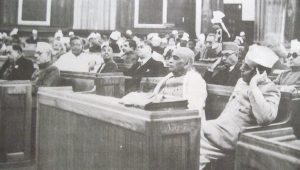 India’s record of taking up labour issues in a progressive manner predates the observation of May Day, on May 1, 1891, as the first international Labour Day. In 1884, seven years before the commencement of May Day celebrations in 1891, Narayan M. Lokhande, hailed as the father of trade union movement in India, founded the Mill Hands Association, constituting the beginning of the labour movement in India. In the absence of any safeguards for their safety and security, workers were forced to work in harsh and unhealthy working environments, and suffered untold misery and exploitation. Moved by their plight, Lokhande launched a movement against mill owners, and exerted pressure on them to concede to their demands for fair wages, a healthy working environment, and protection of their rights and liberties.

One of the outcomes of the movement was the establishment of the Factory Labour Commission, of which he was made a Member. Because of the work of the Commission, the Factory Act of 1891 was enacted. It, to some extent, regulated working conditions, and accorded some special rights to child and female labourers. Lokhande also focused attention on non-working people who were also victims of exploitation. His movement for the rights of labour was broad enough to include women’s causes, and the issues concerning Dalits, minorities and other weaker sections of society. One of the defining aspects of the freedom struggle was the championing of the rights of labour by our leadership. It was best exemplified in the Resolution on Fundamental Rights drafted by Mahatma Gandhi in 1931. It contained provisions for:

With such a glorious legacy of taking up the cause of labour from the 19th century onwards, Indian leadership represented a progressive outlook. It clearly outlined its commitment to take it forward when the country embarked on the arduous task of framing the Constitution and remaining engaged in the challenging task of nation-building.

Article 43 (the corresponding article in the draft Constitution is 34) of the Directive Principles of State Policy prescribes that the State would provide to all workers work, a living wage, conditions of work ensuring a decent standard of life, and full enjoyment of leisure and social and cultural opportunities. When the article was being discussed in the Constituent Assembly on November 23, 1948, H.V. Kamath suggested that “the Government will take advantage of this and act up to it and see that in accordance with the terms of the article, all workers, industrial or otherwise, are secured work, a living wage and a decent standard of life.”

In fact, in the draft article, the words “all workers, industrial or otherwise” were used. S. Nagappa moved an amendment and suggested that after the words “to all workers, industrial or otherwise”, the word “agricultural” may be added. Dr. B.R. Ambedkar stated that “Mr. Nagappa’s suggestion that agricultural labour is as important as industrial labour and should not be merely referred to by the word ‘otherwise’, has some substance in it”. He, therefore, accepted the amendment and that was how agricultural labour was treated on equal footing with industrial labour. Such sensitivity displayed by private Members to clearly and categorically make the idea of labour inclusive, and the acceptance of such ideas for final inclusion in the Constitution spoke volumes for the progressive outlook of the framers of the Constitution.

Article 23 of the Constitution of India prohibits traffic in human beings and forced labour. The article was discussed and adopted on December 3, 1948, for inclusion in the Constitution. Almost a year later on December 1, 1949, Dr. M.M. Das asked Labour Minister Jagjivan Ram a question, in the Constituent Assembly (Legislative) concerning the steps taken by the Government to stop forced labour. The Minister replied that an Officer on Special Duty was appointed to study the matter and submit a report pointing out inadequacies in law and suggest measures to eradicate the evil.

Later, on December 16, 1949, R.K. Sidhwa, a member of the Constituent Assembly, moved a private Member’s Bill – the Prevention of Free or Forced or Compulsory Labour Bill. While doing so, he stated that while in the draft Constitution a provision was already enshrined for the abolition of forced labour, separate legislation would be required for giving details of punishment for those who would be engaging in free labour and force others to labour for them. Labour Minister Ram, in his reply, assured Sidhwa to withdraw the Bill as the government was ceased of the matter. He also maintained that a mere constitutional provision or legislation would not eradicate the scourge of forced labour and stated that, “A strong social consciousness among the people from whom forced labour is taken and also among the people who take the forced labour is necessary before the evil can be totally eradicated.” Eventually, Sidhwa withdrew the Bill.

It is instructive that Sidhwa also introduced another private Member’s Bill – the Workers’ Provident Fund Bill – on December 16, 1949. He forcefully pleaded that the Provident Fund Act existing then was limited in scope, so he provided in his Bill that any worker whose monthly income was Rs. 20 would be entitled to provident fund, which would consist of contributions both from the employee and employer. He argued that facilities of provident fund should cover workers not only working in the government sector, but also in societies, charitable institutions, factories, shops, residential hotels, restaurants, places of entertainment, commercial firms, docks, jetties, tramways, and so on. He asked, “Is it fair that these men who toil for a number of years, 30 or 35 years, should not get any benefit or advantage after retirement?” He also raised the issue of pension for workers so that they would be secure in their retired life.

Minister Ram did agree with the core provisions of the Bill and requested Sidhwa to withdraw it as the government was planning to bring comprehensive legislation to make provisions for provident fund for labourers of all sectors. Eventually, Ram, as Labour Minister, was the architect of the Provident Fund Act, 1952 which was very broad in scope and benefitted large sections of labour employed in various sectors.

These two instances from the Constituent Assembly (Legislative) debates reveal that initiatives of private members to sensitise the government by introducing Bills concerning labour issues eventually resulted in the government introducing comprehensive legislation.

Several other legislations such as the Industrial Disputes Act, 1947 and the Minimum Wages Act, 1948 were enacted after Bills concerning those legislations were adopted in the Constituent Assembly.

The legislative intent behind legislation such as the Provident Fund Act has been diluted and now in the neo-liberal era, the labour force is at the mercy of market mechanisms which are exploitative and dehumanising. Even pension provisions have been considerably watered down to the disadvantage of workers in all segments of the organised sector. The conditions of the labour force in the unorganised sector are worse.

Labour remains at the root of the rise and progress of any society and country. We can ignore labour only at our own peril. Mahatma Gandhi gave primacy to labour. Before he started his first satyagraha in South Africa, he had drafted a petition to safeguard the rights of Indians and he did so by first consulting labourers. When he was asked as to why he was consulting labourers to draft the petition, he famously said that they had as much right to exercise their brains as anybody else.

He advocated the idea of trusteeship to ensure that those who had wealth and knowledge to create wealth would act as trustees of that wealth, and after keeping some amount of wealth for their living, should use rest for society. He proclaimed that the idea of trusteeship aimed at resolving the contradiction between capital and labour.

Now, contradiction between labour and capital has been intensified. French economist Thomas Pickety, in his book ‘Capital in Twenty First Century’ outlined massive levels of income inequalities in the present day world; these inequalities are indicative of increasing contradictions between capital and labour. At a time when labour is getting crushed, the idea of trusteeship expounded by Gandhi assumes significance.

It is tragic that now the ruling leaders of India have failed its labouring class and miserably ditched it by not recognising its members as equal human beings, through their attempts to dispense with several progressive labour laws.

Taking advantage of the economic imbroglio caused by the COVID-19 pandemic and serious livelihood consequences suffered by labourers due to the unplanned national lockdown, now a new architecture for the revival of the economy has been prepared by dispensing with security and safety guaranteed to labour through statutes. The recent relaxation of most labour regulations in several states is like introducing forced labour, which has been abolished by the Constitution, and against which Constituent Assembly member Sidhwa introduced a resolution in the Assembly.

What is required in India is a caring government, at the heart of which, as stated earlier, remains the progressive vision articulated in the 19th century during the freedom struggle, and at the time of framing of the Constitution, for the rights and entitlements of labour and the ordinary people of India. (IPA Service)