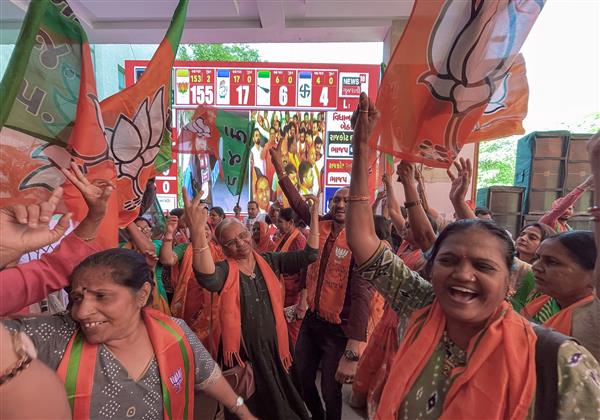 Delhi Municipal Corporation polls results on December 7 and Vidhan Sabha election results of Himachal Pradesh on December 8 should enthuse Congress on several counts chief of which is the shadowing of electoral prospects of its prime rival BJP, which has performed well only in Gujarat the home turf of PM Narendra Modi.

AAP has thrown BJP out of power from MCD which they have been ruling since 2007, while Congress is set to wrest power with winning majority seats from the saffron party in Himachal Pradesh amidst rumour that BJP could upset their applecart through defection. BJP had to suffer humiliating defeats both in Delhi and Himachal Pradesh. Congress gain in Himachal Pradesh is spectacular.

Gujarati’s decided just to honour the PM Narendra Modi from among themselves who aroused their Gujarati sentiment and sympathy in his favour as a ‘victim of being defamed’ during his election campaign, and hence does not reflect political sentiment of the people.

These results are a stark revelation that BJP’s Hindutva, along with Narendra Modi’s charisma, and BJP’s Chanakya Amit Shah’s electoral strategy have become considerably weakened or rather not working as effectively as their followers have been thinking. Since Congress is the largest national political party in opposition in the country having support base across the country which seems to be rising during last few months of Bharat Jodo Yatra led by Rahul Gandhi, shadowing of the BJP’s political prospects in this manner will certainly bring the party forward with greater advantage during the big political fight in general election 2024, which will be held only about 18 months from now.

In 250-seat Municipal Corporation of Delhi, Congress could bag only 9. It was the first election after unification of three municipal corporations in Delhi. There were three municipal corporations in 2017, when elections were held for 272 seats. AAP had contested the elections for the first time and had won 49 seats pushing Congress to their position with 31 seats in its bag. Congress has thus found a formidable political competitor in AAP. Many have interpreted this as existential threat to the Congress as its share of votes slumped by about 10 per cent from 21.21 per cent it had gained in MCD polls 2017. However, such an interpretation may have some errors on account of sharp polarization of voters, a larger section of which votes against BJP to only winnable candidates, a trend that has been in existence throughout the country, and hence they cannot be counted as anti-Congress.

Himachal Pradesh results show it. AAP had also fielded their candidates in this Vidhan Sabha election, but they electorally performed very badly, and the election remained bipolar between BJP and Congress. A large section of voters voted against the ruling BJP to only winnable opposition candidates who happened to be of Congress.

Therefore, rise of AAP in Delhi must not be interpreted as a phenomenon that would work necessarily against Congress across the country, though it had recently unseated Congress from Punjab. It should be noted that Congress was a badly divided house in Punjab just before Vidhan Sabha elections, and the two opposing groups in the infighting worked against each other during the election that turned into advantage AAP at a time when the farmers were angry on the regional party Akali Dal that had parted ways from the BJP.

Though there is an alarm bell ringing against the Congress on account of infighting in the party in several states where they are ruling or have large support base and where AAP is seriously trying to make inroads. Himachal Pradesh result shows that APP does not succeed to make inroads when there is united Congress. Rather AAP succeeds only where there is an ugly infighting within Congress and is virtually not in a position to take on BJP candidates successfully. The anti-BJP voters tend to vote  to any political party’s candidates according to their perceived winning  chances.

Gujarat election, though not reflecting real political preference of the voters but the Gujarati sentiment and sympathy factor for Narendra Modi, also shows that winnability against BJP candidates is a major anti-BJP vote catcher and in absence of it votes, become distributive. If AAP has made inroads for the party there, it is precisely because of this reason.

Congress has thus two major lessons for the big fight against the BJP in 2024 general election – first, the party needs to contain infighting, and secondly it should make alliance with dominant regional political parties in states. Though AAP led by Arvind Kejriwal has emerged as more brightened political star, they are ineffective where there is a dominant regional party or stronger and united Congress in fight against the BJP. This could be disheartening for AAP, which may compel them to make alliance with regional parties, many of which are more than willing to make a grand alliance against the Modi-Shah duo and BJP with Congress in the lead. (IPA Service)