Congress Leadership Has To Do Real Introspection On Its Poll Debacle 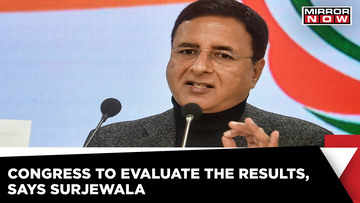 Just a day ahead of the counting of the votes, March 10, for the assemblies of five states, the Prime Minister Narendra Modi had observed emphatically that soon India will be a Congress Free Bharat. His tone bore the impression of an assertive authority. Ever since taking over the office of the premier he has been busy planning decimating Congress.

An insight into the functioning of the Congress would reveal that the party in fact on the verge of getting disseminated and losing the identity. The results of the assembly elections to the five states – Uttar Pradesh, Punjab, Uttarakhand, Goa and Manipur – have made ii absolutely clear that Congress has lost its relevance and existence. It is an irony that on most of the seats in Punjab, where till a day Congress was in power, in this election its candidates failed to even protect their deposits. This is worst to happen with the Congress.  It may not be exaggeration to say that the Congress lost Punjab due to arrogance and utter lack of understanding of the ground realities by the leadership. They treated the Congress as its fiefdom.

Rahul Gandhi went around UP and held public meetings. He ought to have realised that mere addressing of rally does not fetch votes. Your lecture and appeal must convince the people of your intention. But in Congress its words and intentions do not match. Leadership has to connect and motivate workers, cadres and members. But Congress campaigning made it clear that he did not have that perspective. Fighting and winning an election needs a concrete strategy and machinery. Sonia Gandhi cannot say that she has built a strong electoral mechanism and committed rank of cadres. Ironically the Congress leadership always relied on the charisma of Nehru-Gandhi family members  without realising that the political economy has changed drastically.

Congress leadership tried to perpetuate it even after it has lost relevance. I remember one incident. It was in 1983 a group of dedicated Youth Congress cadres in Kidderpore of Calcutta who had taken out a rally in emergency protesting against imprisonment of Chandra Shekhar, who was at that  time the CWC member had organised a meeting in a library for the first time to oppose “parivarvad”, dynasty.

But it did not alter the Congress leadership. However the worst is before us now. Congress lost Punjab due to the arrogance attitude of the Congress leadership. When everything was going well, what was the reason to sack Amarinder Singh as the chief minister. Again what made Rahul Gandhi to install Navjot Sidhu when he had already earned severe criticism and had become most unpopular. Ever since Channi was made the CM, he has been busy launching a venomous campaign against Channi. He was not publicly pulled up for being the associate of Rahul. – Priyanka. Strangely, interest of the party was ignored to protect a personal friend.

The situation was used by the AAP. What was quite interesting that instead of targeting the BJP, the AAP also targeted the Congress. Otherwise too the primary reason has been the BJP does not have base in Punjab. Besides targeting the Congress provided much better leverage to the AAP. It would claim to be a national party.

Rahul took upon the sole responsibility of calling upon the people  and motivate them to vote for Congress. But probably he had forgotten that he was fighting Modi, who has more pronounced support and followers has been proved beyond doubt that he is the only leader superior to others. In this backdrop a collective leadership campaign would have been helpful to meet the challenge

The atmosphere was congenial for the defeat of the BJP in UP. Though the Congress was not a main opposition player, even the ground work done by Priyanka Gandhi failed to yield results. This primarily owes to the lack of motivated and committed cadres. In elections campaigning and holding of public rallies are not only the key factors, for ensuing the victory of candidate it is imperative that the party must have well organised cadres to move door to door and  take the voters to the polling stations. But Congress utterly lacked it.

BJP losing nearly 60 seats in comparison to what it achieved in 2017 is testimony to the fact that its support base has been on sharp decline. Though yet to be officially substantiated it cannot allege some amount of loot has been made in the EVM, nevertheless the detection of such large number of buses and truck carrying EVM in the dead of night underline that huge electoral has taken place. It cannot be denied that this manipulation should not have help the BJP electorally. The BJP can claim to retain its hold on UP, but the fact is it is truncated and reflects people disappointment.

If Congress really intends to keep its position at the national level and continue to play a major role, it must bring about fundamental organisational changes. The word dynastic which has become pariah for common people must be abandoned by bringing a new face as the party chief. Sonia must remember in politics sacrifice has much value, in fact more than getting power. By doing this Congress will get back the prestige and respect on the people, It will never be a loser.

This victory will help the BJP to consolidate and strengthen its position at a time the party has been getting ready for a major electoral show in 2024. But it cannot be claimed that it would strengthen its political grip and ideological stature. It has lost much of its moral clout. People have been some wrong play. This victory has some different structure and paradigm. It cannot be related to the uniform structure.  A victory in UP alone cannot be taken as the indicator   for 2024 possible win.  The peoples’ mood is decisive. It is for the opposition to mould and win people’s perception. (IPA Service)