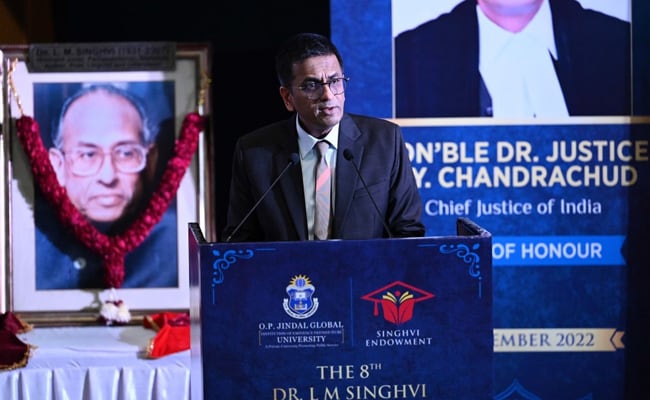 Chief Justice of India DY Chandrachud on Saturday called the basic structure doctrine a North Star that guides and gives certain direction to the interpreters and implementers of the Constitution when the path ahead is convoluted.

The remarks by the CJI came against the backdrop of the recent remarks by Vice President Jagdeep Dhankhar who questioned the landmark 1973 Kesavananda Bharati case verdict that gave the basic structure doctrine. Mr Dhankhar had said the verdict set a bad precedent and if any authority questions Parliament’s power to amend the Constitution, it would be difficult to say “we are a democratic nation”.

Delivering the Nani A Palkhivala Memorial Lecture here, the CJI said craftsmanship of a judge lies in interpreting the text of the Constitution with the changing times while keeping its soul intact.

“The basic structure of our Constitution, like the north star, guides and gives certain direction to the interpreters and implementers of the Constitution when the path ahead is convoluted,” he said.

“The basic structure or the philosophy of our Constitution is premised on the supremacy of the Constitution, rule of law, separation of powers, judicial review, secularism, federalism, freedom and the dignity of the individual and the unity and integrity of the nation.”

The CJI said that from time to time, we require people like Nani Palkhivala, who was an eminent jurist, to hold candles in their steady hands to light the world around us.

“Nani told us that our Constitution has a certain identity which cannot be altered.” He said the doctrine of basic structure has shown that it might be beneficial for a judge to look at how other jurisdictions have dealt with similar problems for them.

Dhankhar, who is the Rajya Sabha chairman, recently said he does not subscribe to the Kesavananda Bharati case verdict that Parliament can amend the Constitution but not its basic structure. He had asserted that parliamentary sovereignty and autonomy are quintessential for the survival of democracy and cannot be permitted to be compromised by the executive or judiciary.

The CJI noted that legislations such as the Competition law and the Insolvency and Bankruptcy Code have been enacted to promote fair market competition. Similarly, the Goods and Services Tax (GST) has sought to streamline indirect taxation on the supply of goods and services in India, he added.

“If you look at the Constitution, it does not favour unbounded economic liberalism. Rather, our Constitution seeks to find the right balance.”

The CJI further said the Constitution allows the state to change and evolve its legal and economic policies to meet societal demands.

He said that when individuals have the opportunity to exercise their liberties and to be fairly rewarded for their efforts, then economic justice becomes one of the many inter-related dimensions of life.

Ultimately, we share common faiths and destinies to the point that development of each individual fosters social justice in the entire world, he added.

Talking about Palkhivala and several prominent cases in which he was involved, the CJI said the eminent jurist was at the forefront of preserving the very identity and cardinal principle embedded in the Constitution.

“Nonetheless, the larger picture of legal culture and local dimensions of law, which are dictated by the local context, should never be obfuscated. Law is always grounded in social realities.”