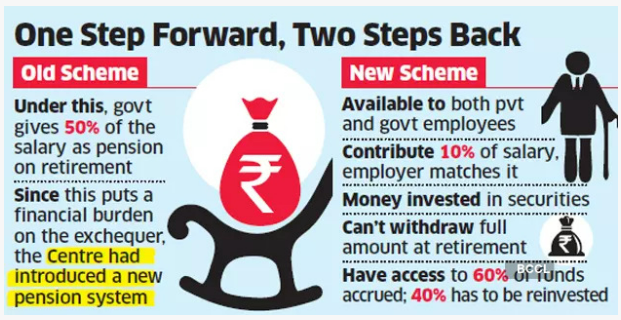 The Devil of a New Pension Scheme (NPS) has now surfaced impacting government employee-pensioners in India, many of whom are getting a paltry monthly pension in the range of Rs 2000-Rs 4000 per month retiring after 18 years of service as a government employee. In the Old Pension Scheme (OPS), they would have been getting a minimum pension of Rs9000 per month apart from other benefits. The situation led to – a demand of restoration of OPS, assurance given by non-BJP political parties during recent state elections to fulfil it, and even tweaking of NPS by the BJP.

AAP had promised restoration of OPS in Punjab during the Vidhan Sabha Election campaigns. AAP even won the election and formed its government in the State. Congress has promised restoration of OPS during the Himachal Pradesh Vidhan Sabha election. Congress has also won the election and formed its government. The ruling BJP in Gujarat has tweaked the NPS just before the Vidhan Sabha election, and they have won it, and formed their government. Though on cannot argue the issue of pension as the only deciding factor for voters in general, but it cannot be denied that it has influenced the voters from the families of government employees, and also the employees themselves who are demanding better old age security in lieu of their lifelong service in the form of enough amount of pension to take care of their needs.

The BJP led Gujarat government’s tweaking NPS before the elections has led to rumours that the Modi Government was going to replace NPS with the OPS. A message even went viral on social media claiming it, but there is no such plan being considered by the Union Government right now. In a reply to a question by Member of Parliament Asaduddin Owaisi on December 12, the Union Minister of Sate for Finance Dr Bhagwat Karad has said, “There is no proposal under consideration of the Government of India for restoration of old pension scheme.”

The reply does not include tweaking of even NPS, but there is strong possibility of it, as we have seen how the BJP had tweaked it just before Gujarat election. The BJP led Gujarat government keeping the state assembly elections in mind had reduced the restoration of commuted pension after 13 years instead of 15. Apart from this, in the OPS also, the ages for different level of increase on pensions have been reduced. Tweaking of NPS is also possible since the Parliamentary Standing Committee has recommended that pension should be increased by one per cent every year that is five percent after 65 years and soon.

Though the Modi government is aware of the political implications of the issue, which the Gujarat tweak indicates, it is sticking for now on the NPS. Not only that the government is also trying to armtwist the states who are trying to revert to OPS by denying their demand to return the accumulated corpus of subscribers under the NPS.

In the reply in Parliament, the Union Minister of State for finance has said that proposals to return the accumulated corpus under NPS have been received from Rajasthan, Chhattisgarh, and Jharkhand, but no such proposal has been received from Punjab. It should be worth mentioning that the Government of Punjab had issued a notification on November 18, 2022 regarding implementation of OPS to the government employees who are presently being covered under NPS.

The Minister has said, “PFRDA has informed the respective State Governments that there is no provision under Pension Fund Regulatory and Development Authority Act, 2013 read along with PFRDA (Exits and Withdrawals under the National Pension System) Regulations, 2015, and other relevant Regulations, as amended from time to time, vide which the funds, which are already deposited both in the form of Government contribution and Employees’ contribution towards NPS, along with accruals, can be refunded and deposited back to the State Government.”

In the meantime, government employees of the Centre and several states have been demanding restoration of OPS and demonstrating in support of their demand. All India Pension Restoration United Front (AIPRUF) and National Old Pension Restoration United Front (NOPRUF) have announced joint protest on January 1, 2023 for the demand of restoration of Old Pension Scheme. In Jammu and Kashmir, the local unit has declared that they will be fighting for OPS until it is restored. All Assam Government NPS Employees’ Association has also threatened to start a fresh agitation for revocation of NPS and restoration of OPS. In Kerala, AITUC led government employees “March to Secretariat”. Even defence civilian employees had recently organised sit-in protest in Delhi. The agitation has been spreading across the states in the country.

CPI has even passed a resolution in 24th Congress in October 2022 against the NPS implemented in 2003 by the then BJP led NDA government. The resolution demanded restoration of defined, guaranteed and non-contributory old pension scheme in place of no-guarantee NPS.

When NPS was introduced in the country, all left front state governments – West Bengal, Kerala, and Tripura – had refused to implement it and sticked to OPS. However, with change of governments later, Kerala and Tripura implemented the NPS, while West Bengal continues with OPS.

The issue is thus likely to haunt the Modi government during the states’ elections in 2023, and the Lok Sabha Election in 2024. More non-BJP political parties are likely to come forward in support of restoration of OPS to derive its political benefit, while Modi government may go for some changes in NPS to limit political damage to the party. (IPA Service)