Bulldozer Politics Is Getting Institutionalised In Uttar Pradesh Under Yogi 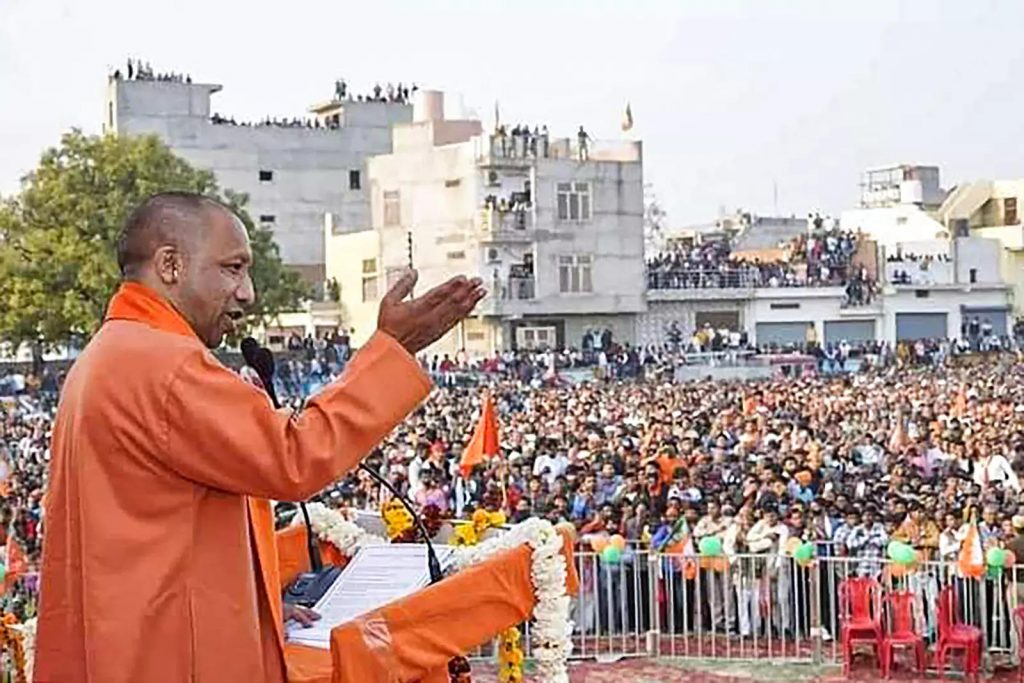 Yogi Adityanath, who took oath as the Chief Minister of Uttar Pradesh for the second time consecutively on March 25, is generally referred to as “Maharaj ji”. He earned his new tag of “bulldozer baba” during the recent elections due to his frequent reference of the heavy JCB machine which his government deployed to raze the property of alleged criminals and mafias in the state. After a road accident in UP in which a Bulldozer completely smashed a cycle , the supporters of Yogi and BJP leaders used this meme to exhibit the muscle  power of Yogi. Throughout the state the  cadres and  supporters were seen taking out victory processions on bulldozers and chanting slogan “bulldozer baba zindabad (long live bulldozer baba)” in praise of Adityanath. Bulldozer became a major rallying point during the Assembly elections. From campaigning to victory, the BJP and RSS cadres and supporters carried replicas of bulldozers.

Taking a cue from Yogi, barely four days back the chief minister of Madhya Pradesh Shivraj Singh Chauhan   launched the Yogi’s version of Bulldozer, the sobriquet Bulldozer Mama with the similar mission to finish crime and criminals. The state administrations of UP and MP have demolished hundreds of palatial houses allegedly owned by the criminals and mafias.

Nevertheless independent sources allege that this mechanism is used to harass and frighten the political rivals of both the leaders Yogi and Mathur. It is also alleged that since the criminals are working under complete control of the rulers and the ruling party, the administration refrains from laying its hands on them.

The BJP, RSS cadres and supporters of Yogi epitomise the use of Bulldozer as the symbol of Yogi as the strongman.  They claim that a strongman like Yogi can only resort to this mechanism and provide a nice and development oriented administration. But this is purely a perverse and tyrannical notion.  A ruler having trust in rule of law will never resort to such tyrannical mode of rule.

Greek philosophers Plato and Aristotle explored political philosophy. Aristotle concluded that “it is evident that the form of government is best in which every man, whoever he is, can act best and live happily.” A tyrannous government cannot provide a peaceful life. The rule of Bulldozer creates a national government dominated by tyranny.

This Bulldozer politics provides absolute power to ruler. Tyranny occurs when absolute power is granted to a ruler. In a tyrannical government, the ruler becomes corrupt and uses his power to further his own interests instead of working for the common good. The rule of law is the principle that no one is exempt from the law, even those who are in a position of power. The rule of law can serve as a safeguard against tyranny, because just laws ensure that rulers do not become corrupt.

What is the rule of law? How can it help prevent tyranny? The rule of law is fundamental to peace and security and political stability; to achieve economic and social progress and development; and to protect people’s rights and fundamental freedoms. It is foundational to people’s access to public services, curbing corruption, restraining the abuse of power, and to establishing the social contract between people and the state. Rule of law and development are strongly interlinked, and strengthened rule of law-based society should be considered as an outcome of the 2030 Agenda and Sustainable Development Goals (SDGs).

A ruler must have complete faith in rule of law. But resorting to rule of  Bulldozer makes it amply clear that the ruler does not have faith and trust in the Rule of Law and Democracy: Addressing the Gap Between Policies and Practices, notwithstanding the fact it has been acquired through electoral process.

The Declaration adopted on 24 September 2012 by the United Nations General Assembly at the High-level Meeting on the Rule of Law at the National and International Levels reaffirmed that “human rights, the rule of law and democracy are interlinked and mutually reinforcing and that they belong to the universal and indivisible core values and principles of the United Nations”.

This underlines that ‘Bulldozer Politics’ trumped the politics of rule of law. Certainly this could not be attributed as the beginning of the decimation & annihilation of mafias & dons in the state. Under the weight of bulldozer, SP’s Mandal politics miserably failed to challenge the Yogi dispensation.

At some election rallies, CM Yogi had also mentioned about bulldozers taking rest. He said bulldozers will get in action mode again, after elections. As the election results and trends showed a clear BJP majority in Uttar Pradesh, the Bulldozers swung into action.  The victory also witnessed renewal of the politics of lynching. In some rallies, bulldozers were seen parked at the venue of Adityanath public meetings in different places.

In Lucknow, Varanasi and Adityanath’s own Gorakhpur, enthusiastic party supporters were seen taking out victory processions on bulldozers and chanting slogan “bulldozer baba zindabad (long live bulldozer baba)” in praise of Adityanath. Opponents of Yogi has been at the target of the Bulldozer politics. This is evident from his own statement; “It appears as if the Yadavs have decided not to mend their ways. There is a huge difference in what they call themselves and what they do. Though they call themselves socialists, they act like terrorists and think like dynasts (naam toh samajwadi, lekin kaam aatankwadi, soch pariwarwadi hai).” (IPA Service)