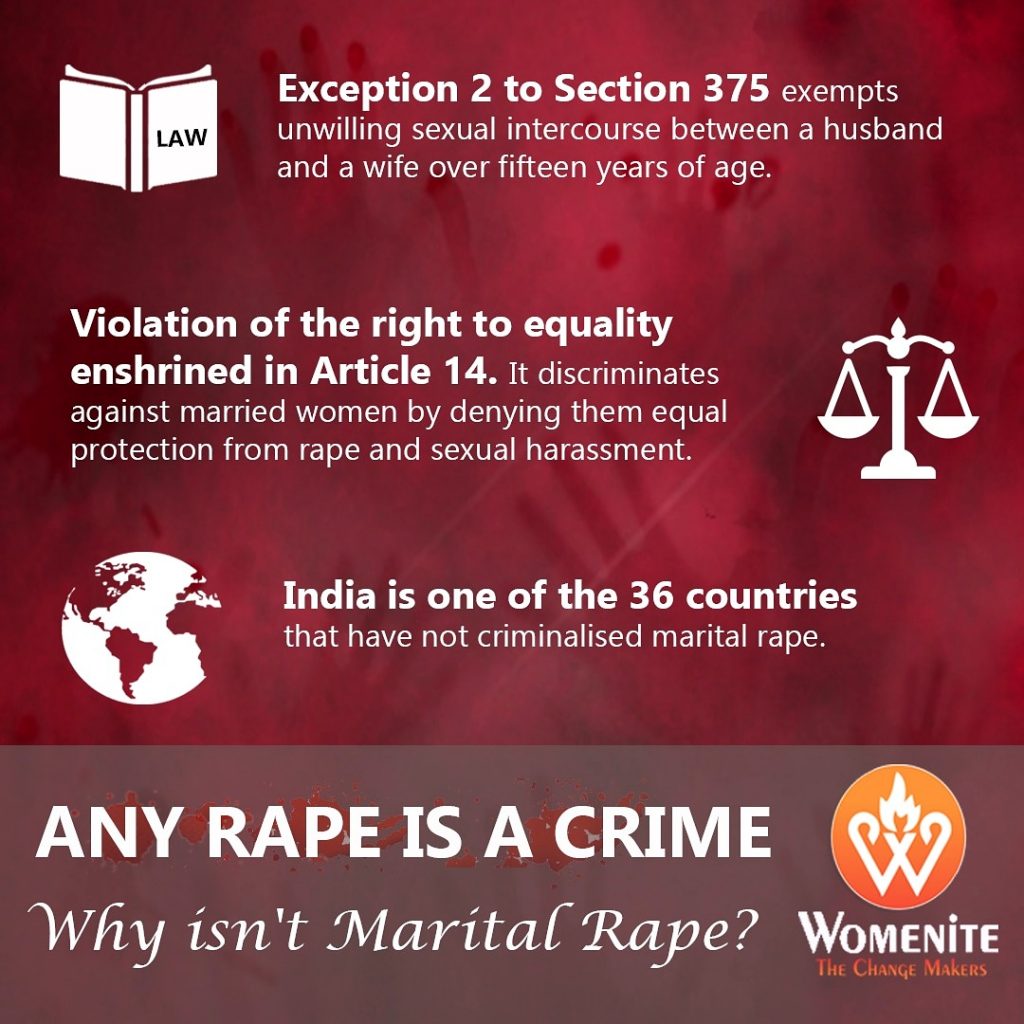 Law performs both a normative function and a descriptive function. Criminal law constitutes offences which are punishable with imprisonment and/or fine. The law of rape is normatively defined in Section 375 of the Indian Penal Code [IPC] as being a sexual act performed on a woman against her will, or without her consent. Hence, a normative element of the offence is the absence of ‘consent’ to the sexual act, defined as “unequivocal voluntary agreement when the woman by words, gestures or any form of verbal or non-verbal communication, communicates willingness to participate in the specific sexual act.” To this norm, there is an exception which is commonly known as the “marital rape exception”:

“Exception 2. — Sexual intercourse or sexual acts by a man with his own wife, the wife not being under fifteen years of age, is not rape.”

What then is the object of the exception to the norm of consent to every sexual act between two persons?

It is noteworthy that almost all of our laws contain no definition of what is the content of marriage. Our laws tell us how to enter a marriage and how to exit a marriage, but are completely silent on what happens during the subsistence of the marriage.

It is here that an egalitarian society must understand that marriage is a contract based on love, faith, trust, friendship, caring and sharing. No doubt, this includes sexual intercourse between the two parties to the marriage. Sexual intercourse, we must acknowledge, is also a source of pleasure to both the parties involved. If this is how we see the marriage contract to which a woman is supposed to have given implied consent to sexual intercourse, the question then becomes how do we understand Exception II of section 375?

Implied consent is not inconsistent with absence of consent to being sexually abused. Nor is there any law which prevents a woman from withdrawing the implied consent in a given set of circumstances. Viewed from this angle, the recent decision of the Karnataka High Court can be said to be a revolutionary interpretation of the Exception and creates an exception to the exception, giving relief to women trapped in abusive marriages when the main form of abuse is sexual abuse. A wife, after all, is in a captive situation sharing a roof with her abuser.

The question sharply posed by the single judge bench of Justice M. Nagaprasanna in this case was this: does a wife give implied consent to sex with brutality? And the answer is a resounding NO. Once that is clear, the exception is out of the way and rape would be rape by any name whatsoever.

Some indication of this interpretation can be found in Section 376B of the IPC:

376B. Sexual intercourse by husband upon his wife during separation. — Whoever has sexual intercourse with his own wife, who is living separately, whether under a decree of separation or otherwise, without her consent, shall be punished with imprisonment of either description for a term which shall not be less than two years but which may extend to seven years, and shall also be liable to fine.

Explanation. — In this section, “sexual intercourse” shall mean any of the acts mentioned in clauses (a) to (d) of section 375.

This section itself is a clear exception to the Exception II of section 375, indicating clearly that a wife can prosecute her husband for rape, however defined, when she is separated from him by a decree or otherwise without her consent.

We reach the conclusion that consent has a role to play when it comes to sex within marriage, and to that extent the Karnataka High Court order makes history.

The facts of the case are totally relevant. The wife had lodged complaint that she had become a sex slave to her husband right from the date of the marriage, and that her husband had compelled and forced her to have unnatural oral and anal sex by imitating pornographic films. She also alleged that he had sexually harassed their daughter. This complaint was converted into a First Information Report for offences under Sections 506 (punishment for criminal intimidation), 498A (husband or relative of husband of a woman subjecting her to cruelty), 323 (punishment for voluntarily causing hurt) and 377 (unnatural offences) of the IPC, and Section 10 (punishment for aggravated sexual assault) of the Protection of Children from Sexual Offences Act.

At the time of framing charges, the trial court charged the accused husband under section 376 of the Penal Code along with other offences. One of the sections under which the complaint was lodged was section 498A, which is for the offence of cruelty by a husband against his wife. Surely, a woman who alleges cruelty by a husband against her must be deemed to have withdrawn her deemed consent.

After holding that all ingredients of rape are satisfied, the judge concluded thus:

“29. The submission of the learned senior counsel that the husband is protected by the institution of marriage for any of his acts being performed, as is performed by a common man, again sans countenance, for the reason that institution of marriage does not confer, cannot confer and in my considered view, should not be construed to confer, any special male privilege or a license for unleashing of a brutal beast. If it is punishable to a man, it should be punishable to a man albeit, the man being a husband. [emphasis added]

The contents of the complaint are an outburst of tolerance of the wife of the brutal acts of the petitioner. It is akin to eruption of a dormant volcano. In the teeth of the facts, as narrated in the complaint, in my considered view, no fault can be found with the learned Sessions Judge taking cognizance of the offences punishable under Section 376 of IPC and framing a charge to that effect.”

The law declared here must therefore mean that a wife does not give “implied consent” to brutal sex by the husband.

Can we now answer the question when is an exemption not an exemption? Yes. For this, we must refer to the court’s observations reproduced hereinunder:

“31. The exemption of the husband on committal of such assault/rape, in the peculiar facts and circumstances of this case, cannot be absolute, as no exemption in law can be so absolute that it becomes a license for commission of crime against society. …”

The judge carefully notes that it is not for the judiciary to delete the exemption but for the legislature to do so, keeping himself well within the bounds of the judicial function:

It is on the facts of the case alone that the court concludes:

“This Court is concerned only with the charge of rape being framed upon the husband alleging rape on his wife.”

In an act of judicial statesmanship, the court interprets the exemption not to apply to brutality in sex. The ruling can be interpreted to mean that the so-called deemed consent to sex in marriage, which is the basis of the exemption, is withdrawn when sex degenerates into brutality.

Surely, the time has come for the legislature to decriminalize marital rape, failing which the courts will have to do so. (IPA Service)

The author is a Senior Advocate of Supreme Court of India. The views expressed are personal.