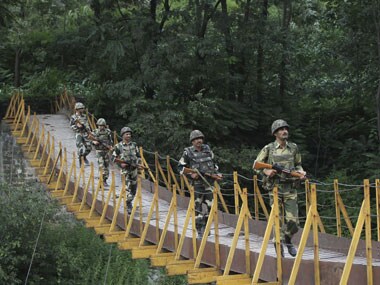 As the new year gets under way, the law and order situation along the difficult Indo-Bangla border (4096 kilometres long) still remains somewhat unsettled, despite the best preventive initiatives taken by the Border Security Force (BSF).

A cursory analysis of current criminal trends from the East and the Northeast border areas suggests that the medium term outlook for security maintenance is mixed: while there has been a major drop in cattle smuggling to Bangladesh, illegal infiltration causes concern.

The sensitive issue of illegal Bangladesh migration is a somewhat underplayed irritant in the context of otherwise warm Indo-Bangla bilateral relations. It belongs in the same category as the mutually agreed but as yet unresolved Teesta water sharing issue.

Over the years, India has had to pay a heavier diplomatic price for leaving such contentious issues pending indefinitely. China has won more space within the Bangladeshi interest map than India, by offering concrete steps to save the Teesta river. Also, at present, Dhaka has indicated it would stay ‘neutral’ between China and India when it comes to big power regional rivalry — a significant change from the days when it saw and declared its relationship with India as ‘special.’

Analysts feel Indian policymakers should appreciate that even among the friendliest of regional neighbours, long pending issues have definite consequences, as with most local developments, positive or otherwise.

To return to the existing situation along the indo-Bangla border : there is now a 360 degree divergence of official opinion about continuing illegal infiltration from Bangladesh on both sides of the boundary. BSF (South Bengal) authorities recently told newsmen that during the last three years, over 6500 Bangladeshis had been arrested for entering India illegally. This worked out to over 2000 arrests annually on average.

During the same period, over 2500 Indians were arrested for their involvement with various border-related crimes, including illegal cross- border movement of people.

The official Bangladeshi stand is that there has been no illegal infiltration into India from its territory in recent years, contrary to official Indian claims. Delhi-based Bangladeshi diplomats commenting on the matter once told Indian mainstream mediapersons that illegal movement of Bangladeshis to India had almost ended because of two reasons.

One, Bangladesh has made impressive economic progress by all accounts, which helped its citizens raise their living standards significantly. Two, the Bangladeshi diaspora, always active to explore opportunities abroad, was more keen to reach advanced countries in the EU such as Italy, or the US. Besides these days, the Bangladeshi taka and the Indian rupee were valued almost at par in recent years mostly, unlike in the past.

At present the number of Bangladeshis living/working overseas was over 7.6 million and it ir rising steadily.

Meanwhile, the BSF in Tripura has installed superior surveillance equipment and adopted measures like plugging drains and culverts with iron bars, in vulnerable border areas. Upgraded, sensitive cameras have been 100 installed along 24 points, according to reports.

Contraband smuggled goods worth Rs 35 crore were seized by end 2021, of which narco items accounted for Rs 15 crore. While 128 Bangladeshis were arrested in 2020 charged with illegal crossing, the figure dropped to 95 in 2021. Local authorities also complimented the Border Guard of Bangladesh (BGB) for their consistent co-operation in cracking down on border related crimes.

However, opinion in Bangladesh whether in the mainstream media or among political parties was not particularly favourable towards the crime fighting techniques of the BSF , nor positive about the present situation in the border areas.

Firing against armed criminals by the BSF often killing Bangladeshis remained a prickly issue. The number of fatalities during BSF operations has dropped significantly thanks to a strong media/HR groups campaign in Bangladesh in recent times. In some areas the BSF had agreed to use rubber bullets during clashes/encounters. Bangladesh authorities have also accused Indian troops of occasionally killing innocent people in the past.

Countering the change during joint meetings periodically held between BGB/BSF authorities, Indian officials said that often, even as they tried to engage/approach suspected cattle smugglers and others in conversation, the criminals opened first . The BSF had to retaliate in self defence. A number of BSF men too had died in shootouts with well armed criminals. .

In South Bengal, the authorities had succeeded in bringing down cattle smuggling sharply, unlike the situation prevailing elsewhere. There had occurred a near 100% drop in such smuggling over a five year period ending in 2021, BSF sources said.

BSF sources attributed their success to a variety of factors — increased co-operation from local people in south Bengal districts, better intelligence, the use of QRT (quick response teams) s in vulnerable areas, improved coordination and deployment of forces and resources along the border, more help from some NGOs, etc.

Both in Tripura and Bengal some areas remained without wire fencing. While the 856 km long Tripuira border will be completely fenced by end 2022, it would take more time to complete effective border in the much longer West Bengal border. Contentious land acquisition issues have emerged as a major problem in Bengal during the Trinamool Congress rule, whether for putting up new border outposts or for fencing, officials said. (IPA Service)