Both Assembly And Bypoll Results Expose BJP’s Faultlines Before 2024 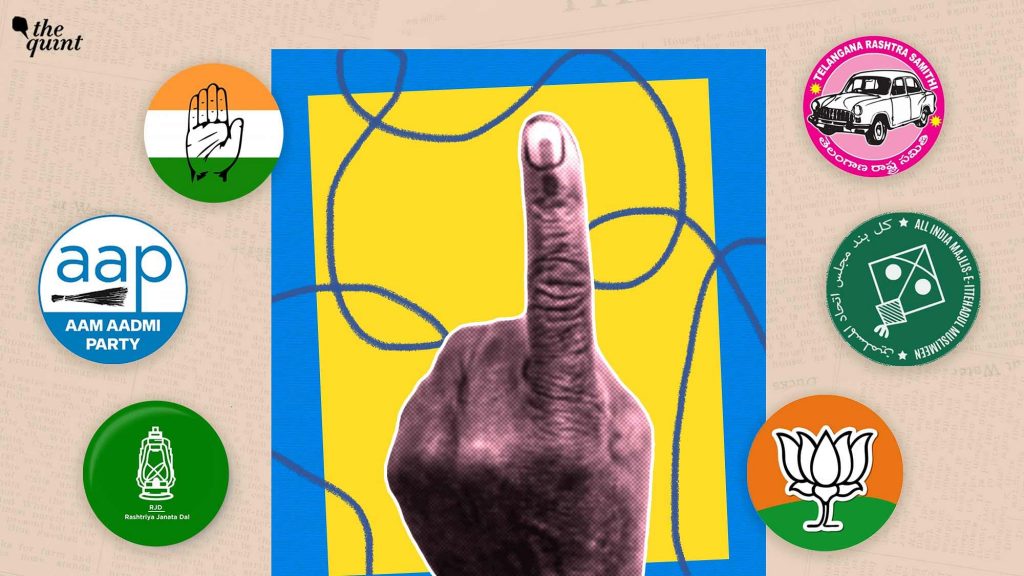 The myth that Narendra Modi is a “strong and charismatic leader” has been severely exposed and smashed. The elections to Gujarat and Himachal assemblies and Municipal Corporation of Delhi along with the by elections to seven assembly seats in states make it unambiguous that the edifice of strong leader built assiduously by the RSS and Modi’s backroom boys has cracked down vertically.

The myth built assiduously, putting huge efforts, time, energy and massive financial resources, by the RSS and his own backroom boys, miserably failed to project him as the pan Indian leader by ensuring the victory of BJP in Himachal and MCD. His image even did not help BJP to win all the seven by elections held in Bihar, Telangana, UP, Chhattisgarh and Odisha. It is a known fact that the political skill and charisma are usually on test during the elections. The electoral success determines and defines the nature of the political acumen and quality of the leader.

Let us begin with the much talked about the electoral verdict of Himachal. After the rout of the BJP in the election, a section of the BJP leaders are raising their accusing fingers towards factionalism. Is it that this has been the abrupt and sudden development in the state’s politics? Being a highly disciplined party the top leaders should have taken note of the malaise. But they failed. Their failure owes to the fact that they were bereft of the Muslim bashing agenda as the population of the state is overwhelmingly dominated by the Hindus. The second was they did not carry out the development policies. Obviously these two issues provided enough time to the state leaders to take care of their vested interest and indulge in factionalism.

The election campaign provided a distinct and loud message that the local people were frustrated with the internecine factional fight and paying scant attention to the development needs. State was suffering with basic needs and employment. When the entire show of the BJP has been running around the personality and image of Modi, it was his duty to take care of the people’s interest. The myth of being a strong and decisive leader also revolves round the structure of good governance, faster growth and viable and stronger economy.

There is no denying that these elements are completely absent. For many it may sound injudicious to say that Modi is bereft of development notions. He lacks the wisdom of acting independently who could take bold decisions and provide good governance. Look at the style of his functioning. He is least bothered about the wellbeing of the people of the country. There are numerous examples of the failures and retraction of his policies and programmes. His only concern is of winning elections as a win provides the opportunity to the leader to establish him as the most able administration and visionary.

The BJP losing the MCD election ought to be seen in this backdrop. The BJP has been in control of the MCD for15 years. This long duration has in fact provided enough time to the people to judge the performance of the BJP leaders. The worst has been the effort of the BJP and especially Amit Shah to destabilise the Kejriwal government through the lt governor of Delhi. This strengthened the belief of the people that while the BJP was not doing anything precious for the people it was creating hurdles in the way of the government which was trying to perform.

With every passing day Modi gained more political power to win elections and use the government machinery ruthlessly to accomplish its mission. During his rule, it is a known fact, that all the democratic institutions have been made weak and dysfunctional. With this the ability to provide an efficient administration has declined sharply.

The decline in the image and charisma also owes to the fact that the strong band of blind bhakts (followers) which Modi has built during these long nine years has started cracking. The electoral victory of Congress in Himachal and AAP in Delhi are testimony to it. His Gandhiphobia is so acute that he even ignores his responsibility towards the people of India. At the victory rally at the BJP head quarter, he once again pit the blame for Congress defeat on dynastic politics. This is indeed bizarre. This is a simple ploy to conceal his failures.

That Modi diktat has lost its power was also manifest in BJP rebels refusing to withdraw their candidature of independent from the electoral arena. As many as 21 BJP rebels contested the polls as Independents and spoilt the party’s image. The party performed worst in under Anurag Thakur’s Lok Sabha constituency. It has shocked many BJP MPs since he is a four-term MP from Hamirpur. Thakur had hit national and international headlines for his nasty chant “Desh ke gaddaron ko, goli maaro saalon ko (Those who have been traitors to the nation, shoot them dead)”. The slogan was aimed at anti-Citizenship Amendment Act protesters. In Modi’s BJP here presents a dynast; son of former Himachal Pradesh chief minister Prem Kumar Dhumal, a BJP stalwart pushed to the margins after the 2017 Assembly polls.

In the background of his being the only authority to exercise power, whose words are virtually the law, who sets the agenda and decides the mode of development, when nobody has the right to question his decisions it is beyond comprehension thatwhy he proved to be failure in giving a growth oriented boost to the governance and economy.

Like his earlier speeches, at the BJP head quarter rally too, citing the party’s victory in Gujarat he said the support to BJP showed people’s anger against dynasty rule and corruption. He even said that people voted for BJP as it is taking all facilities to the poor and middle class at the earliest. But this is not true reflection of the prevailing ground realities. The people are groaning under the burden of lack of development, inflation and unemployment. The figure of people living below the poverty line has not improved. Moreover if the people were really satisfied with the performance of the double engine government, Modi not have to undertake the rigorous exercise of addressing around 51 election rallies and organise 7 road shows in his home state.

A look at the percentage of the vote secured by the BJP, AAP and Congress exposed the myth of public support. BJP got 2 per cent more vote than it has got in 2017, but the number of seats it won shot to 156 from previous 99. The Congress lost around 17 per cent of its vote share. Interestingly AAP got 13 percent. There is no doubt that AAP succeeded in its mission to ensure the victory of BJP. AAP has been the major factor for defeat of Congress in at least 39 seats.

No doubt during its 27 years stay in power in Gujarat, the BJP has completely communalised the people. But more than this the people are virtually scared of the wrath of the BJP leaders. The memories of the pogrom and encounters are still fresh in their minds. The incident of collapse of the Morbi bridge has simply shaken their confidence in the administration. They cannot hope to get patronage of the administration.

It is debatable whether the outcome of Gujarat election has been a boost for Modi’s popularity for the national elections slated to be held in 2024 it is certain that it would prove to the enhancing signin the acceptability of the Congress and other opposition parties. Modi must not think that that Gujarat would prove to be the springboard for elections to Karnataka, Rajasthan, Chhattisgarh, and Madhya Pradesh in 2023. Congress has taken Himachal from the teeth of BJP. This was the first victory of the Congress in the last four years in the assembly elections.

Baring gain of one seat each in UP and Bihar, the BJP has failed to win by elections in other states. While its victory in Rampur in UP is suspect, it owes its one seat win in Bihar to Nishad’s party. A closer look at the Modi’s projecting Gujarat’s victory will make it clear that he wanted to present Bharat Jodo Yatra in poor light. The only message he intends to convey that the Yatra has failed to rejuvenate the Congress, enthuse the cadres and attract the attention of the people.

Notwithstanding Modi eulogising the Gujarat gains, the fact is the BJP leadership is sacred of the 2024 scene. The leade5ship is plagued with the lingering apprehension that it may find it difficult to come back to the power. In the backdrop of this uneasiness the iron man of the party, Amit Shah has already the set the election machinery in process. He convened a high level meeting of the leaders on December 8, coinciding with the announcement of the Gujarat result to formulate the strategy. The meeting identified 144 seats for special focus which they lost in 2019 elections. They worked out the strategy on how to retrieve many of these losing seats. This is certainly sign of desperation. They do not intend to lose out.

The current plight of the BJP is the creation of Modi. He has been so obsessed with his image and perception that hehas forgotten the ground rules. In a way it would be appropriate to say he has been his own enemy. It is also coincident that his decline started with rise of Rahul Gandhi. His Bharat Jodo Yatra besides arousing the conscience of the people to raise their voice against the wrong priorities of the Modi government has projected him as the prime challenger to Prime Minister. (IPA Service)