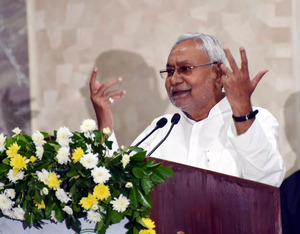 Five MLAs from Nitish Kumar’s JD(U) joined the ruling BJP in Manipur on Friday, a statement said. The statement issued by Manipur Assembly Secretary K Meghajit Singh said that the Speaker was pleased to accept the merger of five JD(U) MLAs with the BJP under the tenth schedule of the Constitution.

The move comes weeks after JD(U) broke its alliance with the BJP in Bihar, for the second time in nine years.

The JD(U) had won six of the 38 constituencies it had contested in the assembly elections held in March this year.

The JD(U) MLAs who joined the BJP are Kh Joykishan, N Sanate, Md Achab Uddin, former DGP L M Khaute and Thangjam Arunkumar. Khaute and Arunkumar had previously sought to contest the assembly polls on BJP tickets but joined the JD(U) after being denied candidature by the saffron party.

The only legislator who did not join the BJP is Mohammed Nasir, who was elected from the Lilong constituency.

Recently, the lone JD(U) MLA in Arunachal Pradesh, Techi Kaso, also joined the ruling BJP. The JD(U) had bagged seven of the 15 seats it had contested in the 2019 assembly elections, and emerged as the second-largest party in the state after the BJP, which had won 41 seats.