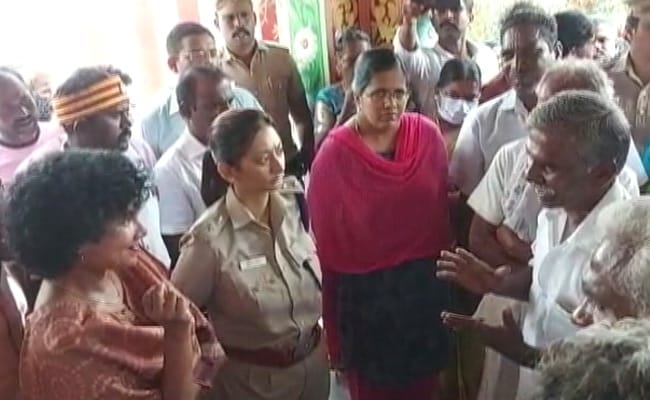 A shocking case of caste discrimination has surfaced from a village in Tamil Nadu, the home of Periyar movement, where human feces were found dumped in a water tank meant for the Scheduled Caste community.

The district authorities who went to investigate, found the horrors did not end there. The village still practices untouchability — to the extent that the local tea shop has a two-glass system and the Dalits are not allowed in temple premises. The BJP is sending a team to investigate tomorrow.

Pudukottai collector Kavitha Ramu and district police chief Vandita Pandey visited the Irayur village in central Tamil Nadu on Tuesday after complaints that a huge quantity of human waste was found in a 10,000-litre water tank that was supplying drinking water to the Dalit community of around 100 people.

Villagers said in recent days, many of their children had fallen ill. After doctors suggested that the drinking water source could be causing the problem, some young men climbed the tank and checked inside.

It is not yet clear who is responsible. The fence around the water tank had been opened in the last few days. “When the young men climbed the tank, they found the lid open… No one has reported seeing anyone climb and dump the waste into the water tank,” collector Kavitha Ramu told NDTV.

Locals say caste discrimination runs deep in the area. For three generations, they had never been allowed into the village temple. The village tea shop still has a different set of glasses for the Scheduled Castes.

The Collector and the chief of the district police went to check for themselves and a case was filed against the tea shop owner. The two also took the entire Scheduled Caste community to the village temple and asked them to identify the persons who stopped them from entering the premises.

A prayer ritual was in progress at the time. Suddenly, a woman belonging to the so-called upper castes, apparently in a trance, declared that she was possessed by the deity who does not want the lower caste people in the temple. The police have filed a case against her as well.

Sindhuja, who holds a BSc degree in mathematics, said she had never entered the temple premises in her 22 years of growing up in the village. “For three generations, we have not been allowed inside the temple. That the collector today took us inside is a matter of great happiness for us. This right should continue and not just here, but every place that wants to keep us out,” she said.

The 22-year-old says they are willing not just to pay taxes but also contribute to the upkeep and maintenance of the temple. “We are not less in any way and want to be treated as such,” he said.

Another resident, Lata, said since she married and came to the village, she had never entered the temple either. ​”For the first time, I went inside and saw what the god looks like in this temple. So, we are very happy. But this should continue. It should not be just for today.”

Nearly a hundred years ago, long before Independence, Ramasamy Periyar had started the temple entry protests in the state. It also inspired the Dravidian movement – a philosophy that still dominates politics in the state, which makes the casteist backlash all the more shocking.

The collector said no immediate trigger for the sudden caste tension had come to light so far.