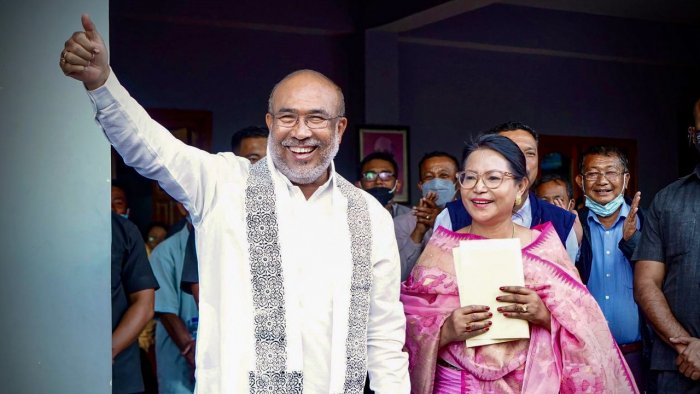 Every time a section of leading intellectuals, eminent journalists and political analysts try to propagate that the Bharatiya Janata Party’s domination is a past, the saffron party gives a response by winning states with huge mandates. The saffron party’s scripting history both in Uttar Pradesh and Uttarakhand has been repeatedly said by the national media. That is undoubtedly true. But what was ignored mostly in the national media was that the BJP has scripted another history in the northeastern state of Manipur.

The voters of the state are known for giving fractured verdicts. The electoral history of the state says that the voters don’t give easily the required magic number of 31 to any political party. Since Manipur became a state in 1972, the only time a party got a majority was in the 2012 assembly elections when the Congress under the leadership of the then chief minister Okram Ibobi Singh stormed back to power by securing 42 seats. In the 1984 and 2007 legislative elections, the grand old party came close to achieving the majority but both times it got 30 seats and fell short of the majority on its own by 1.

In a state like Manipur where even the Congress, which otherwise has ruled this northeastern state for most of the time, struggled to gain a majority on its own, the BJP contesting alone and crossing the majority mark by grabbing 32 seats is a big achievement for the saffron party. Remember that it has been often said by political pundits that the state of Manipur and the northeastern region is unsuitable for BJP! That punditry has been proved false by the historic mandate that the saffron party got this time in Manipur.

The BJP has garnered a vote share of 37.83% — an increase of 1.55% votes in comparison to the 2017 elections. On the other hand, the grand old party has got only 5 seats with a vote share of 16.83% — a decrease of 18.28 votes. Apart from the Congress, its ally the Communist Party of India too performed disastrously. Although the Left party failed to win any seat in the 2012 and 2017 assembly elections, it didn’t perform as badly as this time. CPI contested only two seats — Kakching and Khurai. In both these constituencies, the Left party secured less than 3% votes. In Kakching, it was in a friendly fight with its ally Congress, clearly showing how the bonding of the two allies of the so-called alliance called the Manipur Progressive Secular Alliance! To be fair, this was not unexpected as CPI completely surrendered itself to Congress causing dissatisfaction among the Left workers and supporters of the state.

Even the Bihar based Janata Dal (United) of Nitish Kumar has bagged more seats than the Congress. Nitish’s party has won 6 seats with a vote share of 10.77%. This is the best performance of JD(U) in the state. Barring this election, the only election when the party had registered its presence in the northeastern state was in the 2000 assembly election. The party then had won a single seat and the candidate was N. Zatawn, who won from the Singhat (ST) assembly constituency. Importantly, this is the second time that JD(U) has performed well in the region. In the 2019 assembly polls of Arunachal Pradesh, the party had won 7 seats — more than the 4 seats secured by Congress — with a vote share of 9.88%. Later 6 MLAs of the party joined the BJP and JD(U) presently is left with only 1 MLA. In the case of Manipur too, it remains to be seen whether the JD(U) is able to keep its flock together.

The northeast region has been in focus for a long time for the Rashtriya Swayamsevak Sangh, BJP’s ideological parent, and its Sangh affiliates. With the BJP coming to power at the Centre in 2014, RSS got a big boost and has been quite successful in penetrating the deep parts of the region. Manipur is no exception where RSS and its affiliates have been gaining a foothold through the Ekal Vidyalayas, non-formal schools in rural areas where the emphasis is given on holistic teaching, including Hindu prayers and nationalism. With BJP returning to power this time, that too with a full majority, the RSS and its affiliates are likely to increase their groundwork.

The return of the BJP to power in Manipur is politically significant for the northeast region. The region will see three more states — Tripura, Meghalaya and Nagaland — going to assembly polls early next year. Later, another northeastern state Mizoram will also see assembly polls. The historic saffron victory of Manipur is likely to have its effects on these states. This victory once again shows that the saffron party is no more an “outsider” in the region. It also shows that the acceptability of prime minister Narendra Modi has been on the rise in the region, where the Congress has been continuously declining.

In addition to the saffron victory in Manipur, the massive victory of BJP in Uttar Pradesh has also made it clear that the road for 2024 is comfortable for the saffron party. After BJP’s West Bengal setback, many in the northeast too thought that the saffron’s ground had started weakening. But the huge saffron victory in Uttar Pradesh has, undoubtedly, altered that perception and once again confirmed the key message of 2019’s verdict that the BJP is now in a pole position in the nation’s political scenario. As a result, those regional parties of the northeast which were thinking to distance themselves from BJP are likely to have a rethought. The regional parties of the region are less likely to have bitter relations with the BJP, which is now in a stronger position than the beleaguered Congress or any other party or combination like the Third Front for the 2024 Lok Sabha elections.  (IPA Service)