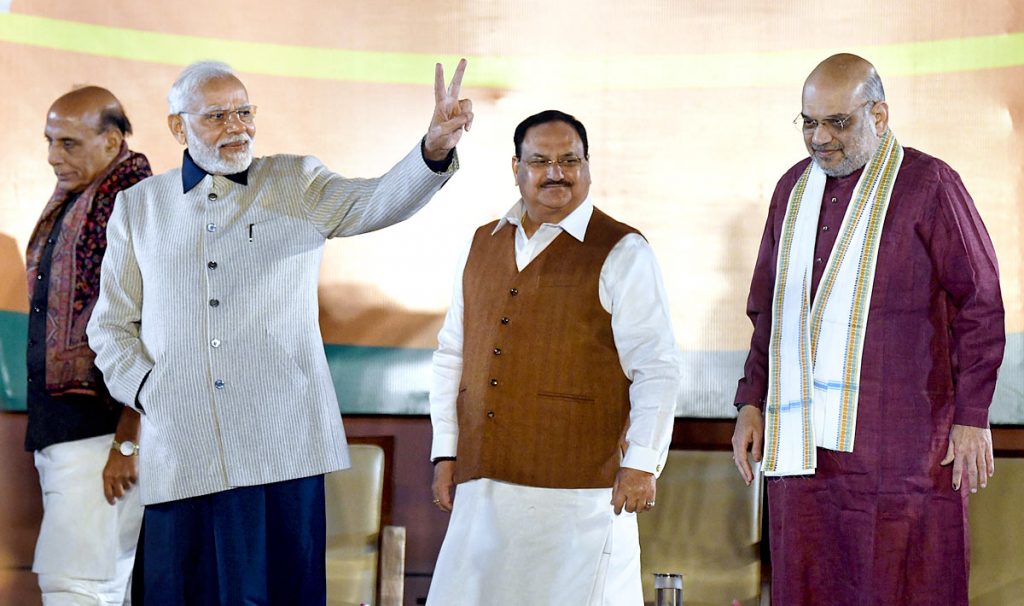 Prime Minister Narendra Modi has led the BJP to a massive victory in his home state Gujarat in the latest assembly elections. The Congress has faced its worst disaster in the state of Mahatma Gandhi in 2022 polls. Certainly, there are reasons for the BJP to rejoice but the way the BJP leaders including the PM as also the national media are projecting the results as the end of the Congress and possible sweep of the BJP in the 2024 Lok Sabha polls, lacks basis.

In fact, the lessons from the latest two assembly elections and the MCD polls are that the BJP, despite all the campaign by its top leaders including the Prime Minister and mobilisation of massive resources, has lost in Delhi at the hands of the AAP and in Himachal by the Congress. Gujarat was already with the BJP and no Congress leader thought that the Party would be able to defeat BJP in Gujarat this time. The Congress was in a mess in the state in terms of organisation. There was little central help and Rahul Gandhi virtually skipped Gujarat campaign excepting one day. Yes, the big erosion of Congress votes in the assembly elections is a cause for worry for the Congress leadership but Gujarat is a different case, it can  not be compared with the other states of India excepting Uttar Pradesh which is also witnessing the success of Hindutva experiment.

That way, the Himachal results are far more significant. The Congress has got back a hindi speaking state. This was the first victory of the Congress in the last four years in the assembly elections. The victory was achieved despite massive propaganda and central backing to the BJP campaign by announcing a number of mega projects before the elections. It was really creditable for the Himachal Congress leaders that they did withstand the Modi juggernaut and extract win. The central leaders excepting Priyanka Gandhi rarely took part in the. campaign. This Himachal win is a positive sign for the Congress in its fight against the BJP in the state assembly elections in Madhya Pradesh, Rajasthan and Chhattisgarh and take the battle forward to the Lok Sabha elections in 2024.

Now what is the signals given by 2022’s last assembly elections to the opposition parties as also to the BJP? There is a positive development that both Trinamool and AAP joined the strategy meeting in Parliament this week called by the Congress leader MallikarjunKharge. For a long time, these two parties were avoiding meetings convened by the Congress as the largest opposition party. Now this joining means that these two parties have some rethinking that for fighting the BJP and the Modi Government at the national plane, an understanding with the Congress is necessary.

The most important thing for the opposition parties   following the   latest    assembly   poll results is that there should not   be   any third front, there will be only one   anti BJP front and that will include Congress. But this does not mean any electoral front. The anti-BJP electoral front will vary from state to state depending on the respective strength of the anti-BJP parties   and    the   ground reality.The political reality in the states is so varied that any talk of total joint front of the opposition against the BJP in 2024 polls, will only spoil the efforts of minimum achievable unity before or   after   the polls.

Rahul Gandhi is going ahead with his Bharat Jodo Yatra which has entered its fourth month. Another nearly two months will be taken by the Yatra which is supposed to end in the first week of February next year. Rahul s looking at the Yatra as the part of a long term ideol0gical battle against the RSS without bothering much about the electoral gains in short term. The Gujarat elections results have not disturbed his understanding, he is thinking of the long term impact of Yatra when more and more non politically attached people will opt for the ideals   of Congress. If that takes place, that will   be   good for the opposition as a whole as still now, the Congress is the main political party taking on the BJP electorally in most number of states.

The success of Bharat Jodo Yatra should not lead the Congress leaders to constantly talk of projecting Rahul Gandhi as the Prime Minister candidate in 2024 polls. The important point is that there is no need for projecting any opposition leader as the Prime Minister candidate before the polls and the common minimum programme also can be drawn up after the 2024 poll results are out. The issues concerning PM candidate and CMP will be relevant only if the opposition wins or there is a hung Parliament. If the BJP and its allies get majority again, all such exercises before the polls, will be futile.

It is no coincidence that the BJP high command under Home Minister Amit Shah discussed the plan of action for 2024 Lok Sabha polls on December 8 itself after the declaration of the assembly election result. They identified 144 seats for special focus which they lost in 2019 elections. They worked out the strategy on how to retrieve many of these losing seats. BJP is in a back foot because it has lost most of its powerful allies in the Hindi-speaking states. Especially, the loss of JD(U) and the SAD has given a big jolt to the saffrons electorally. BJP’s strategy is to keep the losses from its existing 303 seats at minimum and make up this loss from the gains from last year’s losing seats. But this BJP strategy can be ably challenged by the opposition parties if they move with a flexible electoral strategy from state to state ensuring maximum mobilisation of anti-BJP votes in favour of the strongest opposition candidates in that state.

For opposition it will be wise for it to ensure that the strongest anti BJP opposition party in each state, will be the decider of the nature of alliance in that state to take on the BJP. As of now, there are no problems in Bihar and Tamil Nadu. The opposition fronts are model front taking most of the anti-BJP parties. Such fronts cannot be repeated in other states. The Congress is the major opposition party in Madhya Pradesh, Rajasthan, Chhattisgarh, Himachal and Gujarat and it will have the main responsibility to fight BJP in these states. If the Congress feels it necessary to have alliance with smaller anti-BJP parties, its decision will be final.

In Karnataka, the Congress is the major opposition party but the JD(S) has good influence in some districts. It will be in the best interests of opposition unity if the Congress and JD(S) work together to take on BJP both in state assembly polls in 2023 and the Lok Sabha elections in 2024. Similarly in Jharkhand and Maharashtra, the Congress is an active part of the alliances and the party can fight BJP only through these alliances.

In Assam also, the Congress is the main opposition party and it will be in the best interests of the opposition if there is a total alliance against the BJP comprising Congress, Trinamool and the other anti BJP regional parties as also the left. The defeat of the BJP is possible if such composite combination emerges in Assam.. For the opposition as a whole, the losing of BJP in 2024 Lok Sabha polls is of crucial importance since this defeat will lead to the collapse of the BJP control of other North Eastern states.

In West Bengal and Kerala, the political scenario is very clear. In Bengal, Trinamool Congress led by Mamata Banerjee is sufficiently strong enough to take on BJP on its own. There is no question of any total anti-BJP alliance in Bengal. That is not possible and desirable also. In Kerala, the Left Democratic Front will fight the Congress led UDF and whoever wins, belongs to the anti-BJP combination. However, there are new elements in Punjab political situation with the massive victory of the AAP in the last assembly elections. So for the coming Lok Sabha polls, AAP will be contesting all the 13 seats on its own and that might lead to some Congress losses.

Presently TRS led by K Chandrasekhar Rao is firmly with the anti-BJP opposition. He is even reconciled now to the idea of having the Congress as an ally in the anti-BJP opposition. But in Telangana, TRS will fight the Lok Sabha polls on its own against both the BJP and the Congress. Similarly in Andhra Pradesh, YSRCP led by Jagan Mohan Reddy will fight both the Congress and the BJP. There is a possibility of BJP aligning with the TDP led by Chandrababu Naidu in the Lok Sabha polls. In Odisha, the BJD led by Naveen Patnaik will fight both the BJP and the Congress in the polls to maintain BJD’s regional domain.

In fact post 2024 Lok Sabha polls, the developments might have some similarities with the post 1996 Lok Sabha poll scenario. But there will be a crucial difference. Before 1996 elections, the opposition parties fought as being anti-BJP and anti-Congress. The united front government was formed by the non-Congress parties keeping the Congress outside as a supporting party . In post 2024 Lok Sabha situation, it is possible that the Congress will be a very important part of the Government of the opposition, if BJP is defeated.

For Congress to bid for Prime Minister position of the opposition alliance, the decision will depend on the number of seats it gets as also its acceptability by other parties of the opposition  Congress has   to   get minimum 100 to 120 seats in 2024 Lok Sabha as against  its 2019 tally of 52. Apart, there is another crucial factor, if there is a hung Lok Sabha and the need for seeking support of the fence sitters like BJD and YSRCP becomes urgent, then their choice of future PM will also have a bearing on the selection of final PM candidate. The non BJP political parties may fight among themselves in the states in assembly elections, as also in Parliamentary elections, but in post 2024 elections, it has to be ensured that common understanding is arrived at about a non BJP government, in case the BJP loses. The political path for the next sixteen months before the Lok Sabha elections will, have to be travelled with strong common sense and vision by the opposition parties, if they are really serious to unseat Narendra Modi as PM, (IPA Service)