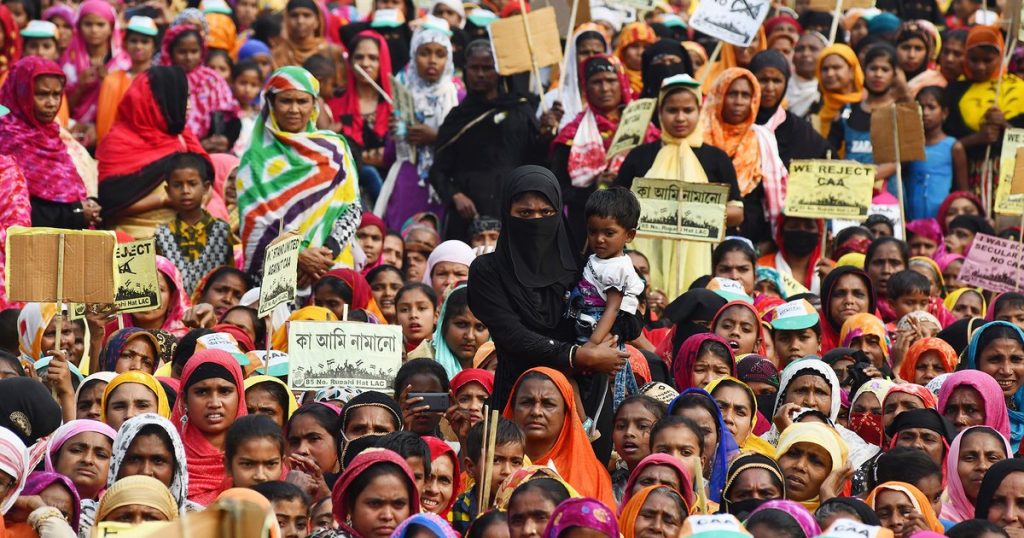 Saffron Majoritarian politics has finally succeeded in achieving its mission of forcing the Muslims to withdraw from the mainstream life and go back to ruts. This is clearly manifest in the manner Muslims celebrated their greatest festival Eid this year. Diktat was issued by the BJP governments to perform namaz inside their houses. In one stroke the saffron rulers reduced a collective celebration into an insulated performance. The Muslims showed their perseverance by not making diktat a big issue.

This feat of the Muslim community reflects two things; either they have become scared of the growing Hindutva power or second, they are sure that this threat and hate politics would pass soon without hurting them. It is also noticed that this time the business establishments and houses owned by Muslims did not use the word Eid on the greetings and even the sign boards. The removal of the word ‘Eid’ from greetings and offers must be read in the larger Hindutva context.

Rightist forces through out the world have launched aggressive hate politics against the Muslims. This was the key rightist agenda in the recently held presidential election in France. The main problem that the right b wing force is to get the peoples’ acceptance of being the more credible and socially respectable organisation. But they are not willing to do it at the cost of losing their identity of preachers of hate politics. The defeat of the politics of polarisation and hatred in the recent presidential elections in France is quite significant and denotes that people are yet to take their words granted. People are still to repose their faith in the rightist politics. Macron’s centrist and pragmatic brand of politics holds lessons for India. He has refused to let the extremist right-wing forces hijack French politics.

India is under the grip of right wing political party for last eight years. Their rule has completely shattered the democratic character of the country. Though Muslims have been at the target of the rightist force, the Hindus are also facing the wrath of the rightist party. No doubt the country is going through a difficult period with minorities facing the wrath of the Hindutva politics unleashed by the BJP and its ideological mentor RSS. Though the Prime Minister Narendra Modi gives the impression that he is liberal and agile to the needs of the people, in reality he has been a diehard rightist who does not have any respect for liberal and democratic values.

The Modi government has been packing the important posts and offices with rightist supporters. This is yet another reason that more and more urban middle class Hindu youths have been joining the saffron brigade. They aspire to get a good position if they force the authorities to implemented rightist policies. An insight into their activities would make it clear that whether it is the act of lynching or framing the centrist and liberal people into false cases with the help of the police, all is aimed at getting patronage and good offices with the blessings of the government. Incidentally Modi does not condemn such actions of the saffron cadres. Instead he has been deploying the police and judicial officials who could espouse the RSS and BJP cause. Once this degradation of democracy has been set in motion, it is a steep and slippery slope from illiberal democracy to outright authoritarianism.

The rise of illiberal politician who spreads politics of hate and party which has no faith in democracy and the decline in support for democracy—particularly in younger democracies—represents a major crisis for the country and its people. These politicians and parties are more prone to violence and war and are more likely to stoke crises and confrontation. The eight years of RSS-BJP rule has witnessed steady rise in religious conservatives to the helm of political power and massive growth of the politics of hate and polarisation on communal line.

It is a sad commentary that people of the democracies are electing right-wing governments to support propaganda that secular and centrist forces have betrayed the nationalist spirit and culture of the country. In India the RSS has managed to win a major section of the urban middle class to its fold, notwithstanding the fact that this section has been worst sufferer of the policies and programmes of the Modi government. Though India under Modi has the highest number of unemployed youths, around 43 crores, this is not deterring these people from supporting Modi and BJP. They have made to understand that their economic condition would further suffer with the rise of the new liberal and educated Muslims. To check this the Muslims ought to be terrorised and made to retreat. A poor and illiterate Muslim would not hamper the interest of the Hindus.

In Denmark while addressing the Indians there on May 3, Modi claimed that he has been able to keep his commitment made to the people. But the fact is an open secret. Even a poor layman knows it well that he has not. His all commitments have turned to be mere jumlas. This was even confessed by his protege Amit Shah. Indian rightists and religious nationalists blame the past secular governments for their indifference to matters of religion, and also for their active toleration of an ideology of multiculturalism that welcomes and supports the ethnic and religious diversity of a society.

Starting in the mid-2010s, democracies all over the world have turned toward the right, electing representatives that stand in stark contrast to those that pushed for globalization and international cooperation two decades earlier. Right-wing populism isn’t a monolith. With the rise of rightist politics, the world has noticed growth in chauvinism. Strange enough the right-wing populism has spread fast. During the last ten years these right wing forces have made their presence. Among the world’s democracies, a growing number has embraced right-wing populism, and either have governments led by populist parties, or supported by them:

Right wing politics is not simply politics, instead it is a form of capitalism which is the modern religion. The RSS cadres have been striving to eliminate the Muslims from this new mode of capitalist market. This year communal clashes which took place in many states ought to be seen in this perspective. Eid has always secured a space in capitalist parlance. No commercial enterprise would like to lose Muslim consumers who drain their year’s savings during this occasion. The Hindu fundamentalists conspired to make them suffer. Major shopping complexes like V Mart, Citi Style, Style Bazaar, M Bazaar and Kolkata Bazaar which used to put up banners saying ‘Eid Mubarak’ refrained from putting the word Eid on their banners.

The primary mission of the RSS and BJP has been depriving the Muslims of economic gains and benefits. The BJP in Karnataka has justified the restrictions on Muslim traders at temple fairs. In Karnataka, annual local fairs are held in temples, dargahs called Urus, and also churches in most rural areas. They are a representation of local culture and folklore. These fairs are documented in ancient scriptures as well. Thousands of fairs are held in the rural Karnataka. Some of them were started by Muslims. The temple fair at Bappanadu is celebrated both by Hindus and Muslims for several generations. This year Muslim vendors stayed away from the temple festival. It is said that Shree Durgaparameshwari Temple, also known as the Bappanadu Shree Durgaparameshwari Temple was built with the contribution of a Muslim merchant. (IPA Service)

Raj’s War Against His Cousin Uddhav Is Leading To Turmoil In Maharashtra
Posting....