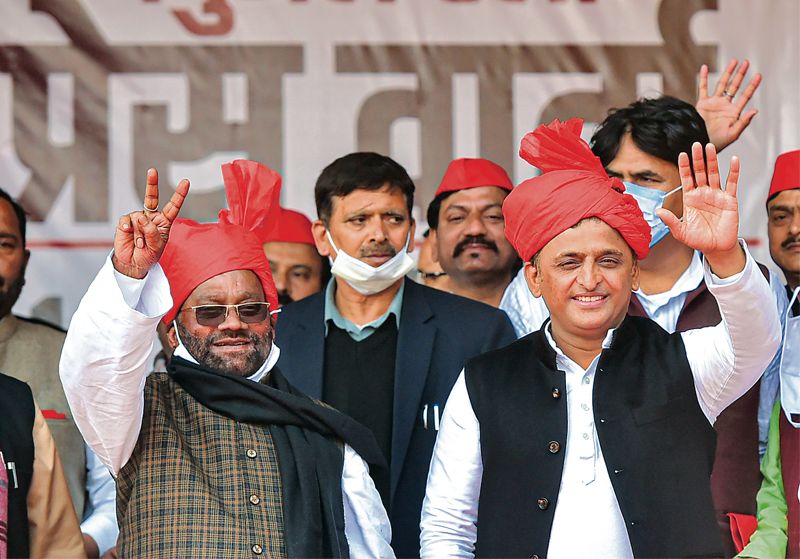 Kairana Mission of BJP top leaders Narendra Modi and Amit Shah has failed to yield the desired result of polarisation of Hindu and Muslim. The back ground materials and the action paper which the saffron think tank and top intellectuals had prepared after putting nearly a month of untiring and sustained effort could not help these two leaders.

The two leaders would not have imagined in their dreams that, in the words of Yogi Aditynatath 80 perception population obviously implying the Hindus would boycott their call. Their efforts to reach out to the Hindus of Muzaffarnagar and develop split the Hindu Muslim unity could not materialise.

Amit Shah’s Chanakya acumen and his expertise to handles the criminals would  not materialise. Shah was the first leader to move around used his resources and acumen. But could not succeed. This appeared to be more like a guided tour. With general Hindus preferring to stay away from him, it was left to the party cadres to take him to the areas dominated by the workers and party cadres and make him meet the Hindus suffered due to 2013 exodus.

This year too, Shah and the RSS-BJP cadres have made “Hindu exodus” the main issue. However, a thorough probe found that the BJP claim was exaggerated and false. RSS has succeeded in confusion and carried away the communal feelings in 2013, but this time it is not going to be repeated. The Hindus have come to realise the nasty communal game BJP is getting ready to enact. It is also pointed that Muslims too have immense. But their losses was not synchronised properly. Muslim leaders Asaduddin Owaisi in 2016 had claimed that at least 50,000 Muslims migrated after the 2013 Muzaffarnagar riots.

During a door-to-door campaign in UP’s Kairana last week, Shah had visited families said to have been affected by the alleged exodus of Hindus from the area in 2017 owing to communal violence. The Home Minister had claimed their return was made possible by the improved law and order situation under the Yogi Adityanath government in the state.

The BJP is back with the issues – exodus, Hindutva and Muslim aspiring to have a major say – that are the prime sources of stoking fear and prejudice among the Hindus against Muslims with more ferocity. There is evidence to suggest that Prime Minister Narendra Modi, with the help of his trusted lieutenant Union home minister Amit Shah, has worked consistently to increase and utilise the prejudice of the majority communities against minorities. Shah had been to Kairana on January 22, to carry out a door-to-door campaign for his party. It has a sizeable Muslim population, but Shah intentionally avoided the Muslim doors.

It is good that just ahead ten days of the first phase of election which will witness Karana going to poll on January 10, the farmers leaders have become proactive and have started moving around the voters and telling the voters not to vote fore the leaders and parties who opposed their yearlong Satyagrah.

Tikait charged Modi of betraying the farmers. He claimed farmers were going through “troubled times” in Uttar Pradesh as they were getting less value for their produce and forced to pay “exorbitant” electricity bills. He made it categorically clear that voters will favour those talking about farmers; Hindu-Muslim polarisation won’t work.

Tikait also said ‘BJP’s Kairana model won’t work in UP, farmers know whom to vote for’. Rakesh Tikait says farmers will observe 31 Jan as ‘broken promises day’ to protest against Modi govt not yet fulfilling promises to ensure MSP & waive cases against According to Takait farmers will use their rights to vote the BJP since its leaders Modi and Shah have betrayed.

Alleging betrayal by the Centre, Rakesh Tikait speaking at a farmers rally in South India on Sunday had announced a country-wide observance of “Betrayal Day” on Monday over farm issues. The reports reaching underline that is massive success. The national spokesperson of the influential north Indian farmers’ union claimed the over-a-year-long protest at Delhi’s borders was withdrawn on the basis of a letter of promises by the government on December 9 but those remain unfulfilled.

Yet another example of Modi betrayal that Tikait mentioned is around 400 satyagrahis still continue to languish in jail.The Modi government had promised to look into the matter and withdraw the cases. But even after so many months of calling off the satyagrah, no positive move has been met to settle the cases.

Tikait also strongly refuted the reports that BKU has softened its stance against the BJP following Union minister Sanjay Balyan’s meeting with its chief and his brother Naresh Tikait earlier this month. Rakesh Tikait, the secretary of the union, said farmers across India will observe 31 January as ‘Vada Khilafi Day’ (broken promise day) to protest against the Centre not yet fulfilling the promises it had made. The sources close to Tikait say that this nature o0f game of mischief is being played the BJP cell which is known for its notorious plans.

The BJP leaders feel that coinciding with then failed mission of Amit Shah party can experiment with this strategy. This would create confusion among the farmers rank. Nevertheless Tikait claimed that Home Minister Amit Shah’s efforts to “polarise voters” in UP assembly elections by using the “Kairana example” will not succeed, as that model of fighting elections has turned outdated.

As of now, the Kairana-Muzaffarpur region which is going to the polls on February 10 and February 14 is relatively peaceful. The year-long farmers’ stir has played a major role in re-cementing the bond between Hindus and Muslims. Ground reports suggest that the people at large want to forget what happened in 2013-14 and live in peace and harmony.

As the election dates close in, a scramble has developed amongst the political parties, especially among the heavy weight politicians to get the social formula right in the selection of candidates. Already political players like the Bahujan Samaj Party and the All India Majlis-e-Ittehadul Muslimeen have announced a significant number of Muslim candidates. If the experts are to be believed Musalmans have already made up mind to defeat the BJP.

This election will prove many self perceived notion about Muslims wrong. It will not be the identity of the candidates that would motivate the Muslims to vote. Even in a communally-polarised constituency, what matters is local issues of access to public services and amenities.

“The (election) issues are farmers, unemployed youth and inflation for the middle class. But efforts are being made to polarise Hindu-Muslim voters through regular statements on Jinnah and Pakistan. But, this will not work out for those doing it and will instead harm them,” Tikait told In Uttar Pradesh, farmers are going through troubled times. Not only farmers here get less value for their produce, they are also forced to pay exorbitant rates of electricity,” he added. (IPA Service)

Dance And Despair For India In Memory Of Murdered Journalist Gauri Lankesh
Posting....