BJP Is Worried At Likely Impact Of Rahul’s Yatra In Haryana, Kashmir 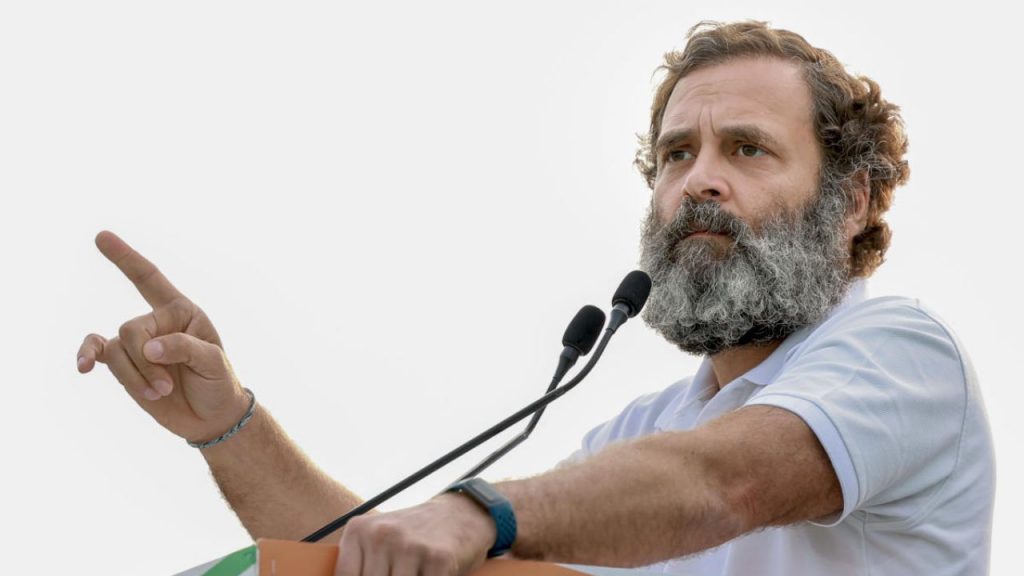 Having failed in its design to malign and create hurdles in the path of Rahul Gandhi’s Bharat Jodo Yatra, Narendra Modi has finally resorted to the strategy of hitting below the belt. As an obedient colleague, the Health Minister Mansukh Mandaviya conveyed the directives of Modi to Gandhi to suspend his Yatra “in the national interest” if he could not be follow the “protocol”.

Mandaviya through his letter to Gandhi tried to create an impression that Modi and his minister were really worried of the alleged resurgence of the dreaded covid 19, but this letter and his subsequent jibe at the Gandhi family that the enormous mass support to the Yatra has frightened Modi to the extent that he even preferred to stake his prestige. His letter has ominous intent is evident from his saying;  “I cannot neglect my duty of stopping potential Covid spread just because one family perhaps believes it’s above the rules… No one is entitled to special treatment.”

The lingering shadow of losing the 2024 Lok Sabha election has been so frightening that  this minister came out with an oblique threat. It is certainly not tough to comprehend that he wrote the letter to Rahul out of frustration at the success of the rally and deep incubation of his vengeance. Lest there was no need to mention the word one family”.  This is the other form of Narendra Modi’s jibe of dynastic politics.

On December 20, the day Yatra was in Rajasthan, Mandaviya in his letter expressed apprehension that people of Rajasthan would get infected with Covid. But on December 21, when the Yatra entered into Haryana, not a single case of Covid was mentioned by the minister in his letter. He wrote “several people” have caught the virus after participating in the yatra and cited Himachal Chief Minister Sukhvinder Singh Sukhu as an example. If the Covid had infected large number of people, why then only Sukhu’s name was cited. In all fairness, Mandaviya should have mentioned the total number of the infected number of people. It would not be astonishing if after the veracity of his assertion being challenged his department now may come out with detail number.

Besides the Yatra hurting the electoral prospect of Modi at 2024Lok Sabha, yet another issue that cajoled the government to take to this step is the unconceivable response of the people of the valley who have been living under the shadow of the state power. The government is not sure how the Kashmiris would react to the situation. If the people of the BJP ruled states, Karnataka, Madhya Pradesh and even Haryana come out on the streets in lakhs, this number may multiply many fold. People coming out on streets would expose the claims of having restored peace and order in the valley and its justifying scrapping of 370, which is being heard in the Supreme Court.

So far the people were restrained from coming to the streets, but this Yatra will provide a much desired opportunity to the local people to ventilate their grievances which would have wider impact on the pan Indian political system and institution.

In his letter Mandaviya wrote: “I request [Rahul Gandhi] that Covid protocol, including use of masks and sanitisers, be strictly followed during the march and only those who are vaccinated be allowed to participate.”  What is most surprising is he has asked the vaccinated yatris, the participants, to carry the certificate, which was even not necessary when the Covid was at its peak. This is indeed a tactics to substantially reduce the number of participants. Obviously a reduced number of participants would not have the desired impact and the BJP and Modi government could get the opportunity to claim that the Yatra was not welcome by the Kashmiri people.

The BJP leadership which has been burning mid night lamp to give a shape to its strategy to prove the Yatra a flop, ever since it started on September 7 from Kanyakumari, would finally get the skewed chance in Kashmir to reiterate its accusations. The quantity and attention the Yatra was getting of the global fraternity about its impact and relevance as the narrative changer would be on test.

Surprisingly the Health Ministry-led expert group later in the day, after Mandaviya shoot off his letter to Gandhi, issued an advisory for use of masks in crowded areas. It’s not binding, though, as the government maintains “there is no need to panic”. Obviously this action implies that before the letter reached Rahul, no Covid protocol was in vogue.

Did Modi, Shah and other BJP leaders wear a mask when they campaigned in Gujarat and went door to door to seek votes in the state? Shockingly he is not perturbed at the Yatras being taken out by BJP in Karnataka and Rajasthan. The Congress spokesperson correctly sought to know; “Has the Health Minister sent a letter to them?” Accusing the BJP of hypocrisy, has said, “We will certainly follow whatever protocol is put in place. India has no mask mandate at present and has removed other restrictions, too, over the past year.”  The chief of the Congress communication, Jairam Ramesh asked the BJP not to play politics on the matter. “I can understand that the BJP is afraid and is in trouble after seeing the success of the Bharat Jodo Yatra,” said Ramesh.

The game of the Modi government is out in the public domain, even before it could make a significant dent. Even the Bihar Chief Minister Nitish Kumar ridiculed Modi government for raising an alarm over a fresh COVID-19 spike at a time when Rahul Gandhi’s Bharat Jodo Yatra was gaining momentum. He said; “It should be known why they (the ruling BJP at the Centre) had become laidback over Covid in the first place, and why they have certainly become vigilant now when the Congress people are taking out a yatra”. Kumar also sought to know; “Why do these people have an objection to that yatra? Why do they themselves keep taking out processions?”

Mandaviya acted on the letter written by three BJP members of Parliament from Rajasthan, P P Chaudhary Nihal Chand and Devji Patel claiming that Covid-19 is spreading in the state due to the Bharat Jodo Yatra. Though they alleged that coronavirus was spreading, they could not site a single example. They alleged that Bharat Jodo Yatra has not been following Covid protocols. These members probably were not aware that curbs have been lifted.

The eminent Supreme Court advocate Prashant Bhushan underlines the ignorance of these members. They in their letter to Mandaviya argued that the Vaccinated will not get and spread Covid and will not get sick. Bhushan pointed out “Now all studies are showing that the Vaccinated are more likely to get Covid and get sick.” He seeks to know; “Will these people be held accountable for fooling & harming us?”

Nevertheless their allegation is akin to the complaints lodged by the saffron vigilantes across the country against the secular, socialist forces and especially against the Muslims. At the complaints of the vigilantes police arrests the alleged offenders and are jailed. These members did not raise the issue of violation of covid protocol even in Parliament. Members of the house are not wearing the masks.  The MPs had requested that Covid protocols, including the use of masks and sanitisers, be strictly followed during the march and only those who are vaccinated be allowed to participate. The MPs also requested the Union minister to ensure that participants are isolated before and after taking part in the march.

One development that sprang out of Wednesday’s meeting of experts and senior officials, chaired by the minister was observation of the review meeting that there was no overall increase in caseload as of now. Of the three cases of the Omicron subvariant BF.7 two were detected in Gujarat where Modi held rallies and road shows and one from Odisha. (IPA Service)

Workforce World Over To Face Great Hardship In 2023