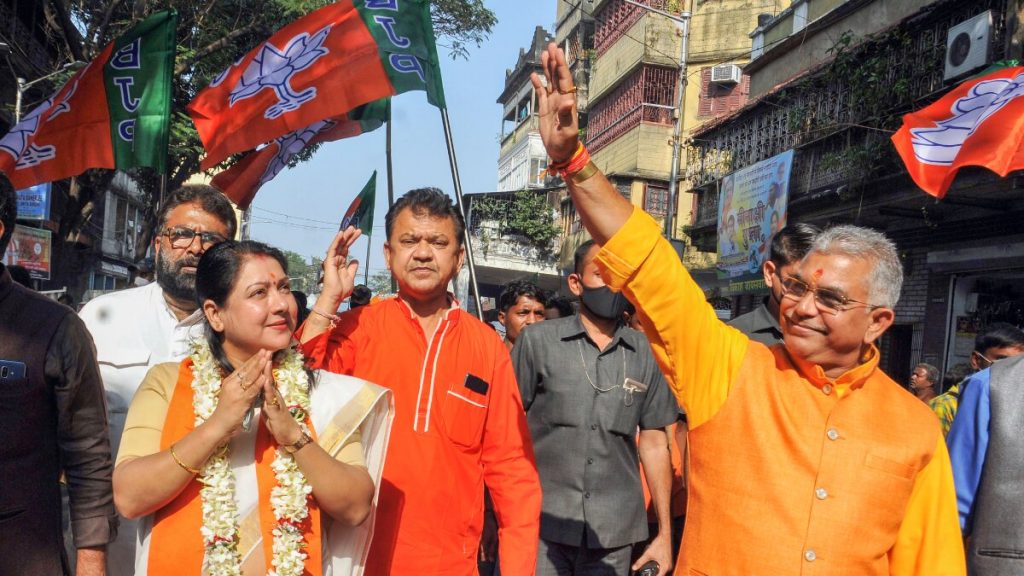 Four major factors have hamstrung the state party’s post-election functioning :these are, (a) a continuing exodus of leadership aspirants/supporters to the ruling Trinamool Congress (TMC); (b) the failure of the factionally divided Bengal unit to craft any effective political initiative ; (c) total indifference of the party’s central leadership towards recent developments in the state and (d) confusing signs suggestive of an unofficial accommodation of interests between the BJP and the TMC at the highest level.

Despite a change at the top in Bengal, with the polished Mr Sukanta Majumdar replacing the often unpredictable Mr Dilip Ghosh as the state President, the BJP’s popular vote share has dropped as sharply as a cliff in recent months. From an all time high of 40% of popular votes in the 2019 Lok Sabha polls, the BJP’s share fell to around 38% in the 2021 Assembly polls— a still respectable figure that led to the party’s winning 77 seats out of 294. It also ensured the BJP’s emergence as the main opposition entity, well ahead of both Congress (INC) and the Left Front (LF).

However, in the recently concluded civic elections and the string of Assembly by-elections, the party’s swift descent towards a terminal decline became ominously clear. In the Kolkata Municipal Corporation (KMC) elections days ago, its vote share fell to only over 12% or so. The much weakened LF narrowly recovered its place as the opposition front runner, winning over 13% of the total votes. Worse, registering its worst performance in some years, the combined opposition failed to put up any kind of effective challenge to the TMC’s surge..

As the erosion among demoralised BJP party cadres at different levels increased, desertions and their desultory march towards the TMC continue unabated. Apart from expressing occasional concern and a hope that ‘genuine’ workers/supporters would not quit in despair, neither Mr Majumdar nor Mr Ghosh, currently the BJP’s National Vice President, have managed to arrest the slide.

TMC Chief Mamata Banerjee using the administrative machinery, has effectively exploited the factionalism within the state BJP. The Bengal/Kolkata police generally act tough against prominent leaders like Mr Suvendu Adhikary or Mr Ghosh whenever they organise rallies/protest marches /meetings etc. Invariably their programmes are stopped by the state administration ,on grounds of violating official Covid-related restrictions .

Contrast this with Chief Minister Banerjee’s recent phone call to Mr Majumdar who went into isolation having tested covid positive. She even sent a rare gift of complimentary fruits for Mr. Majumder wishing him a speedy recovery, in a gesture that stumped observers. Whatever her other attributes, Ms Banerjee, the self proclaimed ‘street fighter’, was never renowned for observing even minimal social behavioural norms while dealing with political opponents! Whatever her motives behind this sudden display of softness, BJP leaders as well as activists are thoroughly confused!

In sharp contrast, there were no fruits/ similar gifts for Mr Ghosh as he led a demonstration at Asansol recently. Once more thwarted by the police from taking out even a small procession or addressing locals, he ended up staging a sit-down protest.

Mr Adhikary, who achieved the rare honour of defeating an incumbent Chief Minister Ms Banerjee in the Assembly polls, has fared no better, in the matter of getting gift packages. As one observer explained, ‘The difference between Mr Majumdar and the Ghosh/Adhikary duo is that the former is yet to announced/launch any major anti TMC agitation in Bengal, although months have passed since the last Assembly polls. On the other hand, Ghosh and Adhikary remain engaged in local level political activity in the districts, still in touch with grassroot workers.’

Ever since the stunning meltdown of the high-pitched anti TMC political campaign by the BJP’s central leadership during the Assembly polls, with its emphasis on Hindutva and Hindu consolidation, no national level leader has deigned to visit Bengal during their party’s present bleak phase. Even the TMC/BJP war of insulting tweets has been conducted half-heartedly.

Most Delhi-based BJP leaders and their followers in Bengal explain that the present quiescent phase does not mean that Bengal has been taken off the political map.. ‘Our immediate priority, everybody understands, is to fight the Assembly elections scheduled in five states , with special emphasis on the major battle in Uttar Pradesh. All else must follow’, says a state leader.

Meanwhile several little signs and gestures from the TMC camp indicate that a truce of sorts could have been worked out with the BJP. It is difficult to ignore their significance given the extremely adverse relations that prevailed between the two parties until recently.

It has been odd to say the least , to see a BJP Central Minister requesting a TMC Rajya Sabha MP (suspended for her allegedly raucous behaviour) to speak first at an official gathering.

Ms Banerjee’s recent comments on issues such as centre/state relations within a federal structure etc have been uncharacteristically dovish, even conciliatory. She spoke of the importance of the centre and states functioning in harmony after her last meeting with Prime Minister Narendra Modi. She acknowledged the Adanis and the Ambanis as major players in the Indian economy, along with the greater Indian farmers’ community. She specially invited Mr Gautam Adani for a one-on-one meeting at the new state Secretariat in Kolkata, sans any visible outcome in terms of fresh industrial investments/ announcements.

It needs stressing, such tweaks in her habitually combative attitude towards the central Government and big industry of late , leave her TMC followers in Bengal as thoroughly puzzled as anyone else.

The BJP’s response has been equally significant, if silent. This is not to suggest that organisations like the Enforcement Directorate (ED) or the Central Bureau of Investigations (CBI) are not autonomous.

But for the last few months much to the disappointment of opposition parties in Bengal, neither organisation seems to be keen on pulling up/proceeding against prominent TMC state Ministers/MPs/MLAs allegedly involved in the massive Sarada chit fund corruption or Narada sting operations. Nor has there been any fresh official initiative to question Mrs Rujira Narula Banerjee (aka Mrs Abhishek Banerjee) in connection with the investigation of the illegal money trail on the massive , multiple rackets in coal and cattle smuggling and sand mining in Bengal.

‘The mystifying silence of the ED and the CBI,’ says an observer ,’ sometimes speaks more loudly about new political equations than the eloquence political leaders in India.’

Be that as it may, so far no one has authoritatively commented on the new emergent trend in Bengal politics yet. BJP old timers have begun expressing their discontent by dropping out from inner party what’s app groups, as their first warning to the party leadership of their mounting discontent. They have also taken care not to join the growing ranks of opportunity sniffers keen to join the TMC.

What seems certain is that the war of words will continue. Never mind fake news, manipulated/photoshopped content and sundry other bane plaguing the lively social media in India, most political leaders whether in the BJP or the TMC, will use it as a legitimate political weapon for some time yet. (IPA Service)

Poll Battle In Manipur Intensifies As BJP Is Desperate To Retain The State
Posting....