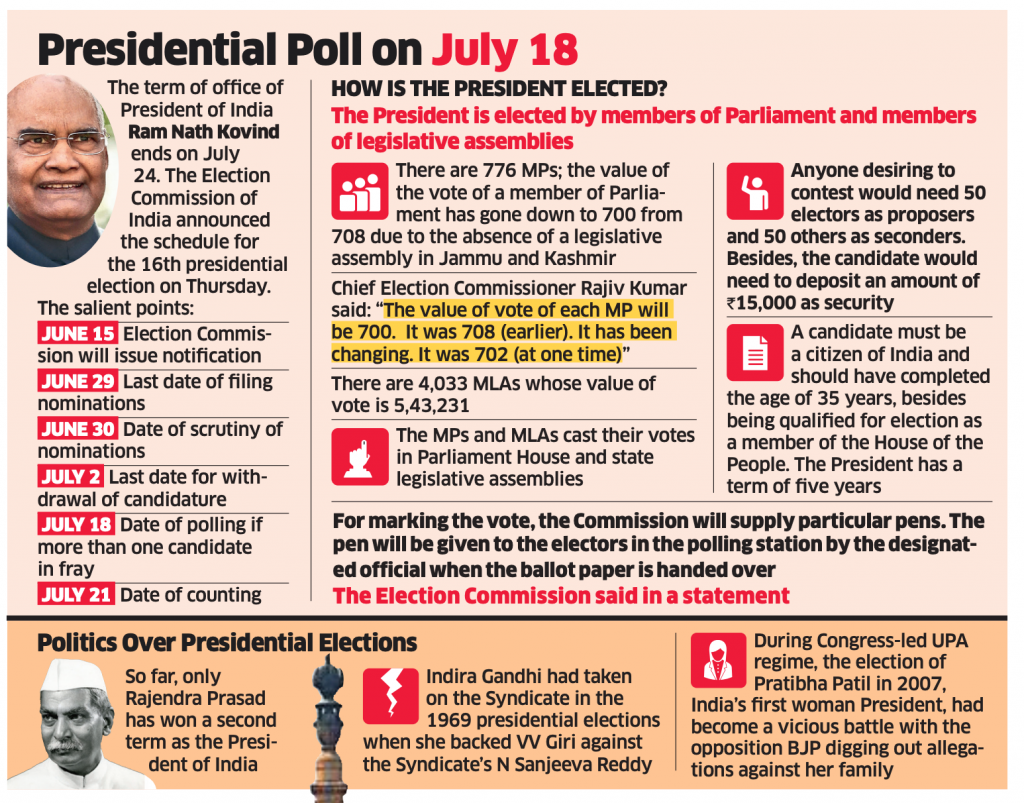 The BJP’s advantage in the forthcoming presidential polls is that it has friends – both overt and covert – in the opposition camp. Their presence not only boosts the party’s own numerical strength, but also sows seeds of doubt and disaffection among its adversaries.

The two overt friends of the BJP, both of whom are quite steadfast in their loyalty, are Naveen Patnaik of the Biju Janata Dal (BJD) of Odisha and Jagan Mohan Reddy of the YSR Congress of Andhra Pradesh. Since they have stood by the BJP during the passage of controversial measures in parliament like the abrogation of Article 370 and the (now withdrawn) farmers’ bill, there is little doubt that they will happily support whoever the BJP names as its presidential candidate.

At a time when the BJP’s relations with its partner in the National Democratic Alliance (NDA) – the Janata Dal (United) in Bihar – is not very stable, the backing which the BJP is receiving from the BJD and the YSR Congress must be a source of considerable satisfaction for it.

Unlike the Janata Dal (United), neither the BJD nor the YSR Congress seems concerned about the impact of their proximity to the BJP on the Muslim vote. The BJP also treads carefully in Andhra Pradesh with regard to issues concerning Christians such as the anti-conversion bill in view of Chief Minister Reddy’s Christian background. The masterful manner in which the BJP either steers clear or presses forward on religious issues in different states cannot but evoke admiration.

Apart from the friendship of the BJD and the YSR Congress, the BJP also has covert connections with parties like the Telangana Rashtra Samithi (TRS) and the Aam Admi Party (AAP). Formally, both are enemies, even stridently so. But, by staying away from the other opposition parties at the national level, as they did during the recent meeting called by West Bengal Chief Minister Mamata Banerjee, the TRS and the AAP can be said to have played the BJP’s game on the question of putting up a united front against the BJP.

The TRS and the AAP have explained that their absence from the meeting of the 17 opposition parties called by Mamata Banerjee was in protest against the Congress’s presence. The two parties apparently regard the Congress (and not the BJP) as their main adversary, presumably because the Congress is the main opponent of the TRS in Telangana, and of the AAP in Delhi, Punjab and elsewhere.

Whatever the explanation, the fact that their anti-Congress stance indirectly helps the BJP is undeniable. It also emphasizes their distance from those parties which attended the recent meeting in New Delhi whose areas of influence extend from Tamil Nadu and Kerala in the south, to Maharashtra in the west, to West Bengal, Bihar and Jharkhand in the east, and to Kashmir in the north. Needless to say, the TRS and the AAP can appear to be more isolated in this context than what they would like to admit.

Ironically, both these parties have been presenting themselves as alternatives to the BJP, with the TRS carrying on an advertisement campaign similar to what Chief Minister Yogi Adityanath used to do before the U.P. assembly elections. The AAP, too, has its chief minister’s face projected at nearly every vantage point in Delhi. These initiatives of the two parties underline their willingness to play a leading role in upstaging the BJP.

Yet, since their aversion to the Congress comes in the way of challenging the BJP along with the other opposition parties, their chances posing a serious threat to the BJP are minimal. For the BJP, this inability cannot but be a matter of relief.

There are two other parties whose position vis-à-vis the BJP is no less ambiguous than that of the TRS and the AAP. They are the Shiromani Akali Dal of Punjab, a currently estranged ally of the BJP, and the Majlis-e-Ittehadul Muslimeen of Andhra Pradesh, which has often been described as the BJP’s “B” team because it tends to cut into the votes of the other parties opposed to the BJP, thereby helping the latter.

Yet, although the leader of this Hyderabad-based party, Asaduddin Owaisi, has been sharply critical of the BJP, the party’s predominantly Muslim base makes the “secular” parties wary of associating with it lest this   alienates the Hindus. The ghost pf Jinnah still haunts the Muslim outfits despite their willingness, as in the case of the Majlis, to come to terms with the secularists. Needless to say, such an attitude bred by the continuing antipathies of the pre-independence days, helps the BJP.

It’s thumbs up, therefore, for the BJP in the presidential polls for the present unless the anger in the Islamic world over the disparaging remarks of the BJP spokespersons on Prophet Mohammed and the street protests on the Agnipath project undermine the BJP’s political position. (IPA Service)

Leftwing Gustavo Petro Is Elected As The New President Of Colombia
Posting....