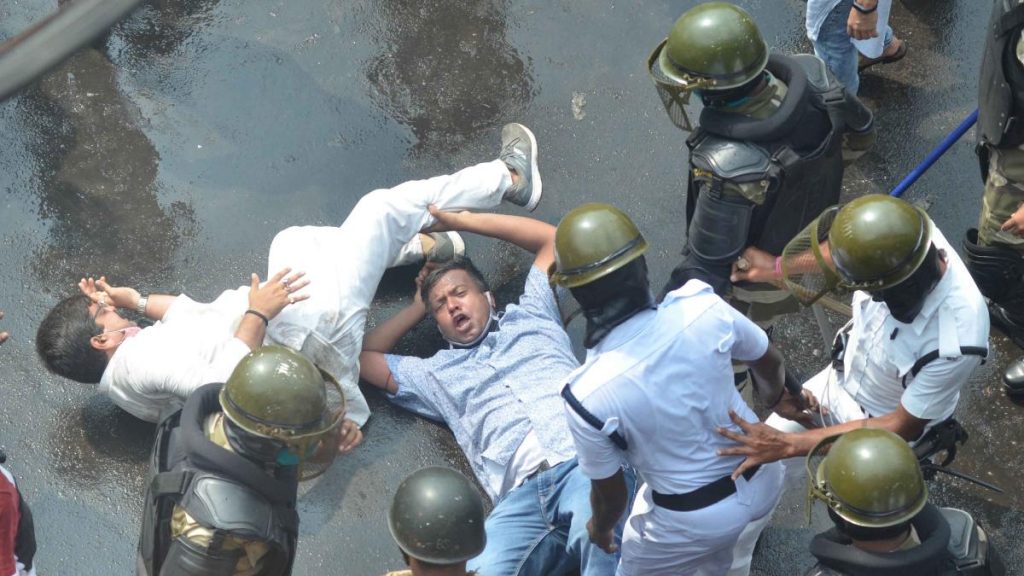 The manner in which the BJP created boisterous situation and its cadres indulged in violence near Nabanna the Bengal Government secretariat on September 13 certainly does not underscore BJP’s effort to stage a comeback, instead it makes explicit that the BJP had contrived a well-designed plan to engineer to wide chaos and violence in the state.

A closer look at the nature of the protest rally against corruption, would make it clear that it was a part of the BJP’s chain to push the country in violence and communal riots. While the party has been wafting Hindu-Muslim issue in other states; Gyanvapi issue in Uttar Pradesh, Nipur Sharma issue in Rajasthan, Peshwa and Maratha issue in Maharashtra, it resorted to igniting violence in Bengal on the pretext of fighting corruption since the party had no Hindi-Muslim issue at the moment.

The Modi-Shah combine has turned sceptical of the future electoral prospect in the wake of Rahul Gandhi’s Bharat Jodo Yatra. The peoples’ response the rally was receiving on its way has further shaken their confidence. Obviously they had become proactive to neutralise Rally’s gains. In their pursuit they can go to any extent. Every action is fair in political war. One need not be astonished if the country witnesses fresh bouts of communal strife in  the coming months   before   Lok  Sabha polls.

Strategist Amit Shah and other top leaders are aware of the crude reality that it was an arduous task to foment communal riot in Bengal for unseating Mamata and her party from power. Obviously in this back drop the only way before them is to drown the state in reckless violence and implement their long cherished scheme of putting the state under President’s rule. While Jagdeep Dhankar, the vice President of India, was the Governor of Bengal a resolute effort was made by some Central ministers and top BJP leaders. But they could not accomplish their mission. They had to drop the move.

With 2024 Lok Sabha election, which is very crucial for the political survival of Narendra Modi, knocking at the door, the think tank and strategists have become restive. Though the BJP leaders tried to give the impression that their Nabanna rally was a massive affair, the fact remained that it fell short of their own expectations and the preparation they had done. They had claimed that nearly 2 lakh people would participate but the real number of participant was not more than 50,000.

Nevertheless they succeeded in implementing their plan to kindle violence. The determination of the party leaders to plunge Calcutta and Howrah in violence was clearly evident on the streets of Calcutta, far away from Nabanna, with the BJP cadres resorting to ruthless violence. They mercilessly beat the police officers of the rank of Assistant Commissioner and burnt their vehicles.  They resorted to this nature of violence on the plea that the police has not allowed them to march towards Nabanna.

A political party enjoys the right to speak against the incumbent government and draw the public attention towards its administrative failures. But what happened on Tuesday in Howrah, is really deplorable. The BJP leadership behind the façade of “Nabanna Abhiyan”, one of its biggest campaigns in recent times, was simply giving a shape to its plan to push the state into chaos.

It was really a pleasant experience to notice how the BJP used the media, government machinery and even judiciary to further its mission. An apolitical common person will testify that the protesters resorted to reckless violence, but the BJP leadership was quick to move the High Court and convince it that the police has used brutal means to stop them from reaching Nabanna.

On its part the High Court justifiably directed the state government to send the detailed report about the rally and the police action which had happened near Nabanna. The High Court on Tuesday sought a report from the West Bengal Home Secretary over the allegation that BJP supporters were forcibly prevented from attending its ‘march to Nabanna’ programme. The report has to be submitted by September 19. A division bench comprising Chief Justice Prakash Shrivastava and Justice R Bharadwaj also directed the state government to ensure protection of the BJP state headquarters in Calcutta. It would have been highly appreciated if the court had looked in the nature of the violence that was unleashed by the BJP workers in the heart of Calcutta.

The bench directed the state authorities to ensure that no unnecessary arrest is made and no person is unnecessarily detained in connection with the rally. The petitioner in his PIL claimed that BJP workers were forcibly prevented from attending rally and party leaders were attacked. In Calcutta the police was attacked by the BJP goons. It is pointed out that the place near Vidyasagar College, where the idol of Ishwar Chandra Vidyasagar was vandalised by the BJP cadres during the year old visit of Amit Shah, witnessed worst nature of violence.

The pictures of the vandals putting a police vehicle on fire and thrashing the police officers is viral. The petition was moved even while the protesters were having scuffle with the police. Obviously it implied that the petitioner was ready with his appeal long before the protesters formally launched their march. Around 20 police officers were injured by stones pelted by BJP workers.

The BJP leaders would not have complained if the Mamata government had allowed them to put the lives of the people to ransom and vandalise the state secretariat. In a situation when the protestors were burning the cars of some common people and attacking the innocent people, how could the police not use force to disperse them? The BJP will undoubtedly refute the contention that its cadres and supporters had gone berserk and indulged in violence. It would have been better in the interest of the state and its people if it has asked the state government to furnish the details of the behaviour of the protesters and their actions while marching towards Nabanna.

BJP insiders nevertheless concede of rally being a poor show. The party had spent around Rs 10 crore on this event. A senior leader said “I wish our leaders had coordinated among themselves and drawn up a proper plan”. It is said that a section of the state leaders are not happy with the agitational plans are being prepared by the central leaders. They did not care to look at the cultural ethos of the Bengalis. In their whim to rule over Bengal they come out with many unreasonable plans.

It is also pointed out this is the reason that the senior leaders from state are taking the directives of the central leaders seriously. They are also aggrieved at central leadership giving more credence to the turncoats who have migrated from TMC and indulging in dirty games only to settle their personal score which are completely non-political in nature and character. There are worries in BJP leadership that the September 13 violence might have isolated the party further from people and it will have adverse impact on the panchayat polls next year. (IPA Service)