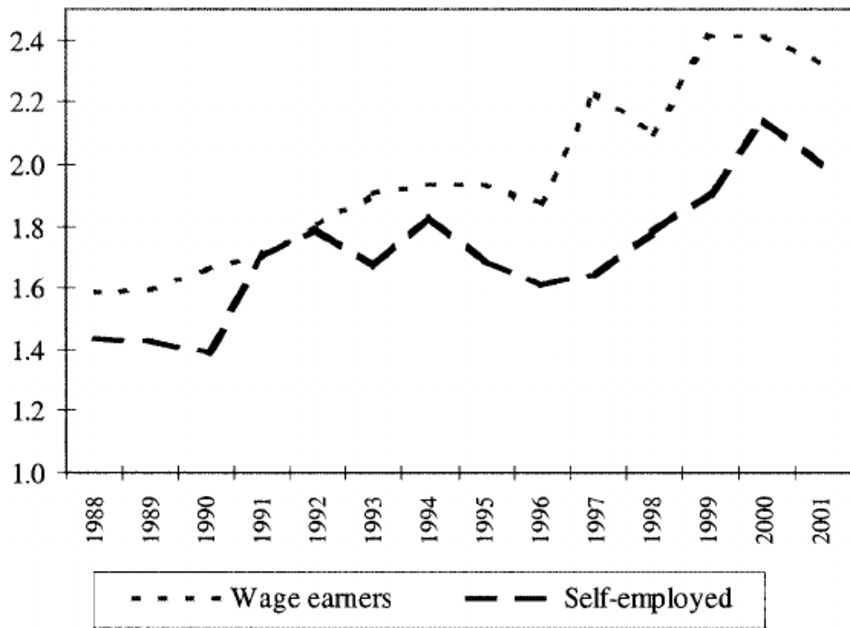 One of the major reasons for rising income inequality in both developed and developing countries in the globalised economy is the widening wage gap between skilled and unskilled workers in different sectors. It is often attributed to the increasing demand for skilled workers, particularly on account of rise in the use of technology in the production process. The notion of skill however is highly subjective and ideological, particularly favouring mental over physical labour and the relative importance of skill or its obsolescence depend on the requirements of capital in a given phase of production.

Hence, in the context of a particular production process, a set of skills can be considered highly valuable and might fetch a higher price but in subsequent periods as production processes undergo change it may lose its importance. This however does not imply that the skill becomes less useful but actually its exchange value or its marketability declines. Therefore, relevant skills actually mean skills that are in demand at a particular point in time and if the supply of such skills is in shortage, then those skills earn a premium over and above the average wage in the industry. Remember also that higher technology may not always require higher skills.

In fact, technologies and mechanisation or automation may actually reduce the use of complex skills by breaking complex processes into simple tasks. So, a process of de-skilling of the existing labourforce can take place in one sector of the economy and a demand for a different set of skills may arise in some other sectors. The rising wage gap is often attributed to globalisation as it increases trade between countries, and competition between economies and creates the necessity to adopt technologies enabling producers to compete in the global market. In fact, in a globalised world producers face global competition within local markets. With changing technology, demand for new skills and their return increases while those who are stuck to older production processes and work could claim relatively lower wages.

Expansion of the middle-income segment has wider implications for the economy as a whole. It increases demand for standardised goods allowing producers to take advantage of scale effects. A larger share of middle-income increases demand for durable consumer goods, such as vehicles, refrigerators, air conditions, television sets and so on and that creates a market for manufacturing goods which in turn creates new employment for low-medium skilled workers.

In the case of India, the share of durable consumer goods in the average consumption basket is very low which to a great extent explains the persistent stagnation of manufacturing in India. Less than 3 per cent of Indian households possess all five items: scooter or car, air conditioner, fridge, television and computer. During the period of liberalisation, the growth of the middle segment in India has not been very impressive.

In one decade according to a study by the Asian Development Bank the share of people within the middle-income group (2-20$/day) increased from 12 per cent in 1993-94 to 18 percent in 2004-05 in India, while in the case of China people within the middle-income bracket increased from 18 per cent to 70 per cent during the same period. But liberalisation has definitely increased mobility for skilled workers across the world which increased their premium over the average wage but the share of such skilled workers in the total workforce has been very small in India.

It is always important for a country to plan and synchronize its labourforce with the emerging pattern of work that seems to be evolving and growing in the future. If the allocation of resources is left to the market, it is only the rich who could be able to buy the necessary inputs to acquire those skills and that not only would increase the already widening income gap but also as a country would be failing to lifta vast majority of the young workforce to higher income brackets.

One argument, popular within policy circles, is that new technology and increased trade, demand new skills and the problem in the case of India is to impart such marketable skills to the vast majority of the workforce to make them ‘employable’. Undoubtedly relative values of skills change and people who are fast movers in attaining those skills get the advantage of higher earnings. But this is also a dynamic process and no skill could be in high demand forever.

Hence it involves a dynamic learning process as a response to changing global demand and it is illusory to suggest that individual efforts of attaining skills would solve the growing mismatch. There might be some efforts on the part of the government national, regional or local offering skill training programmes that serve particular requirements of industries and create employment and there can be policies of active interventions that promote vocational and more job-oriented courses. But will that mend the widening wage gap?

A skill set may be very much on demand in the current process of production but may not fetch a higher wage simply because there are too many suppliers of the same skill. In capitalism, the supply-demand mismatch is a reflection of its uncoordinated order which on the one hand may not produce sufficiently what is actually required and may produce in large amounts something for which there are not an adequate number of takers. The textbook imagery of corrections taking place through successive rounds of market adjustments is simply a myth. Actually, it gives rise to unused capacity on the one hand and a vast amount of waste on the other. Integration into the global market has actually increased the amplitude and frequency of this engrained turbulence.

But more importantly, the neoliberal regime thrives on reducing claims of workers across the skill scale. Workers in advanced countries face the threat of losing jobs and reduced bargaining power because production may be relocated to low wage segments of developing countries. But in low wage developing countries, the production relocated is relatively capital intensive according to local standards and may not be creating enough new jobs as has often been claimed also these production processes rely heavily on outsourcing and subcontracting in order to reduce wage costs.

Competing on the basis of wage costs is further accentuated when many developing countries compete with each other to grab a larger share of the global market. The workers in these cases receive a lower wage not because they are less productive but because they lack the bargaining power to protect their wages. Therefore, the widening wage gap between skilled and unskilled workers cannot be explained by productivity gaps alone. Jobs that require idiosyncratic skills or are less codifiable, generally enjoy greater power to negotiate for higher wages even at individual levels and workers employed in tasks that are more standardised face a greater threat of being replaced. This gives power to capital in pushing down wages of workers while a privileged few can be on a learning curve that can keep pace with changing technology and requisite skills and hence earn a higher premium.

Therefore, fragmentation of the workforce and wage competition with restrictions on mobility keeps the wages of already cheap labour low and a tiny portion of the workforce earns a skill premium over and above the average wage because of their higher mobility. Hence, the structural features of globalised capitalism explain better the widening wage gap rather than harping only on differences in skill or productivity. (IPA Service)

By Harihar Swarup The Nav Sankalp Shirvir focused on youth. So, it is ironic, that Hardik Patel, who was the Congress’s working president in the...