Betting On The Wrong Horse: Battle To Define Moderate Islam 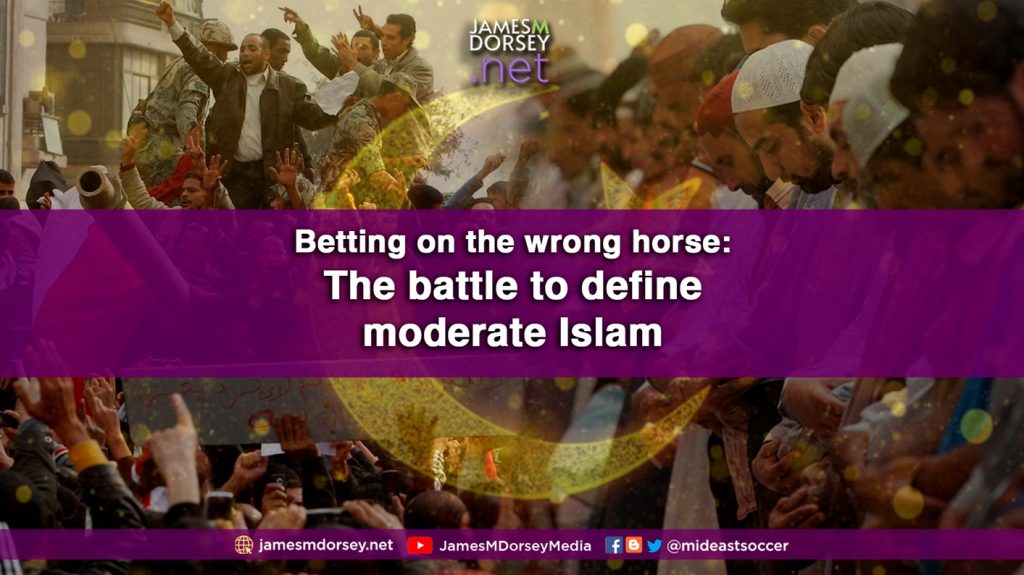 Proponents of a moderate Islam that embraces tolerance, diversity, and pluralism may be betting on the wrong horse by supporting Muslim scholars on autocrats’ payroll. Polling in the Middle East seems to confirm that state-sponsored clerics lack credibility.

Recent research suggesting that non-violent protest has increasingly become less effective magnifies problems posed by the clerics’ legitimacy deficit. The combination of lagging credibility and reduced effectiveness enhances the risk of politically inspired violence. Add to that that young Muslims gravitate towards militancy in a world of perceived persecution of the faithful.

Tam Hussein, an award-winning investigative journalist and novelist, who has spent time with jihadists in various settings, noted in a recent blog and an interview that a segment of Muslim youth, who see Western militaries operating across the Muslim world, often embrace the jihadist argument that Muslims would not be victims if they had a genuinely Muslim state with an armed force and religious laws that would garner God’s favour.

Achieving a state, the jihadists say, has to be ‘through blood (because) the rose isn’t got except by putting one’s hand on the thorns.’

Hussein cautioned that “this sentiment of young Muslims…cannot be combated with platitudes, ill thought out deradicalisation programmes, and naff websites set up to combat social media.” His insight goes to the crux of a rivalry for religious soft power in the Muslim world that, at its core, involves a struggle to define concepts of moderate Islam. In essence, Hussein argues that a credible response to religiously inspired militancy will have to come from independent Islamic scholars rather than clerics who do Muslim autocrats’ bidding.

The journalist’s assertion is undergirded by some three-quarters of Arab youth polled annually by Dubai-based public relations firm ASDA’A BCW, who have consistently asserted in recent years that religious institutions need to be reformed. When the erudite Azhari sheikhs such as Ali Gomaa seemingly support Sisi’s killing of innocents followed up by Habib Ali Jifri’s support for his teacher, one cannot help but understand their predicament and anger,” Hussein said, referring to scholars of Al Azhar, a citadel of Islamic learning in Cairo.

Hussein was pointing to Ali Gomaa, who, as the grand mufti of Egypt, defended the killing of some 800 non-violent protesters on a Cairo square in the wake of the 2013 military coup led by general-turned president Abdul Fatah al-Sisi. The coup toppled Mohamed Morsi, a Muslim Brother and Egypt’s only democratically elected president.

A Yemeni-born UAE-backed cleric, Al-Jifri, a disciple of Goma, is part of a group of Islamic scholars who help project the Emirates as a beacon of an autocratic form of moderate Islam that embraces social reforms and religious diversity, rejects political pluralism, and demands absolute obedience of the ruler. The group includes the former Egyptian mufti, Abdullah Bin Bayyah, a respected Mauritanian theologian, and his disciple, Hamza Yusuf, one of America’s foremost Muslim figures.

Autocratic reformers such as UAE President Mohammed bin Zayed and Bin Salman offer an upgraded 21st-century version of a social contract that kept undemocratic Arab regimes in office for much of the post-World War Two era. The contract entailed the population’s surrender of political rights in exchange for a cradle-to-grave welfare state in the oil-rich Gulf or adequate delivery of public services and goods in less wealthy Arab states.

That bargain broke down with the 2011 and 2019/2020 popular Arab revolts that did not spare Gulf countries like Bahrain and Oman. The breakdown was sparked not only by governments’ failure to deliver but also by governments, at times, opening political space to Islamists so that they could counter left-wing forces.

To revive the core of the social contract, Bin Zayed and Bin Salman have thrown into the mix degrees of social liberalization and greater women’s rights needed to diversify their economies and increase jobs as well as professional, entertainment, and leisure opportunities. At the same time, they have cracked down on dissent at home and sought to impede, if not at times brutally, reverse political change elsewhere in the region.

Nevertheless, the notion of an autocratic moderate Islam appears to work for the UAE and holds out promise for Saudi Arabia but is on shaky ground elsewhere in the Middle East and North Africa.

Recent polling by ASDA’A BCW showed that of the 3,400 young Arabs in 17 Arab countries aged 18 to 24 surveyed, fifty-seven per cent identified the UAE as the country where they would like to live. Thirty-seven per cent wanted their home country to emulate the UAE.

The diverging pictures may be two sides of the same coin rather than mutually exclusive. The survey and other polls and Mr. Hussein likely tap into different segments of Muslim youth. Some of those responding to polls may be empathetic but probably wouldn’t pull up their stakes because they are at a point where they have too much to lose.

Even so, recent surveys by the Washington Institute for Near East Policy showed that 59 per cent of those polled in the UAE, 58 percent in Saudi Arabia, and 74 per cent in Egypt, disagreed with the notion that “we should listen to those among us who are trying to interpret Islam in a more moderate, tolerant, and modern way.”

Recent academic research suggesting that non-violent dissent is seeing its lowest success rate in more than a century even though the number of protests has not diminished magnifies the resulting threat of militancy. One study concluded that the number of protest movements worldwide had tripled between 2006 and 2020, including the dramatic 2011 popular Arab uprisings. Yet, compared to the early 2000s when two out of three protest movements demanding systemic change succeeded, today it is one in six, meaning that protests are more likely to fail than at any time since the 1930s, according to Harvard political scientist Erica Chenoweth. (IPA Service)

Death Of Eight Persons During Flash Floods In Mal River In Bengal Poses Many Questions
Posting....