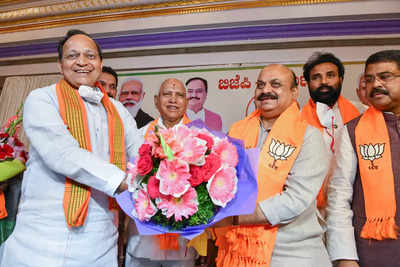 For an. unlikely Chief Minister, Basavraj Bommai, 61, got off to a good start. In the second month of his tenure, on September 2, 2021, he got a leg up when Union Home Minister Amit Shah—on his first visit to Karnataka after Bommai took over— endorsed him as the man to lead the BJP in the 2023 assembly elections in Karnataka. “Bommai has focused on small things. He has not embraced the VVIP culture—in Delhi, those who observe Karnataka closely are of the view that the BJP has strengthened itself after making Basavraj Bommai the Chief Minister,” Shah had said.

But that honeymoon period barely lasted six months with a gradual piling up of woes against Bommai—within the party, the central leadership, the state government and public at large. There have been complaints of a lack of will in tackling corruption and large-scale indecisiveness on pending new projects.

The biggest criticism, however, is that Bommai and his leadership has given free pass to the Hindutva right wing to execute its agenda—from a string of comments that has kept the hijab row simmering, to the issue of banning Muslims from temple festivals to the halal meat controversy.

While Bommai, eager to earn his stripes in the BJP, given  his social background that he was in the JD(S) as late as 2008, was expected, to be soft on Hindutva radicals, no one expected the CM—given his socialist background — to  fall in line  with fringe elements of SanghPraivar.

Bommai’s roots in the socialist and secular politics of the Janata Dal can be traced to his lineage — his father and former CM, S R Bommai was ardent follower of radical humanist movement of Leftist leader M N Roy.

Though Bommai made his foray into politics in 1996-97, when he was appointed political secretary to the CM J H Patel of the Janata Dal, it wasn’t until 2008, after his father’s death in 2007, that he contested elections. This was because the Senior Bommai didn’t want to use his credentials to promote his son.

It’s a discipline that continued in his families, with neither of his two children — son Bharat, an industrialist and businessman, and daughter, Aditi, an architecture student — displaying any political inclinations. His wife Chennamma is a home maker.

“Basavaraj wanted to serve people but has to wait for his time”, says J H Patel’s son Mahim Patel, the JD(U) Karnataka President.

Following his father’s death in October, 2007, with Bommai’s political career at cross roads, he was invited to join BJP by the party’s biggest face then and Lingayat leader S. Yediyurappa, Bommai adopted Shiggaon, a constituency bordering the Dharwad region, which did not have a BJP leader, and won the seat in 2008, and in 2013 and 2018 as well.

One of the hallmarks of Bommai’s time in the BJP, including two tenures as minister, was his ability to stay away from controversies while also emerging as a leader with knack for governance. He was the water resources minister between 2008-2013 and was most recently (2019—2021) minister for home, Law and Parliamentary affairs for Yediyurappa. “He is also hard working and has passion to become a big political leader”, says Bommai’s former JD(U) colleague, M P Nadagouda.

Despite tracing his roots to Hubli—where he grew up before graduating with an engineering degree from Bhoomaraddi College – his father representing the region for many years in the Assembly. Bommai has stayed away from politics of the region since it is controlled by Union Minister Prahlad Joshi and former CM Jagdish Shettar, with the RSS also an important force.

A former Hindi Journalist describes Bommai as a “shrewd tactful politician” who is aware of his limitations within the BJP.

As Home Minister, Bommai toed the Centre’s line on issues like the National Register of Citizens and the Citizenship Act. “He is a good listener on matters that are of interest to the BJP. If high command wants something, he is unlikely to say no”, says Bommai’s friends and ex-Congress MP V S Ugrappa. (IPA Service)