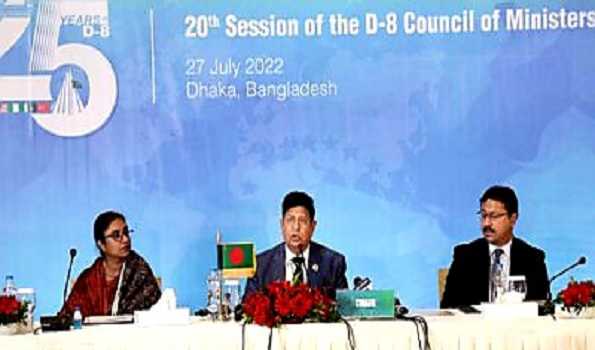 There were a few tangible, positive decisions taken at the virtually conducted Foreign Ministers’ summit at Dhaka. First, with the expected entry of Azerbaijan into the D-8, an expansion of regional group activities was on the cards, as organisational membership would rise to 9.

Further, it was generally agreed that by next year, the preferential trade agreement terms among members would be finalised. Members have been working on some of these issues, especially on the need for expanding trade and business on favourable, easier terms within the group, for some time now.

The meeting, inaugurated by Bangladesh Prime Minister Sheikh Hasina, was not without its share of controversies:  an unseemly spat over attending the ceremony was reported from one country only, Pakistan.

Since only one major Indian newspaper provided routine coverage of the proceedings in Dhaka, it is necessary to explain the origin and objectives of the D-8. Its eight members are Turkey, Iran, Nigeria, the UAE, Pakistan, Bangladesh, Malaysia and Indonesia. The collective ‘reach’ of D-8 extends from the borders of Europe to the Middle East, South and South East Asia. According to open source information, the population of D-8 is around 1 billion, the figure representing about 60% of the world’s Muslim population. In terms of territory, member countries cover 7.6 million square kilometres, or 5% of the world’s territory. As for trade and business activities, the volume has risen from around $35 billion in 2006 to nearly $130 billion at present, the figure representing around 3.5% of the total world trade.

The prime mover behind the D-8 is Turkey, as the country’s leaders first expounded the idea for setting up an organisation of developing Muslim countries in 1996.  Following preliminary talks, its formal launch was announced in 1997. The objectives of the new group were to expand mutual trade and business, promote closer multilateral cultural/economic/ties, encourage/increase connectivity and travel, increase tourism within the region, and generally ensure better living standards for the people.

The D-8, it was agreed, would pursue dialogue instead of conflicts, co-operation instead of exploitation, justice instead of double standards, and equality, not discrimination. The alliance, comprising countries with different standards of living and economic development, would actively seek to reduce intra-group economic disparities in a mutually agreed manner. Members also agreed that decisions at D-8 would be taken independently and without reference to their commitments/responsibilities announced /pursued in other organisations/bodies where they were stakeholders or partners.

Bangladesh Foreign Minister, Mr. A.K. Abdul Momen, set the tone representing the host country. The focus would be on discussing food and energy security for the developing countries all over the world. The deadly Covid-19 pandemic had taken a massive economic toll, and was not over yet. And after the outbreak of war between Russia and Ukraine, a dependable supply of foodgrains and fuel at reasonable prices was no longer guaranteed. The main reason was the disturbance in existing supply chains, thanks to the war continuing in Ukraine, along with the crippling effect of the economic sanctions imposed by the West on Russia.

Mr. Momen said as things stood, there was some possibility of achieving an improvement in the tourism sector and greater movement among the people, as pandemic-dictated restrictions were being gradually lifted. D-8 countries should concentrate on the positives and discuss how to help each other out in the present situation. In this context he added that it should be possible to finalise and announce the preferential trade agreement terms among members that have been under discussion for a number of years, sometime next year.

Once these were in place, there would be a major increase in the volume of intra-group trade and business, not to mention new economic opportunities, tie-ups and agreements. It was also important to ensure that an uninterrupted supply of power was ensured among members to maintain and possibly increase, industrial production. Increasing multilateral trade was a priority for Bangladesh, whose business turnover within the group has risen to over $10 billion, he said.

There was a discussion on the application made by Azerbaijan to join the D-8. Iranian Foreign Minister Mr. Hossein Amar Abdullahian expressed his country’s total support and other members too responded favourably. A positive decision would be announced shortly, said observers.

There was a little unpleasantness over the representation from Pakistan at the D-8 Foreign Ministers’ summit. Initially, Ms. Hina Rabbani Khar, Pakistan’s well-known Minister of State for Foreign Affairs, was scheduled to attend. But shortly before the proceedings were about to start, she announced the cancellation of her visit.  No reason was cited officially.

Islamabad authorities announced that Mr.Bilawal Bhutto Zardari, currently Minister for Foreign Affairs, would represent Pakistan at the conference instead of Ms. Khar. Pak-based media accounts suggested that Ms. Khar who is considerably senior to Mr. Zardari within the diplomatic cadre, had been offended by the sudden shift by the Pakistan government over this issue.

Pakistani officials however, defended the switch, pointing out that given the ‘hybrid format’ of the D-8 proceedings, there would be no difficulty for anyone involved, diplomatic or otherwise. The choice of the adjective (hybrid) however, upset a section of Dhaka-based Bangladeshi diplomats hosting the programme, according to other reports. There has also occurred an unusually long and frank exchange over the official preference shown to Mr. Zardari in the lively Pakistani social media. (IPA Service)