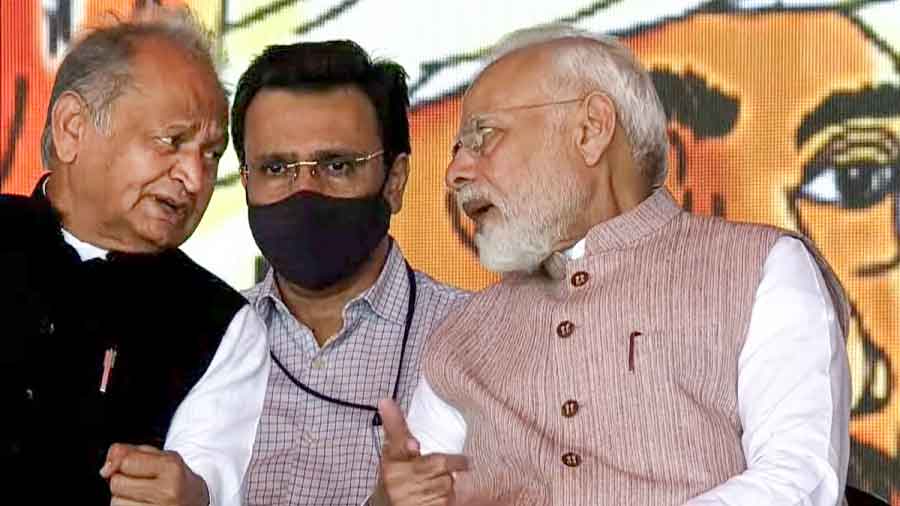 Was it a coincidence or a deliberate attempt that on the day dalit student leader of University of Hyderabad Rohith Vemula’s mother extended solidarity to Rahul Gandhi by joining his Bharat Jodo Yatra in Telangana, the Rajasthan chief minister Ashok Gehlot was busy eulogising Narendra Modi as a leader who commands global respect.

Gehlot heaping eulogy on Modi at a public function at Mangarh Dham in Rajasthan’s Banswara on Tuesday should not have come as a surprise, but actually what has caused dismay is Gehlot’s praise for Modi does not resonant the global remark that Indian democracy under Modi faces an existential crisis as it is finding tough to navigate the turbulence created by the RSS-BJP.

It is an irrefutable fact roots of democracy are quite deep in the country. But it cannot be denied that Modi in a deliberate manner has been weakening it, garbling it. Modi has even been pulled up not only by the intellectuals and academics of India but also by the global rights organisations of corroding its base, for crushing it and trying to replace it by majoritarian governance. It is worth mentioning that some months back the Swedish organisation V-Dem classified India as an “electoral autocracy”. The 2021 World Press Freedom Index produced by Reporters Without Borders (RSF), placed India at the 142nd rank out of 180 countries.

True enough Gehlot’s eulogy gives rise to the apprehension that he was trying to build bridge with Modi. It is also rumoured that the Congress leadership has been planning to bring about a major change in the leadership of Rajasthan Congress and its government in the state. Hindutva ideology has permeated the state apparatus. It is beyond comprehension how a seasoned politician like Gehlot could not make out that ever since his second return to power in 2019,Modihas pursued policies that have corroded the country’s democracy. Though the BJP uses devices to conceal its real intentions, there is no doubt behind the façade of majoritarian Modi government has been striving to make a tactical shift to authoritarian rule. Led by Modi, the BJP administration has already succeeded in establishing an ethno-religious and populist style of rule since 2014.

No one will object to his talking of some positive aspects of Modi like work ethics, but his describing him a global leader provides the glimpse of some wrong intentions. Gehlot must look around and see how the turn coats, the Congress leaders who switched over to the BJP, are being treated by Modi. They are offered ministerial berths, but are denied respect. The ministerial berths are more of the nature of compensatory payoffs. It is really shocking that a how a person who abused the state machinery and statues for his personal gains could symbolise a vibrant democracy.

The most revealing facet of Gehlot’s eulogy is it has come in the midst of Rahul Gandhi’s Bharat Jodo Yatra. He must have realised the intensity of the prejudice it would give rise into the minds of the common people more than the Congress cadres who have been marching with the hope that the Yatra would protect democracy from being ruined.

Yet another factor which ought to have desisted him from making this speech is Radhika Vemula, the mother of Rohith Vemula, the dalit student of the University of Hyderabad who died by suicide in 2016 following alleged harassment perpetrated allegedly by some senior BJP leaders, extending solidarity to Bharat Jodo Yatra and walking along with Rahul Gandhi. Her participation symbolises the importance of the Yatra and more than that the changing political perception of the people of the country. Radhika’s participation has much wider implication, as Rohith is said to believe in Marxist ideology.

Coinciding with her march Radhika Vemula tweeted; “Extended solidarity to Bharat Jodo Yatra, walked with Rahul Gandhi, and called upon Congress to save Constitution from BJP-RSS assault, Justice for Rohith Vemula, passing Rohith Act, increasing representation of Dalits, oppressed sections in higher judiciary, education for all”. The Congress’s official Twitter handle and some of its leaders also tweeted pictures of Radhika Vemula walking with Gandhi during the Bharat Jodo Yatra. Obviously it manifested the mood of the people of the country that they are craving for change in the power structure.

Gehlot’s eulogy for Modi simply undermines Rahul’s stand on BJP and RSS; “The Congress is also an emotion, as taught by Mahatma Gandhi. It is the opposite of fear. The moment the Congress party starts spreading the idea, ‘Confront your fear, don’t be a coward, because hatred is cowardice’, naturally, the BJP will start to collapse.”

Narendra Modi’s resolve to trample democracy has a definite political dynamics. Sharing of the ideas participation of the people in the policy decision making process are the indices of a strong and vibrant democracy. But Modi has dubious reputation of taking policy decisions without public consultation. It is an open secret that even the opposition members are not allowed to place their views on the floor of the parliament. There are number of such instances; at least two such instances could be recalled, one abrogation of 370 and adoption of three laws for farmers. Citizens’ participation in policy-making is an important factor in assessing the quality of democracy. In democracy, the participation in policy-making is crucial. (IPA Service)