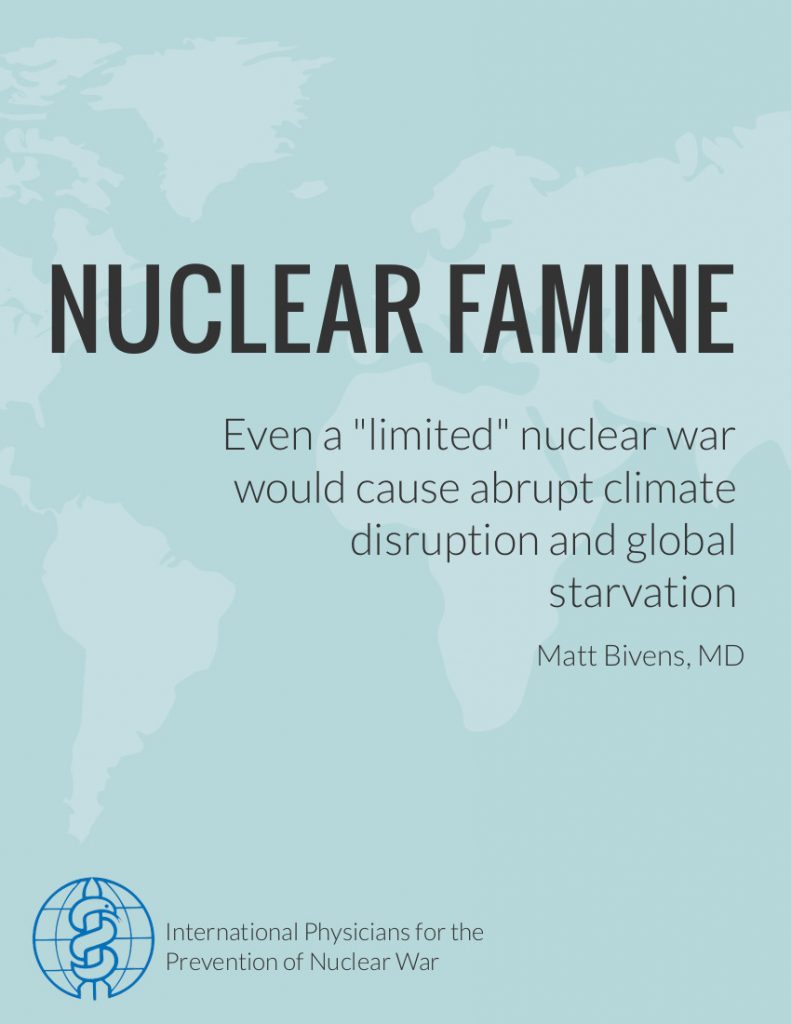 The war between Russia and Ukraine with an overt involvement of the NATO has killed thousands, pushed millions to refugee status and caused immense destruction of resources. Much in danger are the nuclear power plants in Ukraine which if damaged by intentional attack, accident, technology failure or cybercrime, would become potential nuclear bomb. The Plant at Zaporhizhzhia which has been occupied by the Russian forces can be a flash point. Ukraine has a history of dreadful Chernobyl nuclear accident.

Moreover the danger of a use of nuclear weapons in case the war continues is real as both NATO and Russia have threatened each other with the use of these weapons if the situation arises. They have till date not explicitly declared that in any case nuclear weapons would not be used. The collateral damage in such a situation will be catastrophic. An evidence based new scientific study “Nuclear Famine – Even a “limited” nuclear war would cause abrupt climate disruption and global Starvation” highlights the gravity of humanitarian consequences in case of use of nuclear weapons even at a smaller scale.

This report released on 15th August 2022 and published in Peer Reviewed Journal ‘Nature Food’ summarizes the latest scientific work by Lili Xia and Alan Robock of Rutgers University together with colleagues around the globe. It shows just how dangerous even a “limited” nuclear war in one part of the world would be. The report says that ‘a so-called “limited” or “regional” nuclear war would be neither limited nor regional. On the contrary, it would be a planetary-scale event. In fact, it would be far more dangerous than we understood even a few years ago. A war that detonated less than 1/20th of the world’s nuclear weapons would still crash the climate, the global food supply chains, and likely public order. Famines and unrest would kill hundreds of millions, perhaps even billions’.

When a nuclear weapon detonates, it briefly creates temperatures four times hotter than at the center of the Sun. Such detonation would start firestorms, injecting large amounts of soot into the upper atmosphere, which would spread globally and rapidly cool the planet. An abrupt cooling event of 1.3°C that would follow after sun rays to the earth are blocked due to soot and smoke in the atmosphere would be a massive planetary shock. It is important to know that latest ice age peaked about 20,000 years ago, when global temperatures were likely about 10°F (5°C) colder than today.

All this would lead to crop failure leading to extreme starvation worldwide. As a result unprecedented global famine would follow. Total available food calories would decline precipitously for the next seven to eight years affecting 1,911 kcals/day, which is a starvation cutoff. During the Great Bengal Famine in 1943, available food decreased only 5% – but panic-buying ensued, food prices soared and 3 million people starved to death. That resulted from a drop in available food of 5%. One can only imagine how unevenly life-sustaining food would be distributed in a world where available food had dropped 23%, 33%, 41% or 48%.

The Rutgers-led international team that modelled expected starvation deaths after a regional India-Pakistan nuclear war, who are supposed to have 160 nuclear weapons each, has also calculated, for the first time, the deaths that would result from the even worse mass famine that would follow a full-scale nuclear conflict between Russia and the United States. They estimate that 5 billion people out of 6.7 billion worldwide would be dead within two years.

There is thus need to build a strong narrative globally for the complete abolition of nuclear weapons. The International Physicians for the Prevention of Nuclear War (IPPNW) has been vociferously raising the issue of humanitarian consequences of nuclear war. This was the mainstay for the adoption of Treaty on the Prohibition of Nuclear Weapons (TPNW) passed by the UN General Assembly on 7th July 2017. The International Campaign to Abolish Nuclear Weapons (ICAN) was awarded Nobel Peace Prize for this. The treaty delegitimizes and declares illegal the production possession, trade or use of the nuclear weapons in any form. This is the only multi-lateral treaty for nuclear weapons’ abolition. It is an opportunity for the global community particularly the nuclear weapons possessing countries to join the treaty and prove their intent for nuclear weapons free world.

It is unfortunate that after four weeks of meetings, the 10th Nuclear Non-Proliferation Treaty Review Conference has failed. Nuclear weapons possessing countries lacked seriousness on the implementation of Article VI according to which ‘Each of the Parties to the Treaty undertakes to pursue negotiations in good faith on effective measures relating to cessation of the nuclear arms race at an early date and to nuclear disarmament, and on a treaty on general and complete disarmament under strict and effective international control’. The five major nuclear powers, the P5 failed to answer what they have done till date in the last 52 years to full fill their obligations on article VI.

If the world does not learn lesson now we would enter into a point of no return. Nuclear weapons if present on earth will always pose the danger of being used resulting into catastrophic collateral damage for which medical science has no remedy to offer.  (IPA Service)