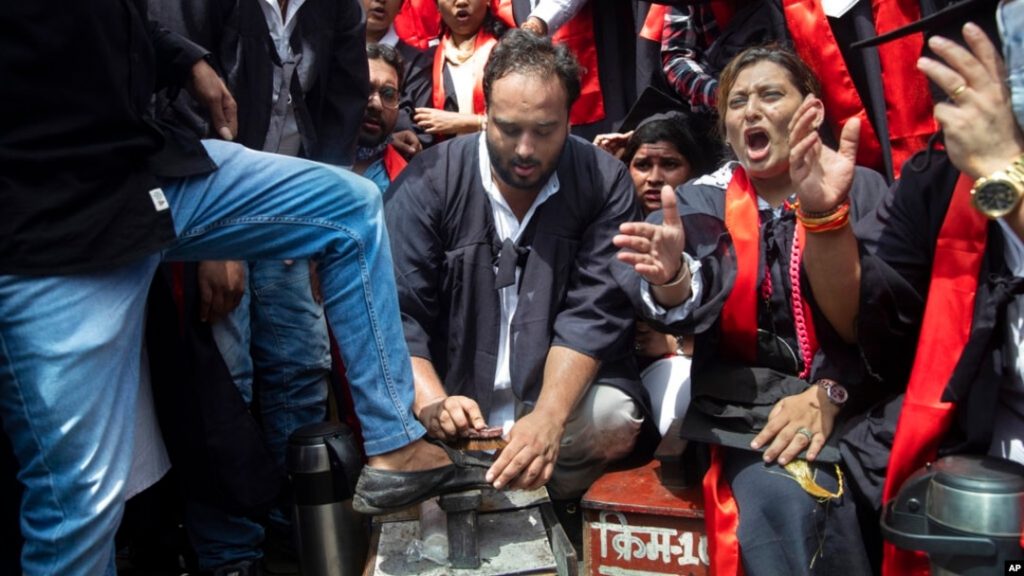 Unprecedented unemployment crisis in independent India that has been building up with sharpest ever hike in joblessness since 2014 has finally exploded on June 14, 2022, when the Centre announced Agnipath (literally the Path of Fire) scheme for short term recruitment in armed forces. The Fire triggered eruption, unemployed youths suddenly came out on streets, wetn on the rampage, setting trains on fire, torching vehicles, damaging both private and public properties, and even attacking houses of leaders of the ruling establishments. It spread to Delhi, Uttar Pradesh, Bihar, Haryana, Telangana, Odisha, West Bengal, Madhya Pradesh, Punjab, Jharkhand, and Assam in a very short span of time, and is even spreading.

June 20 is the day of spontaneous Bharat Bandh and by the morning as many as 483 trains had to be cancelled. Ignorance of even the Union Ministry of Home as to who gave the call, which was finally attributed to various ‘groups’ shows it to be a general outburst of the unemployed youths against Modi government that has been trying to divide them on communal lines to avoid such an eruption which obviously failed.

The Prime Minister Narendra Modi has led us in his ‘New India’ only to witness worst level of unemployment since Independence both on the usual status (calculated yearly) and current status (calculated weekly) bases, step by step, with big slogans generating unprecedented hope among the unemployed youth, who supported him to become Prime Minister of India in May 2014. He first promised 10 million jobs every year in November 2013 in Agra election rally if BJP would come to power.

His very promise shows that he did not have the idea of the real unemployment situation in the country beyond some simple data of the Labour Bureau survey report of the Union Ministry of Labour and Employment that put the unemployment rate in 2012-13 at 4.7 per cent, which was considered very high at that time, and unemployed youths were craving for jobs. The 45th session of the Indian Labour Conference was held on May 17-18, 2013 in which the issue of unemployment came for discussion, and following consultations among the representatives of workers’ and employers’ organizations and Central and State government, the Committee on Measures to Improve Employment and Employability had recommended that the National Employment Policy be finalized as a matter of priority.

However, when came to power, Modi soon got the insiders view of the growing unemployment crisis, which he was not able to solve. Therefore, he conveniently dropped the idea of making the National Employment Policy, and was just ignored during the 46th session of the Indian Labour Conference held in 2015. No session of ILC is held thereafter, however, Modi government has announced to have this policy in 2022-23, just two years before the next Lok Sabha election in 2024.

Unemployment rose to 6.1 per cent by the beginning of 2018, according to NSSO data, which was 45 years high after 1973-74. Since Modi government was trying to suppress the data it was leaked out just months before the Lok Sabha election 2019. Towards the end of the election, NSSO had even come out with another data putting the government claim on growth and development questionable by revealing that 36 per cent of the companies were even not traceable whose data were used to calculate GDP. When Modi won the election he did first thing to merge NSSO with CSO to create a new entity named NSS. It was alleged that his intention was to keep the neutral data hidden from the public and to release only those data which his government wanted to give at their own convenient time.

The immediate reasons for sharp increase in unemployment was his demonetization of November 2016, which made millions of enterprises shut down and millions scale down their production to even 25 per cent. It rendered millions of workers out of job. Soon after, GST was implemented from July 1, 2017 without preparation which further increased unemployment to a new high. Overall economic policy, such as selling or disinvestment of Public Sector Undertaking, and favouring a handful of corporates rather than the entire private or informal sectors made it worse.

PM Modi then did not act but simply repeated his five-year-old promise of providing ‘work with dignity for every hand’. If India had to give work for every hand it had to create about ’20 million jobs’ not just ‘10 million’ promised by him in 2013 Agra election rally. Suppression of data could not help joblessness among youths, because two-thirds of India’s population is below the age of 35, and around 16 million youngsters attain adulthood every year aspiring for quality job. However by mid-2019, it had become clear that almost 20 per cent of urban males and 25 per cent of urban females were most likely to find no jobs at all, not to talk about quality jobs.

At that time 7 million youths were leaving farm sector and migrate in search of employment in other sectors every year. Promises were not delivered, but the unemployed youth again supported him to give more time even though in place of ‘work with dignity for every hand’ the BJP leaders had started talking of jobs without social security such as ‘selling pakoda’ on the street, which soon exposed the weakness of the very idea of BJP brand employment during the lockdown, when even such employment became impossible.

The current unemployment rate rose to 9.06 per cent per cent in December 2020, 8.1 per cent in December 2021, and 7.71 per cent on June 19, 2022, as per the CMIE data. With sharply rising prices, especially food prices, and inflation it makes deadly cocktail with joblessness. The announcement of only 4 year job in Agnipath scheme, which has now been increased to 6 years, has increased the pangs of joblessness as rubbing salt on the injury. No rolling back of the scheme statement and threatening the unemployed protestors of keeping them out of armed forces jobs on account of indiscipline has further complicated the matter. The claimed merits of this recruitment drive are also questionable and hence must be debated thoroughly before implementation. There is no way out for the Modi government except coming out with a comprehensive employment policy. (IPA Service)