Angela Lansbury Was A Brilliant Actor And A Committed Socialist 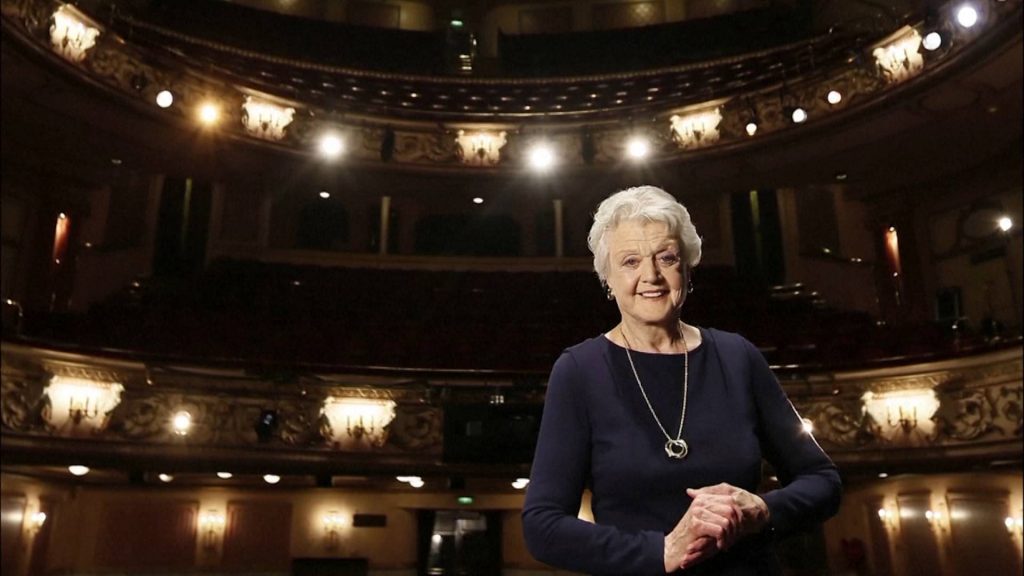 It’s good to discover, in reading the tributes to Angela Lansbury — who died on October 11 at age ninety-six — that the beloved actor reportedly considered herself “a proud socialist.”

She was a comrade via her illustrious lineage: her father was Edgar Lansbury, the British socialist politician, and her grandfather was George Lansbury, the pacifist, socialist, and leader of the British Labour Party from 1932 to 1935. Her mother was Irish actor Moyna Macgill, and they were fleeing the Nazi bombings of England during the London Blitz when they arrived in New York City in 1940 seeking access to the entertainment industry. They gradually wound their way to Hollywood in 1942, where teenage Angela Lansbury’s astonishing career really began.

Lansbury was the rare actor who achieved so much multifaceted success over so many decades in such a variety of media — film, theater, television — that several generations of audiences who loved her could be thinking of her quite differently.

Legions remember her fondly as friendly, practical sixty-something crime fiction writer and amateur sleuth Jessica Fetcher in the massively popular TV series Murder, She Wrote (1984–1996). Kids raised on the 1991 Disney animated version of Beauty and the Beast recall with affection Lansbury’s motherly teapot character Mrs Potts singing the title song. I have a friend who’s been obsessed since childhood with the part-live-action, part-animated Bedknobs and Broomsticks (1971), featuring Lansbury as a magic-practicing, singing, dancing, Nazi-fighting would-be witch and reluctant nanny.

Dedicated theatergoers probably remember her most reverently as a triple-threat talent who achieved smashing successes playing such divergent characters as the dazzling, life-loving eccentric Auntie Mame, in the original 1966 musical Mame, and the slatternly, murderous Mrs Lovett in Steven Sondheim’s savagely dark Sweeney Todd: The Demon Barber of Fleet Street (1978).

The indomitable Lansbury was still taking Broadway roles right up through age eighty-eight, with her portrayal of Madame Aracati in Noël Coward’s Blithe Spirit in 2014. As late as 2016, she considered doing the demanding dramatic part of the possessive grandmother in a stage revival of Enid Bagnold’s The Chalk Garden, before finally accepting that it would be too much for her.

Though a huge film fan from her early youth, Lansbury considered the stage her primary career: “The theater always came first. Movies were incidental.” But personally, I’m entirely dedicated to her great film performances. There are so many of them, though almost invariably in supporting roles, it’s a wonder the Hollywood studio system so botched her film career that theater looked good by comparison.

What a natural she was on film! She was Oscar-nominated for Best Supporting Actress for two of her first three roles in her incredible debut year of 1944–45. She was nominated three times, but never won, and was nominated eighteen times for Emmys — whereas in the theater world, she seemed to win a Tony Award every time she turned around.

Her famous first movie role, for which she was cast at age seventeen, was as the sly, insolent Cockney maid Nancy in the Gothic melodrama Gaslight (1944). Up against stars Ingrid Bergman and Charles Boyer, both giving tremendous performances, Lansbury brings such casual lewdness to Nancy’s flirtations with “the master,” while treating “the mistress” with such slack, frowsy impudence, it’s still eye-popping to watch today.

She demonstrated her effortless range immediately by playing the comical supporting role of Edwina, the sweetly boy-crazy teenage older sister of Velvet Brown (Elizabeth Taylor) in National Velvet (1944). And she followed that up with a stunningly poignant performance in The Picture of Dorian Gray (1945), playing Sibyl Vane, the innocent young singer in a tatty family-run tavern theater who has the misfortune to fall in love with wealthy, exquisite man-about-town Dorian Gray (Hurd Hatfield) just as he begins experimenting with the callous pursuit of pleasure.

Lansbury’s Sibyl Vane role was a difficult one to make credible so many years after the silent film era, because the sweet “ruined girl” of melodrama had become such a trite character. She was all but mocked out of existence in the wisecracking 1940s. But young Lansbury imbues her with freshly sorrowful conviction, so that it’s painful to see such a flower-like naif crushed. Lansbury never looked lovelier than when she played Sibyl Vane. Whereas the deliberately unglamorous lighting on the Nancy character in Gaslight emphasizes Lansbury’s full face, especially the sullen downturned mouth, the black-and-white cinematography in Dorian Gray softly molds her cheekbones and dramatizes her big glowing eyes.

Stardom and lead roles should’ve followed, but MGM made a mess of it, keeping her in supporting roles and casting her, as Lansbury put it in one of her biographies, as “a series of venal bitches” many years older than Lansbury’s actual age. A typical role was as hard-bitten Em in the Judy Garland musical The Harvey Girls (1946). Em is the lead entertainer in a Wild West dancehall and, under the same roof, the implied madam of the brothel, who’s clearly supposed to be pushing forty.

Part of the problem for Lansbury in having these roles forced upon her was that she was too damn good in them. She looked young, but readily achieved the effect of much older, worldlier women. Performing the raucous song-and-dance number “Oh You Kid” in The Harvey Girls, twenty-one-year-old Lansbury even finds a way to dance jadedly, tossing up her legs in a humorous, lazy fashion that communicates how aware she is that she’s entertaining a mob of drunks who only want to look up her skirt anyway, so precise choreography is hardly required.

And at age twenty-three in State of the Union (1948), she’s playing the icy newspaper owner determined to be even tougher than her press tycoon father once was. She’s also running the campaign of the man she’s trying to get elected president, played by fifty-something Spencer Tracy. She and the candidate are involved in an intense affair that’s threatening his marriage to a formidable wife, portrayed by Katharine Hepburn. Once again, Lansbury more than holds her own in scenes with two powerhouse stars — in fact, she dominates their scenes, something that rarely happened to Tracy or Hepburn.

Lansbury could always pivot easily from drama to comedy to musical, and all the shades in between. She’s at her ease and getting all her laughs as spoiled young Princess Gwendolyn, constantly threatening to “throw myself from the highest turret” if she doesn’t get her own way in the riotous Danny Kaye farce The Court Jester (1955). But just three years later, she makes an easy adjustment to the role of a middle-aged, gossipy gorgon-mother trying to land a wealthy aristocratic husband for her awkward debutante daughter in Vincente Minnelli’s classy comedy starring the ultrasophisticated couple Rex Harrison and Kay Kendall, The Reluctant Debutante (1958).

But even with such consistent displays of extraordinary talent, Lansbury shocked everyone with her uncompromising performance as the rancidly horrible mother in The Manchurian Candidate (1962), directed by John Frankenheimer. She wasn’t the first choice for the role. Legend has it that the film’s star, Frank Sinatra, was stumping for Lucille Ball in the unlikely part of Eleanor Shaw, a high-level communist operative whose cover role is acting as the power-behind-the-throne of her husband, boneheaded right-wing politician Senator Shaw.

The senator is conducting an idiotic but influential anti-communist witch hunt while simultaneously running for vice president, all at his wife’s direction, in a thoroughly plotted attempt to seize power in the United States. In exchange for her assent, Eleanor Shaw has sold her son Raymond (Laurence Harvey, only three years younger than Lansbury) to the communists, arranging to have him act as the brainwashed assassin who’ll ultimately murder the president so Senator Shaw, elected as veep, can succeed him.

Just see how Lansbury as Eleanor Shaw exudes obsessive menace, watching on primitive black-and-white TV from behind the scenes as her husband threatens to name an outrageously fictional number of practicing communists in the Senate. Hovering over the TV screen like a vulture as she vicariously controls his action, Lansbury adds to the woman’s power a kind of appalling, agitated, sexualized thrumming underneath the surface, so that even as she stares fixedly at her husband, she twitches and shifts compulsively.

The ugly physicality of the performance is harrowing. In the final confrontation of mother and son, after she’s destroyed him and they’re heading toward the endgame, she admits everything to him. She looks haggard and sweaty in this ghastly confessional scene, as if she were excreting toxins from her pores. And her deranged sexuality is made manifest when she ends by promising to avenge him once she’s in power and kisses him hard on the lips during a dreadful fade to black. After that, it’s only a matter of time before he commits suicide.

Lansbury did so much brilliant work on film, it’s odd to feel cheated of all the work she didn’t get to do. But just think of all those potentially epic leading roles that never were and how they shadow her movie career! She tartly noted the lost possibilities in her 1999 authorized biography Balancing Act, as well as the way she very sensibly moved from medium to medium, following the better opportunities that came her way. The melancholy is mine!

But at least there’s one more performance to look forward to, however small it might be. Lansbury’s cameo performance in Glass Onion: A Knives Out Mystery, coming out at the end of this year, will be her last onscreen appearance. (IPA Service)