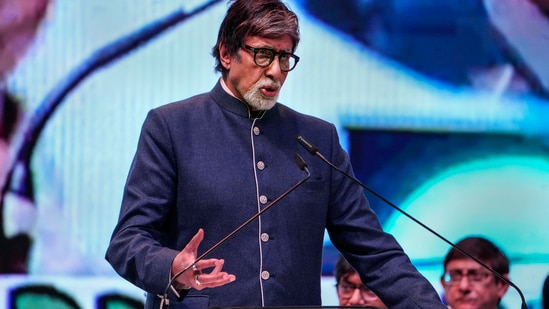 Finally, megastar Amitabh Bachchan has spoken truth to power! And in the city where he spent a part of his youth…Kolkata! Then, early in his tinsel-town career, after moving to ‘Bombay’, when his screen roles demanded, he was the “angry young man”, who in real-life was known to dodge issues of civil liberties, not because he was less eloquent, but because he preferred to steer clear of taking a position.

The ‘Big-B’ always played safe. His baritone was only for cinematic-effect. Otherwise, he was the stentorian un-emphatic. The ‘Big-B’ hardly found a voice or was the voice of the voiceless in real life. So much so, he ran away from politics. The world clapped at his angry young man roles. In movies that remained stuck in the minds of gullible young men who are today in their late fifties and sixties.

The reality was that Amitabh Bachchan stopped being ‘angry young man’ the minute he was out of earshot of the film studio. The number of times Amitabh Bachchan has spoken truth to power can be counted on two fingers. The first time nobody remembers, the second time was on December 15, 2022, at the inauguration of the 28th Kolkata International Film Festival.

Suddenly, after a rambling preamble, Bachchan surprised everybody in the room with references to “civil liberties” and “freedom of expression”. In what context he didn’t specify, but it must have had to do with ‘Pathan the movie’ which is facing flak for allegedly taking the Hindu-right for granted. Maybe, it was the presence of West Bengal Chief Minister Mamata Banerjee. Perhaps, it had to do with Shah Rukh Khan, who was the preceding speaker.

The ‘Pathan’ had reason to be angry and he took it out on Social Media, which amplified further, and farther. King khan‘s words “Social media is often driven by a certain narrowness of view that limits human nature to its baser self…I read somewhere-negativity increases social media consumption…Such pursuits enclose collective narrative making it divisive & destructive” must have struck Amitabh Bachchan hard.

Perhaps, he no longer wanted to sound wordless, and tame. After all, he was in the company of the brave and the beautiful. And where Shah Rukh Khan left off, Amitabh Bachchan resumed.  But he could have been more specific, more to the power-point when speaking truth to power. The ‘Big-B’ spoke everything in one single sentence which followed other sentences that in hindsight appeared to have been preparing the ground for the single significant one

The ‘Big-B’ spoke of incidents that created communal divides. He spoke of the British Raj censors and then, out of the blue, without a hint or clue, he broke from the past and came to the here and now, asking questions on civil liberties and freedom of expression. “Even now, I am sure my colleagues on stage would agree that questions are being raised on civil liberties and freedom of expression,” the taller than the other men at the KIFF asked.

Coming on the heels of Shah Rukh Khan’s comment that Social Media is always driven by a narrowness of views that makes it more divisive and destructive, Big-B’s remark that “questions being still raised on civil liberties and freedom of expression” was an endorsement of SRK’s verdict on the “Boycott Bollywood” trend of recent months. Nothing hurts and unites Bollywood more than a string of costly flops. Bankruptcy and Bollywood do not go together.

For the ruling Bharatiya Janata Party, ‘Boycott Bollywood’ takes forward its agenda. And Bollywood’s refusal to “correct” its ways is the flipside of the coin… “We will not be cowed, made to kowtow.” Of course, the outcry against the Pathan song ‘Besharam Rang’ is an assault on free speech and “civil liberties” as correctly pointed out by Amitabh Bachchan, albeit without such directness.

The problem is freedom of expression also incorporates the freedom to boycott and Shah Rukh Khan cannot malign Social Media for the “narrowness of views” of the movie viewing public. Freedom of speech and expression is a two-way street, and different from ‘cancel culture’.

What SRK and Amitabh Bachchan should do, while speaking truth to power, is to speak out not only when events hurt them, and their ilk. The “narrowness” that blights Social Media isn’t exclusive. The influential SRK and Big-B should talk about the civil liberties of everybody, irrespective of who, what and which. Otherwise divisions will only widen and increase.

The fact that it was Kolkata and West Bengal Chief Minister Mamata Banerjee was the host gave both SRK’s and Big-B’s comments political significance. Bollywood and the Opposition have found common ground, and the enemy was common, too. Most importantly, Amitabh Bachchan was finally off his perch on the fence. He has at last taken a position. (IPA Service)