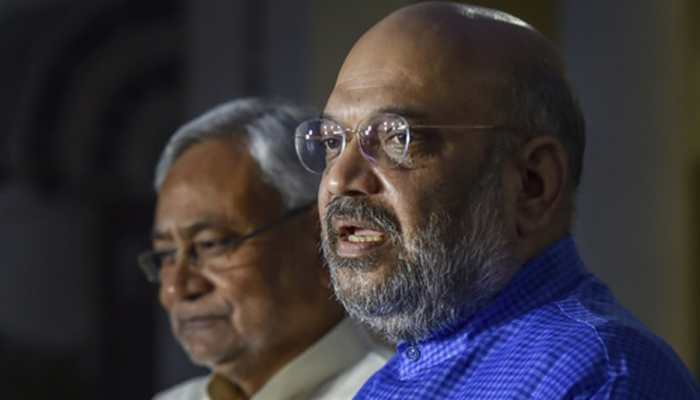 After their design to confine Nitish Kumar to Bihar going haywire,  Prime  Minister  Narendra Modi and his lieutenant Amit Shah have chalked out a fresh strategy to unleash a blistering attack on him and portray him as an opportunist politician who even did not care for his political mentor Jay Prakash Narayan. Modi and Shah are conscious of the fact that the BJP can  do better  in  the 2024 Lok Sabha elections if they succeed in portraying  the Bihar  chief  minister as a failed administrator. In their perception Bihar in the changed political scenario would play the pivotal role in ensuring the defeat of the BJP.in the coming Lok Sabha polls.

This is the second visit of Shah to Bihar within 20 days. At his September 23 public rally in Purnea under Seemanchal, Shah had severely despised and tried to smear Nitish’s “sushasan” (good administrator) image. Shah had described him as opportunist, unreliable and deserter. To present Nitish in unpleasant frame, he had contrasted the development works undertaken by Modi, of course which were simply non-existent and lies. He strained to reach out to the people of the state with more promises to develop Bihar and empower them. He said that Bihar was Modi’s priority and he will do everything possible to defeat Nitish at the hustings.

In continuity to his promise to usher Bihar into prosperity Shah is visiting Bihar on October 11, to celebrate the birth day of the Lok Nayak Jayprakash Narayan at his native village Sitab Diara. This portrayal of their love and respect for JP has been quite intriguing. This is old strategy of the RSS to identify with the aspirations and mission of JP. The importance of the visit could be gauged from the fact that he would be carrying the Uttar Pradesh chief minister Yogi Adityanath with him. Strictly speaking Yogi has no role, rather than coming to Sitab Diara. He is being brought with two tasks in mind; first, he will announce development of JP’s village and to  polarise the Hindu voters of the adjoining region.

In 1977 the RSS used JP ruthlessly to join the mainstream politics and emerge as the key player on the centre stage of the Indian politics, just ahead of the Lok Sabha elections and to fructify its design even agreed to merge its political organ Jana Sangh without any condition into the Janata Party. Once it achieved its goal neither the RSS nor the BJP took care of his mission. Ironically the saffron brigade never bothered to give a face lift to his village and create an institution to commemorate his principles and ideas.

Being on the bank of river Ghagra, Sitab Diara has been witnessing land erosion. Sitab Diara is closer to UP. But even the Yogi government did not make any effort to protect the village. During his eight year rule, Modi never visited JP’s birth place to pay his obeisance to JP and take care of his house.  Some time back a demand was made by some leaders associated with the JP’s Bihar movement to declare his house as a national heritage. It is yet to be given a concrete shape and character. Unfortunately no significant attempt was made to improve and strengthen the basic infrastructure round the village.

Shah’s visit, incidentally his second to JP’s ancestral village since 2015, has generated considerable heat in political circles. Nitish Kumar has asked Shah to have a look on the parts of Sitab Diara falling in Uttar Pradesh. The other part of the large village, including JP’s ancestral house, falls in Bihar’s Saran Lok Sabha constituency. Some time back an idea was mooted to construct a ring dam (about 7.5 kilometres in length) from the Ghaghra river side for protection of the village from floods.

Nonetheless before Shah setting his feet in Sitab Diara, Nitish has launched a number of development works. He later said “in the year 2017-18, ring dam and other erosion prevention work was started and has been completed in Bihar. But work is pending in the Uttar Pradesh side.

Significantly Kumar’s visit to Sitab Diara signalled denial of any space to Shah in the region. Nitish is determined not to allow Modi and Shah combine to usurp the legacy of JP.  Only a couple of days back Nitish inaugurated Jayprakash Narayan Smriti Bhawan-cum-library, a road to diara (riverine area) and also promised to upgrade the additional primary health centre (APHC) to primary health centre to PHC through video-conferencing. Kumar also said he has requested UP chief minister Yogi Adityanath to complete the pending works in Sitab Diara at the earliest.

Shah’s move has primarily two dimensions; first, as a part of its hero worship programme, the BJP’s chanakya aims at winning the sympathy of the people of Bihar and second to torpedo the move of the former socialist leaders who are scattered in other parties to present JP as the fulcrum of the socialist unity. The September 25 meeting of the socialists was a step in this direction, but later it was used as the forum to unite the opposition parties. Modi and Shah knows it very well that socialists and Lohiates have a strong base amongst the OBCs and EBCs across the country.

Already these two sections of the society are with the Socialists and Lohiates especially in the Hindi heartland. In fact even in the states of Karnataka and Odisha and to some extent in Telangana, they are with opposition parties. Obviously any move of the socialists to project JP as their leader would have serious impact and even make the section of some backward caste leaders who so far have been with BJP to switch over their loyalty to the reorganised socialists. Formation of the Mahagathbandhan has already shaken the base of the BJP in Bihar. It is not finding itself in a politically enviable position. The BJP leadership though claim to win all the 40 Lok Sabha seats in 2024, the reality is they are aware with RJD, JD(U)  and Left coming together they not even be in the position to win more than 5 seats.

The political and socio-caste equation in the state has undergone a major change. The BJP leaders are desperate to reclaim the support among these backward castes.  It cannot be denied that Bihar has turned into the laboratory for experimenting with new caste equation. The Kurmis of Bihar and UP have already extended their support to Nitish and those from Yogi’s state have invited him to contest the Lok Sabha election from Phoolpur

Shah’s visit is also seen in the backdrop of holding of bypolls to two assembly seats — Mokama and Gopalganj — on November 3. A win would boost the morale of the cadres and leaders. Shah through paying obeisance to Jayprakash would try to send the message that BJP cares for Bihar and Biharis whereas  the Mahagathbandhan leaders are merely concerned with grabbing power; the usual rhetoric of Shah.

BJP Gets More Political Concerns On Its Platter Before 2024 Polls
Posting....