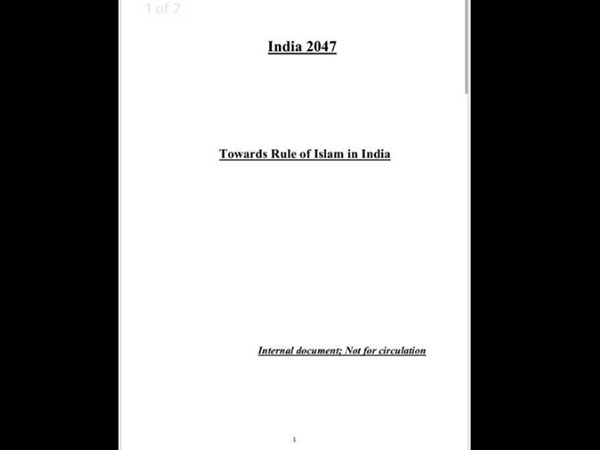 Those who wrote the PFI document, currently in circulation, to convert India into an Islamic state by 2047 know their English. The grammar is clean and it took the author just eight pages to conquer India lock, stock and barrel. The long and short of it is, Indian Muslims want to rule all over again. The British uprooted them, and the “cowardly Hindus” usurped in 1947. Now, 75 years on, there is this PFI document to restore Muslim rule in India.

Frankly speaking, it is ambitious, and it’s foolhardy. A bunch of wayward Muslims planning the overthrow of the Indian state. The question is, is it authentic PFI? So far, the document has not been denied by the PFI. And, the Government of India hasn’t reacted to the “chilling”, “sensational” and “shocking” plan….The PFI has to come out publicly about the origin of the document, otherwise, it will be used as a major weapon by the Hindu fundamentalists   to castigate the Muslim  minorities in   general.

“India Vision 2047” lays bare a plan to re-subjugate Hindus if only 10 percent of the Muslims rallied behind the PFI, which means not even 10 percent of Indian Muslims support PFI. But this didn’t stop the radical Islamists from dreaming ‘big’, preparing for an armed overthrow of democratic “secular” India.

The focus is to build a committed armed cadre, trained in using the knife and machete; the small arm and the heavier artillery. Along the way, get Islamic countries to help; force the Hindu-majority Indian state to its knees. Get Indian Muslims sold on the idea of an “Islamic Republic of India”.

The enormity of the task didn’t faze the planners. The 8-page document talks of getting the SC and OBCs to the Muslims’ side and winning a few dozen seats by fighting elections. But it is armed conflict that is the mainstay of the Popular Front of India’s plans for India.

The document and its contents does give the impression that some pretty sharp but relatively younger minds were at work. The training of the cadre-soldiers is rather rudimentary with small-arms weapons training and unarmed combat, like that imparted at China’s Shaolin School.

Maybe, training in the ‘Kalaripayattu’ of Kerala, which is where most of the PFI exploits are centred, and are reported from. Let’s not forget the Mopla rebellion that was influenced by the Caliphate. ‘India Vision 2047’ talks of the “friendly” country of “Turkey”.

For the PFI, the goal is “Towards Rule of Islam in India”. It makes an attempt to get Indian Muslims to rally behind it by keeping alive sore points that keep Indian Hindus and Indian Muslims apart. Clearly, the “two nations” theory which birthed Pakistan remains pregnant with the idea of the takeover of India

The “coward Hindus” and the “present state of Muslims” are juxtaposed for maximum effect. Perceived victimhood runs in a thick vein throughout the narrative. That said, there is nothing to betray anything ‘Mahatma-like’ in the telling. Ahimsa and Satyagraha are not in the PFI-playbook. The sword remains the tip of the Islamic conquests.

From “once Muslims ruled over majority Hindus” to “Muslims have been reduced to the status of 2nd class citizens” to “but for the British we would still be ruling”, and “there are 9 districts where Muslims are above 75%”, all these are trotted out to justify Indian Muslims coming together to overthrow “Hindu rule”.

The PFI document makes the claim that the government of India does not even “bother to consult Muslims on matters concerning Shariat” and how divisions among of Muslims are making things difficult. “The world looks at Indian Muslims as a model and the Indian Muslim community hopelessly waits for a miracle…leadership has to emerge from within the community…”

Many of us alive today will no longer be present in 2047, but no matter how impossible and ludicrous it may sound, the PFI document is upbeat—“We dream a 2047 where the political power has returned to the Muslim community from whom it was unjustly taken away by the British Raj. If we look into (the) history of Islam, Muslims were always in minority and for victory we do not need to have a majority…” (IPA Service)