Akhilesh Yadav Has Improved His Acceptability Through Long Election Campaign 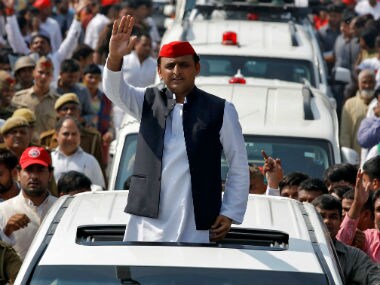 In the Uttar Pradesh’s assembly elections, the overriding perception is that Samajwadi Party chief Akhilesh Yadav is the man most likely to benefit from electoral tide.

Akhilesh Yadav is the complete antithesis of Chief Minister Yogi Adityanath. This is most marked in the language he uses in election campaign. Akhilesh does not make comments like garmi nikaal denge (will take out heat), but responds with witty quips. In this case, for instance, he asked whether Adityanath was a compressor to perform such mechanical feats.

The loss in the 2017 assembly elections and the dismal showing in the 2019 Lok Sabha polls had left Yadav embittered. After the losses, party men recall, he cut himself off from all contacts within the party. The 2019 results were especially painful, as his wife Dimple lost from Kannauj, the same city from where he launched a specially made “Samajwadi ittr”  (perfume).

In this election, Yadav is on his own. In 2012, although he had almost single-handedly stitched together all the elements that ousted Mayawati-led BSP government, he was not the party’s chief ministerial face. His 10,000-km yatra through the state had even heard the admiration of Rahul Gandhi, who was unable to forge the people connect that Yadav seemed so adept at doing.

The change was visible on the ground then, with him denying tickets to strongmen such as Dharam Pal Yadav. And then, there was his humility. After the victory, he quickly dismissed speculation that the new government would demolish statues and memorials built by Mayawati, saying that the vacant space would be used for public facilities and such as hospitals.

Akhilesh Yadav of 2022 is a very different man. Gone is the very strong backing of his father Mulayam Singh, who is unwell. In Karhal, from where Akhilesh is contesting, Mulayam addressed his first rally in this election season. But he forgot to mention his son’s name, saying instead “vote for whoever the candidate is”, a lapse that Adityanath took a swipe at. His reconciliation with his uncle, Shivpal, too, is half hearted, what with him giving just one seat to Shivpal’s party.

Yadav’s strategy this time has been to stitch together a coalition of small, caste-based parties which can fill in the gaps in the SP arsenal. It has generated resentment among party leaders who had been working for the last five years in the hope of getting ticket.

Ram Bishun Azad, former MLA from Mankapur, is one of them. In the 2017 elections, he finished third, which he said was because his name was announced very late and he got just nine days to campaign. “Akhileshji had asked me to fight the elections, and to keep working hard”, said Azad. Yet, the seat went to Ramesh Gautam, who was expelled from the BSP for anti-party activities. “My years of dedication counted for nothing and a man who had joined the party just four months ago got the ticket. It was humiliating”, said Azad.

There are many like Azad. A few got tickets, but were told not to file their nominations. Some of them said Yadav was burnt in effigy at many places and that official candidates were being actively opposed by local party units. They also said Yadav’s manner of decision making, where it was completely unclear what criteria was used to distribute tickets, was unlike what happened when Mulayam was party president.

The SP’s most prominent allies in this election are the Rashtriya Lok Dal (RLD) and Suheldev Bharariya Samaj Party (SBSP). The former is led by Jayant Chaudhary (son of late Ajit Singh) and later by Om Prakash Rajbhar.

Traditionally, the RLD has a strong grip over Western UP, where the jats, though not numerically dominant, are an influential caste. It is, however, a waning grip as in elections of 2017, the RLD’s score was zero.

It is also a party with a history of allying with political outfit of different ideologies. In the 2002 assembly elections, it sided with the BSP. Two years later in the Lok Sabha elections, it struck an alliance with the SP and then moved on to the BJP in the 2009 Lok Sabha election. In 2014, it shifted its allegiance to the Congress-led United Progressive alliance. In the possible Scenario of SP not emerging as the single largest party, and the governor inviting the BJP to form the government, another shift by the RLD cannot be ruled out.

Sudhir Panwar, a senior SP leader from Shamli in western UP, however, said the RLD was unlikely to ditch alliance. “The BJP tried hard to bring the RLD to its fold, but the party did not go with it. This is a different kind of election where the search is for an alternative to the BJP”, said Panwar. “It was the public which first decided that the SP would be that alternative and then the RLD joined it.” (IPA Service)